Penny and “The Legs”

I was born in Jerusalem, Israel in the early fifties, and began my lifetime love of travel less than two years later. My parents moved us to Montreal, Canada. According to my mother, I was the only one on the plane who expressed enthusiasm for the turbulence by squealing ”hop-lah” while everyone else around us was turning green.

Although it had been set in stone that I would be a fearless traveler, circumstances managed to chip away at that rock. For one thing, my parents were less than adventurous when it came to traveling. For another, I was legally blind, and according to the conventional wisdom of the day, it was paramount that I be kept “safe from harm.”. Therefore, my wanderlust was suppressed until I graduated from college, got a job and took off for parts previously unknown. And I haven’t looked back!

In order to fund my exploits, I worked in public relations, public education, community outreach, and corporate training, with a brief, but deliriously happy and intellectually satisfying, stint as Health Science Specialist in Rehab Research and Development at the Atlanta VA Medical Center. An integral part of these and other jobs was writing, but it didn’t hit me until just over a year ago that I could be a writer in my semi-retirement. By this time, I was living in New Bern, North Carolina, and had been working as a part-time staff writer and columnist for The County Compass, a local weekly newspaper.  So the idea of writing as a full-time career didn’t seem like such a huge leap.

Simon and I closed our auto repair business, enrolled in several writing courses through American Artists and Writers Inc., and went live with TwoWriteHands. We resuscitated websites on life support, produced e-newsletters, wrote, edited and managed web content and provided a host of other services for professionals.

The last piece of the puzzle fell into place in early 2013 when my husband and I along with my current guide dog visited England and Israel. My editor asked me to write a series about this two-week adventure, and as I was happily complying with his request, the light bulb went on. In fact, it was so bright that even I, who am almost totally blind in both eyes, could see it. “I’m a travel writer,” my inner voice screamed. And so now here I am, writing my own blog, while seeking out opportunities to travel, write, inform,  and entertain.

As I look back, I am keenly aware that, although I did do some traveling on my own, I owe a huge debt of gratitude to my husband, Simon, my sons, Kevin and Gary, an assortment of friends and of course, the four guide dogs who, in his or her own special way, made my travels immensely pleasurable.

Looking forward, not being tied to a desk will make it easier to move around the planet. Simon recently was told by me that he will be my photographer, and he is very much on board with the idea.

Now, I would like to introduce you to my four-legged traveling companions, past and present. They truly added a hefty dose of love, laughs and independence to my wanderings that I never would have enjoyed without their sweet and loyal presence. 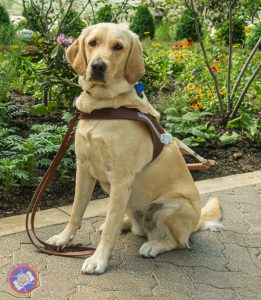 Welcome. My name is Splendid, AKA Splendida, Missy, Prissy Missy, Miscreant, Splendida Miscreante, Marshmallow, and Sweetie Splendidie. I was born in San Rafael, California, and was raised in San Antonio, Texas. It’s a good thing I had such excellent raising and training because I was given double duty with Penny. Aside from the usual job of keeping her from running into people and objects, walking into traffic, and falling downstairs, I needed to help her heal from a tough year when she lost Otto and almost lost her life. Of course, I’m up to the task, because I’m much more than a pretty face and elegant body. I’m smart, playful, and know-how to worm my way into people’s hearts. So far, I’ve traveled to three countries outside the US with Simon and Penny, but I hope there will be many more. I plan to put a lot of miles on these paws and visit a lot more countries, that is of course if Penny stays out of hospitals, orthopedic clinics, and trouble in general. Wish me luck! 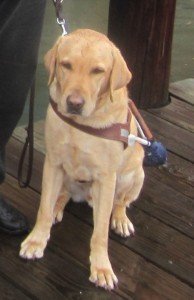 I was born on the campus of Guide Dogs for the Blind in San Rafael, CA, and was raised in Phoenix, AZ.

Like Penny, I love to travel. Since November of 2011, when I assumed ownership of the home she shares with Simon in New Bern, NC, I have managed to visit a total of 17 different countries including Israel and Jordan in the Middle East, numerous countries in Europe, Canada and Panama.

So far, I’ve heard “beautiful dog” in several languages, and, based on my paws-on research, I’ve found that my “nobody loves me, nobody feeds me.” look translates perfectly in all of them. 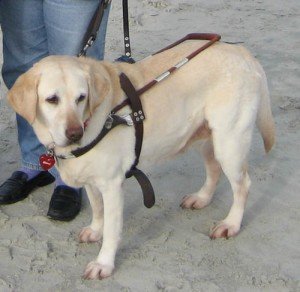 Hello, my name is C.J.. I was born on the campus of Southeastern Guide Dogs in Palmetto, FL, and was raised in the same state.

Even in my long cushy retirement, I was not too old to remember my travels with Penny and Simon.

While we lived in Atlanta, we frequently drove to Knoxville, TN as well as visiting other parts of the USA such as Savannah, GA, Chattanooga, TN, Charleston, SC as well as Washington DC, Philadelphia, New York and various small communities in Maine. I was also fortunate to be able to travel to Europe to visit the Czech Republic, Italy and Switzerland.

Otto may be quite full of himself, but he’s got a long way to go before he puts as many miles on his paws as I did, and in as many places. Don’t tell him I told you, but he let me sleep on his bed any time I want to! 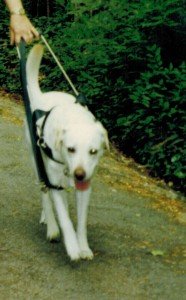 Greetings, my name is Buffy. I was born and raised in the same place as C.J. in Florida.

I was with Simon and Penny throughout Kevin and Gary’s growing-up years, and I had the best time traveling with the whole family.

My first trip was to Hilton Head, SC for a beach vacation. Too bad it rained almost all week. We did manage to go out on a boat to see the dolphins, who weren’t the least bit impressed with me. After that, it was trips to Savannah, Charleston, Disney World, New Orleans, Montreal, San Francisco, Colorado and Nevada to ski, and France, Germany, Switzerland, and Austria for educational purposes. In fact, I was the first to travel on a trans-Atlantic flight, so I think I’m top travel dog for now, at least!

During this time, I also did a lot of business travel with Penny to San Francisco and other big cities in the US. But one of my favorite trips was with Penny and Simon, while the boys were off at summer camp. We visited the Napa  Valley in California. Let me tell you, it was a hoot guiding Penny after about the third winery! 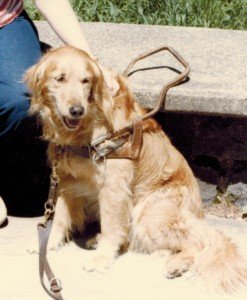 Howdy, my name is Regal. I was born on the campus of Guide Dog Foundation for the Blind in Smithtown on Long Island, NY, and raised in North Dakota.

I am proud to say that I was the first to join with Penny to make the Six Legged Traveler, although I didn’t get to visit as many places as the others. I lived in Montreal, and then we moved to Knoxville, TN. My travels included New York, Boston, New Orleans, Mobile, AL, and one beach trip to North Myrtle Beach, SC. On that trip, it didn’t rain, but it was hotter than pavement in August!

Since the boys were so young, we didn’t travel too far afield, but I was the one who stood beside Penny when she married Simon. And I was the one who welcomed each of the boys home from the hospital. Also, Otto doesn’t need to be so smug about traveling to England. After all, when my four legs were in service, the UK’s quarantine laws made no exceptions for guide dogs. 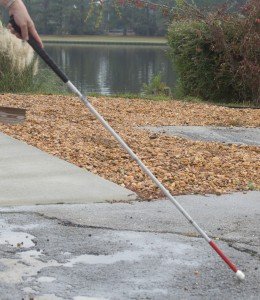 Hey, I’m Penny’s white cane, and I’m considered so unimportant these days that no one bothered giving me a name.

This may sound like sour grapes, but Regal conveniently forgot that I was actually the first to ensure safe travels for Penny. I went on her first trip to Israel, traipsed through Europe by train with her and her friend, Anna, and spent several interesting summer vacations on Cape Cod.

Until recently, I accompanied Penny and Simon on visits to England, Scotland, and Wales. And let’s not forget Penny’s solo Mediterranean cruise, which took us to Spain, Morocco, Tunisia, Italy, and France. Oh, what tales I could tell about that two-week party back in the mid-seventies!

I may be gathering dust, but I was the one who made Penny a three-legged traveler. Without me, Penny wouldn’t have had the mobility skills to make it to the six-legged stage. Sadly, no one ever called me,  “pretty cane,” or said, ”I wish my cane was as well behaved as yours.! I get NO respect!