The Alchemist, by Paulo Coelho 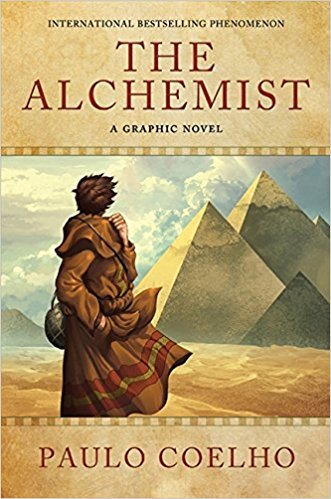 A Tale of Dreams and Personal Legends

It was Christmas, 2005, and one of my presents was an audio version of “The Alchemist” read by Jeremy Irons. Little did I know at the time what a precious gift it was.

Fast forward to summer, 2006 when Simon and I were driving between Atlanta and New Bern, as we prepared to change our lives forever. The book, which had lived neglected in my night table drawer became one of our road reads. It had been given to me by Sara, a delightful Swedish college student whom we had hosted for a year through GRSP, (Georgia Rotary Student Program). She was a sweet, sensitive girl, and I fully expected the book to be a touchy-feely story. Instead, it turned out to be a beacon of hope during a dark and confusing period of my life.

Without giving too much away, “The Alchemist” is the story of Santiago, a shepherd boy living in Spain’s Andalusia region. One night, he takes shelter in the ruins of an abandoned church and dreams of finding hidden treasure. Encounters with a fortune teller and an ancient king send Santiago on a long and complicated journey to Egypt to see the pyramids and secure his treasure.

The Type of Andalusia Scenery that Santiago Would Have Seen While Tending His Sheep (©simon@myeclecticimages.com)

The king gives Santiago two round balls from his breastplate and some advice about following his heart in order to find his personal legend. The last we see of this strange king is standing on a hill overlooking the Mediterranean, watching the boat carrying Santiago from Spain to Morocco cutting through the water.

Santiago’s journey almost ends before it begins, but following omens provided by the black and white balls given to him by the king, he presses on. It takes him more than a year, but Santiago finally sets off into the desert to find his treasure.

Several days into the journey, the camel caravan arrives at an oasis. There Santiago falls in love, discovers he has the power to predict the future and meets the alchemist.

The two travel into the desert alone and find adventure, imprisonment, and one hell of a miracle.

At a monastery, the alchemist cooks up some of his gold and sends Santiago off to see the pyramids.

By the time “The Alchemist concludes, Santiago has come full circle. I won’t tell you whether he finds his treasure or his personal legend. I won’t even tell you how things go with the girl at the oasis. What I will tell you is that nothing is as it seems.

Published in Brazil in Coelho’s native Portuguese in 1988, “The Alchemist” has since been printed in 70 languages. It has received glowing reviews worldwide. It has also been panned as a bad self-help book disguised as a fable. Some say it has changed their lives, while others blow it off as a piece of fluff. For me, “The Alchemist” turned out to be a well written, well-narrated story that held an important message.

At 163 pages, the book is a quick read both in print or audio. Jeremy Irons does a masterful job bringing Santiago’s story to life with his brilliant narration. I highly recommend listening to the digital audio recording even if you have already read “The Alchemist” in print.

As the miles flew by, I became more and more engaged in Santiago’s quest. After all, weren’t Simon and I seeking our own individual personal legend by leaving our lives and careers in Atlanta to open a business in New Bern in order to live a simpler life in a small town? The theme of finding one’s personal legend ran throughout the book and stuck in my brain. Another positive theme is if you really want something, the whole universe conspires to help you achieve it.

All this gave me hope for a positive outcome to the course upon which we had embarked. The problem was that I had no idea what my personal legend was supposed to be, and I had come to realize I didn’t want to make this move at all.

“The Alchemist” gathered dust for several years, until I read it again on a whim. This time, I was totally confused, and decided it was a simple allegory and nothing more.

My life seemed to be in turmoil. The recession was in full swing, our business was suffering, I hadn’t been able to find a job to help make ends meet and I had sunk into depression. It was around this time I started working as a staff writer for The County Compass, a local weekly newspaper. I had no way of knowing that this was the first phase of Coelho’s universal conspiracy.

To make a long story short, it was while writing for the Compass that we decided to get out of the business and begin traveling. My editor asked me to write several articles on our travels to England and Israel, and the light went on in my brain. My two passions have always been travel and writing. This was the first time they were combined.

It has been five years since that first trip and my editor’s request. When people ask me what I do, I proudly say, “I’m a freelance travel writer and blogger.” It’s what I do and what I love. The chain of events set off by my first travel articles for the Compass is long, but it consists of one fortunate event after another.

Today, I think of “The Alchemist” as an inspiring tale of hope, perseverance and destiny. I am happier and more fulfilled in my profession than I’ve ever been in my entire career. It still amazes me that I can wake up in Dublin and fall asleep in Madrid on the same day. Like Santiago, there were missteps and tough breaks, but I can honestly say I have found my personal legend.

“The Alchemist” may not promise miracles, but reading it will, at the very least, be pleasurable. At best, it will help you identify what you want most in life and set you on the path to making it happen. And when you do, I hope you, too, will have the universe on your side.