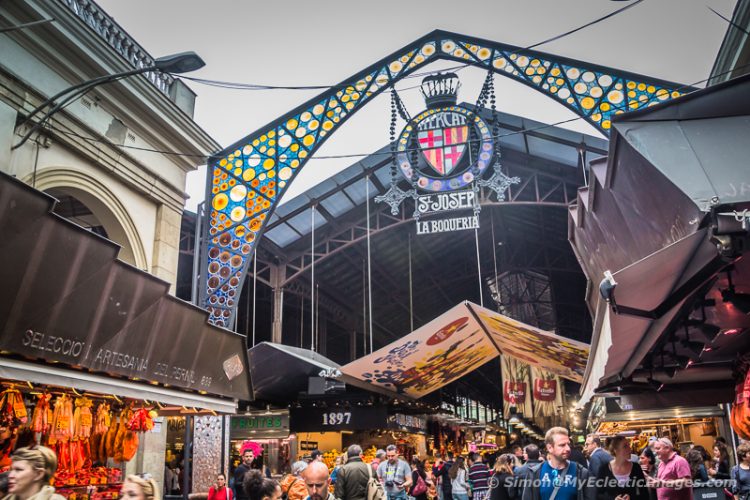 Barcelona, Spain was the site of our first Sandemans New Europe Walking Tour, a tip-based introduction to many major European cities including Barcelona. It was also a day of discovery, not only of Barcelona, but of how a tour guide can transform historical and architectural facts into a magical experience. This was how Simon, Otto and I met Leon Parris.

After two-and-a-half hours of delighting in Leon’s in-depth knowledge of his subject, insightful commentary and humorous story-telling, we were hooked. So we booked his Gaudi tour for the next day, and later found ourselves chatting at a local bar. There, we learned the story of this unique tour guide, his skills as a composer and performing artist and what made him so damn good at what he did.

Simon, Otto and I have been on a lot of walking tours with almost as many excellent guides. Sandemans City Tours prides itself on the quality of its freelance guides, and even among these knowledgable, entertaining professionals, Leon Parris stands out.

Leon Parris Expounding on His Philosophy of Life (©simon@myeclecticimages.com)

Born in Bedford, England, Leon began to display his talents at an early age. By the time he was two, he was a ballet dancer. By the time he was seven, Leon was dancing at the Royal Academy of Dancing in London, and as he put it, “Trying to teach ballet teachers how to teach the dances that they had to teach.”

Leon’s early experience as a dancer evolved into acting and singing, then musical theater. He wrote his first musical at 15: a gothic rock opera of “Paradise Lost”. But it was his second musical in 2000, “Going Once”, that earned him the first of several prestigious awards, including:

Fourteen years ago, Leon decided to leave England for a life in Barcelona, and has been writing musicals ever since. He married Karelys, the Venezuelan-born love of his life. The couple now has three adorable sons, the youngest of which are twins.

Following the birth of his first son, Leon was a stay-at-home dad for a year. Then decided it was time to explore new options. He settled on on a job with Sandemans, shepherding tourists around Barcelona, and introducing them to the city he had come to love deeply. “If you take a really obscure skill set and an embarrassing level of Spanish,” he concluded, “ I found my ideal job in guiding.”

Sculpture by Frederic Amat on the Side of the Ohla Hotel in Barcelona (©simon@myeclecticimages.com)

And Leon has been doing just that since 2013 when not writing.

A Love Affair with Barcelona

One of the elements that makes Leon a popular and successful tour guide is his genuine passion for his city. “Barcelona is a damaged sibling or cousin of all the European cities,” he explained, “and has been reinvented and trying to find its identity over centuries.”

The city has a sometimes bizarre past, and Leon is fascinated with the bizarre. He has a knack for bringing out Barcelona’s quirkiness through the stories he tells to keep his flocks of visitors to the city engaged.

Tiles Representing One of the Trades Typical of this Street in Barcelona (©simon@myeclecticimages.com)

“Barcelona moves at a speed that has a purpose,” Leon noted, and the purpose changes. Not like London which moves at a ferocious speed, or other cities that move at a monotonous speed. It has a slightly ADHD feel about it. Like let’s go, and ooo, there’s coffee.”

Leon loves Barcelona’s architecture, food, atmosphere and history. But what he loves most are her people. “They’re always smiling,” he said. “They’re happy and helpful.”

“Barcelona is a city of secrets and full of surprises,” Leon explained. “You turn one corner from Picasso’s first family home and studio in Barcelona, and your suddenly on the road where the most prolific serial killer in the whole of Barcelona’s history lived, and who makes Jack the Ripper look like Bambi. Turn another corner, and you’re in an indoor enchanted rain forest having a beer. Then suddenly you’re on one of the most famous roads in Spain, which is La Rambla. And you’re only spitting distance from a medieval castle, a royal pavilion and an Olympic stadium, all crammed into a small space.”

Barcelona can’t expand because of the sea on one side and the mountains on the other. He believes that’s the reason it’s always reinventing itself.

When Leon was in school, he hated history. He had a lack-luster teacher, and Leon was bored. One day, his teacher showed the class a historical TV program, and the boy suddenly became fascinated. He realized how history was presented made all the difference.

When he imparts the history of Barcelona, Leon is free with adjectives and expletives. He tells a story in a way that’s amusing and memorable, that sounds natural and not canned or rehearsed

Leon is a stickler for dates and details. “When I would go on a tours,” he explained, “and the guide talked about the middle ages, I wanted to know when in the middle ages. Was it a Tuesday? Did he have a dog? Was it in the afternoon? What did he drink?” In order to be a story teller, he needs that level of detail.

A Pasteleria in the Square at the Starting Point of the Sandeman Walking Tours (©simon@myeclecticimages.com)

Surprisingly, Leon gets nervous before a tour. He sincerely wants to be the history teacher he never had. “If you are not genuinely interested in in every iota of what you are saying,” he stressed, people will see through it in a heartbeat. When I started doing tours, I promised I would never tell people anything that I personally didn’t find utterly fascinating, or funny, or that I didn’t think was important for everyone to know.”

Leon recognizes everyone who has been on his tours if he sees them again, even several weeks later. He sees approximately 180 tourists a week, and stays in touch with many. “I don’t know if that makes me creepy,” he said, “or if it makes me cool.” From my perspective, its one of the many aspects of Leon Parris’s personality that makes him …well…unconventional.

The History of Barcelona in Verse

Next week, you’ll come along with us on Leon’s Gaudi Tour. Meanwhile, in order to give you an idea of his and diverse amazing talents, here is a brief, but telling, example. Enjoy!

Is there a tour guide that stands out in your memory? Tell us about it in the Comments.