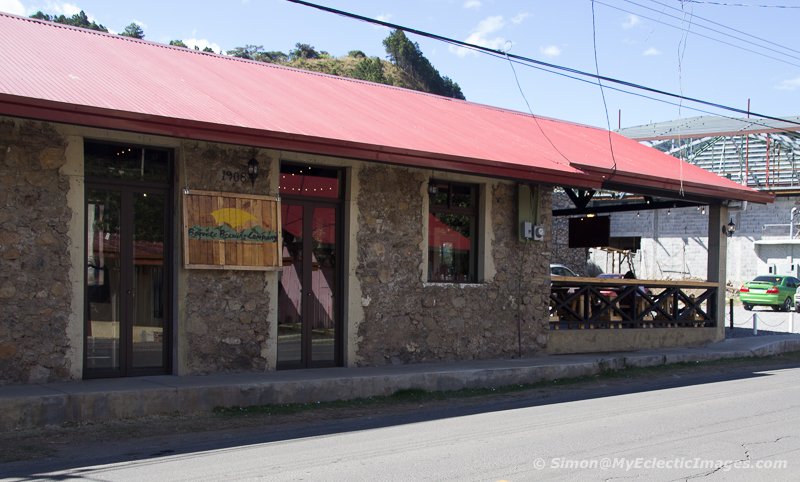 A Jewel of a Microbrewery in Panama’s Chiriqui Highlands.

The moment you enter Boquete Brewing Company, you know you’re in for a delightful experience. Walls decorated with beer coasters and drawings of the brewing process, tempting aromas wafting from the food truck just outside the covered deck and lots of smiling, satisfied customers give the game away.

The Food Truck that Serves as the Kitchen for the Boquete Brewing Company (©simon@myeclecticimages.com)

A friend took us to this thirst quenching oasis in a desert of mediocre beers shortly after our most recent arrival in Boquete. One beer and an order of wings later, we were hooked.

On a later visit, Doris Paredes, chef and part owner of Boquete Brewing Company, shared the recipe for the brewery’s success.

The Beer at Boquete Brewing Company

Boquete Brewing Company’s decor makes it crystal clear that its owners take beer seriously. The wooden Bar top is about 4 inches thick with corrugated iron in frames of wood down the side. A Copper pipe runs behind the bar and glass panels allow patrons to watch the beer being made.

James, the brewery’s talented and creative brewmaster, kept the beers originated by former owner and brewmaster, David O’Keefe,. But the ever-changing selection of seasonal beers are entirely up to James.

Hammock Time is one of the brewery’s most popular offerings, along with IPA Birdsong, SMASH (Single Malt Single Hop), American Ale and Brown Ale.

The Beer Menu at the Boquete Brewing Company (©simon@myeclecticimages.com)

Boquete Brewing Company also produces its own melon and orange hard ciders, and a variety of fruit flavored sodas. The ciders and sodas are made from local fruit, But the hops for the beer has to be imported from the U.S..

Along with the brewery’s flagship beers, and seasonal selections, guest beers from Panamanian microbreweries. “In Panama,” noted Doris, “members of the craft beer industry help each other out.”

As is the case with extraordinary beers, it’s the water that makes the difference between average and superior. Boquete Brewing Company takes its water from the nearby Caldera River. “This is high quality water,” Doris explained.

On our first visit to Boquete Microbrewery, we had the Golden Ale, which was light and refreshing. Later on, we sampled the IPA, Hazy Shades of Summer. True to it’s name, the beer had a hint of floral with a pleasant back end bite. Next we tried the SMASH This beer was full-bodied, and reminded me of beers I’ve enjoyed in England.

Golden Ale Made by the Boquete Brewing Company (©simon@myeclecticimages.com)

Doris has the ideal background to be both chef and part-owner of Boquete Brewing Company. She studied business in the U.S., then attended culinary school in Cambridge, MA. Once back in Panama, she owned a restaurant and a catering business before she and her husband became involved with the brewery.

All the food served at Boquete Brewing Company is prepared from recipes developed by Doris herself. The other common denominator is beer. Most of the brewery’s edible offerings are laced with it. And what a delicious flavor addition this ingredient provides to the experience.

Since the food truck serves as Boquete Brewing Company’s kitchen, the menu is somewhat limited. But what it may lack in the number of menu items, it more than makes up for in flavor. Along with popular items such as chili, wings and bacon cheese burgers, Doris offers daily specials based on fresh seasonal ingredients she finds at the market.

The Food Menu at the Boquete Brewing Company (©simon@myeclecticimages.com)

Each time we visited Boquete brewing company for a cold brew, we also indulged ourselves in an order of Doris’s wings. They come in two varieties: hot and asian. The former have a hint of curry, which gives them an extra kick of both heat and flavor. I have no idea what makes the asian wings so good, but they also have something unique that sets them apart from any asian wings I’ve ever tasted. This is by design, and not by accident. Doris purchases her wings from a distributor who provides her with exactly what she wants to serve her customers. “I hate small wings,” she said. Now everyone benefits from her distain for the mediocre.

Spicy and Asian Wings at the Boquete Brewing Company (©simon@myeclecticimages.com)

David O’keefe, an expat from Oregon, was the founder and original owner of Boquete Brewing Company, but later decided to return to the U.S.. A group of friends, consisting of four families bought the business from him. One of the partner families was Doris and her husband, Victor.

The brewery was half the size it is now, so the partners opted for a new and larger location. They worked hard to renovate a derelict 1908 abandoned home to house their dream. “It was a mess,” Doris recalled, but it had charm.” They kept the charm, but added strength to the structure, along with a new roof.

In November, 2016, the brewery reopened in its current location. The food truck enabled the partners to add a dining component to their already popular beers. With a seating capacity of 80 to 100 – more for special events – A lot of locals, expats and tourists are now able to enjoy the best Boquete Brewing Company has to offer.

The Food Truck at the Boquete Brewing Company (©simon@myeclecticimages.com)

The brewery presents live music two or three times a month, featuring classic and Panamanian rock. Keeping it in the family, so to speak, the lead singer in the band is none other than Victor Paredes.

What makes Boquete Brewing Company so special? According to Doris, “It’s that we’re in a unique place. The climate and the scenery are not what people expect when they come to Boquete. As for the brewery itself, it’s that we’ve really put our hearts and love into every single detail of the place. The beer and the food are a labor of love, and I hope people feel that when they come in here.” If our experience is anything to go by, Boquete Brewing Company is a shining example of what creativity and commitment can accomplish.

Keep up with all the happenings at Boquete Brewing Company through their FaceBook page.