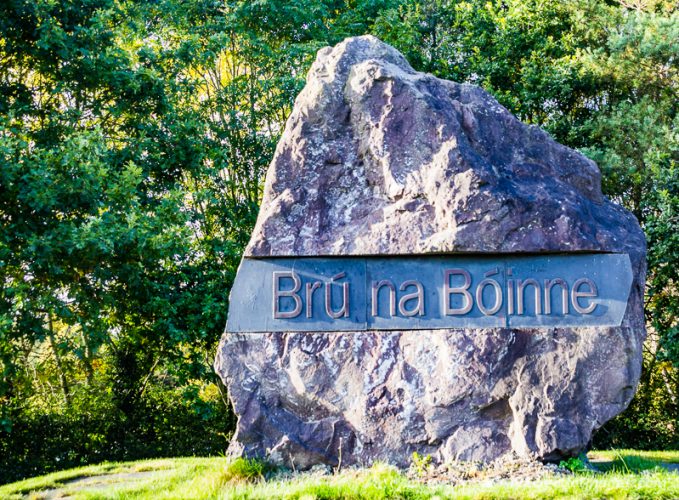 A Journey Into Ireland’s Neolithic Past

Imagine driving through a modern residential neighborhood in Ireland. Now imagine standing among Neolithic burial mounds from the late Stone Age minutes later. A scene from a science fiction movie? No, this is the reality of Brú na Bóinne, a UNESCO World Heritage Site and the location of mysterious ancient structures that generate more questions than answers. A View of Newgrange from Knowth (©simon@myeclecticimages.com)

Approximately 25 miles north of Dublin and five miles west of the historic town of Drogheda, in County Meath, Brú na Bóinne lies in a bend of the River Boyne. This archaeological treasure contains large and small passage tombs that hold the still untold history of the people who once lived there. Knowth and Newgrange were the areas Simon, Otto and I had the privilege of visiting on a crisp fall day.

Preceding the pyramids of Giza by 500 years and Stone Henge by 1,000, the mounds of Brú na Bóinne were constructed 5,000 years ago. These tombs contain 60 percent of the megalithic art to be found in Western Europe, and a visit to the site will leave you totally baffled as to the hows and whys of their existence.

Preparing for Your Journey Back in Time

The only way to access the sites at Knowth and Newgrange is by taking the tour beginning at the Brú na Bóinne Visitor Center. The center is located on the south side of the River Boyne overlooking the heart of Brú na Bóinne.

Inside we explored exhibitions describing what we know of Neolithic life: tools, weapons and domestic articles, with a focus on how the mounds were constructed. A haunting audio-visual presentation described solar alignments and how the ancient people of the Boyne Valley relied on them as symbols of consistency in their lives.

A Model of the Development at Knowth in the Vistors Center at Brú na Bóinne (©simon@myeclecticimages.com)

The extensive exhibition also contained a partial full-scale replica of the chamber at Newgrange as well as a replica of one of the smaller sites at Knowth.

We learned that construction of the passage tomb – burial sites containing multiple entrances with passages converging in a single large chamber – of Brú na Bóinne is believed to have begun around 3300 BC. The area contains at least 40 of these passage tombs, which indicate the builders had advanced knowledge of architecture, engineering, astronomy. Appreciation and talent for creating art is also present.

One of the Passages Running through the Large Mound at Knowth (©simon@myeclecticimages.com)

Based on artifacts found in the surrounding area, the landscape at that time was agricultural. The society was organized and stable with its own rituals related to life, death and rebirth.

Before our brains could get too saturated with information, we boarded the shuttle bus that would transport us back in time to Knowth.

Our first stop at Brú na Bóinne was Knowth, which dates back to around 3,500 BC. The area consisted of one large mound surrounded by 18 smaller ones.

Some of the Smaller Mounds at Knowth (©simon@myeclecticimages.com)

Our guide informed us that these tombs were used for 200 to 300 years. During this time, the dead were cremated outdoors, and the ashes put in the chambers. Later, wooden henges were used for about 60 years. The site was abandoned for 2,000 years, skipping almost the entire Bronze Age.

The Remains of One of the Smaller Mounds at Knowth Illustrating its Construction (©simon@myeclecticimages.com)

During the Iron Age, the inhabitants built their houses on top of the mounds and dug deep trenches around the perimeter for protection for themselves and their livestock from wild animals and other attackers. The dead were buried in a fetal position in stone-lined graves.

Romans, Vikings and Normans came and went, and the mounds kept their secrets through it all.

One of the most arresting aspects of Knowth is the bounty of stone carvings. No one knows what they mean, but theories abound. Were they merely decorative? Perhaps an early form of writing? Did they list the names of the dead buried in the tombs? Or were they maps?

One of Many Stone Carvings at Knowth (©simon@myeclecticimages.com)

Another mystery is how the stones, weighing several tons and made of sandstone, were brought to Knowth from over 10 miles away. At that time, there were no horses or moving machinery

Our tour took about 40 minutes, then we were given time to wander the site on our own. Simon, ever searching for that special shot, climbed to the top of the central mound to see what he could see. and then we boarded the shuttle for Newgrange.

No visit to Brú na Bóinne could be complete without a tour of Newgrange, an enormous mound built in 3250 BC, which stands on an acre of land. Following a brief tour around the area, our guide led us inside to witness a simulation of what was, and still is, the main event.

The Primary Mound at Newgrange (©simon@myeclecticimages.com)

Before entering the mound, we took time to marvel at the 97 large kerbstones, carved with many geometric designs. The most intriguing symbols were the ones on the largest stone near the entrance. Triple spiral, double spirals, concentric semi-circles and lozenges added to the mystery of the place.

Entrance to the Mound at Newgrange Showing the Roof Box (©simon@myeclecticimages.com)

Above the entrance was an odd-looking opening that runs above the passageway known as the ‘roof box’. It brings light into the interior chamber, which is oriented to not the summer solstice sunrise, as you might expect, but to the winter solstice sunrise

We entered the low narrow passageway, which ran about 60 feet directly into the chamber. Three side recesses greeted us. The elaborately decorated corbelled vaulted roof high above us has remained solid and watertight throughout the millennia without any human intervention. The mound itself is estimated to weigh 200,000 tons, supported by 97 mammoth kerbstones at its base. They definitely don’t make roofs like they used to

Entering the chamber, we were greeted by three recesses. The largest on the right was the most ornately decorated. Two nested solid granite basins demonstrated the extraordinary skill of the Neolithic crafters. Consistent with all the archeological treasures at Brú na Bóinne, no one is certain what the purpose of these basins might have been.

At the rear of the center recess stood a triple spiral carving identical to the giant stones outside.

The realization that we were standing inside one of the oldest manmade chambers in the world took my breath away. And then our guide killed the lights.

What followed was a simulation of the event that has been taking place every December 21st at dawn since Newgrange was constructed. Light gradually poured through the roof box until the entire chamber was illuminated with a warm glow. Then the light began to recede until we were in darkness once more.

This event occurs on six consecutive days beginning December 21st, and you have to be the winner of a lottery in order to be one of the fortunate few who have the privilege of witnessing it in real time.

Newgrange lay unused and untouched for millennia until 1699, when the entrances were accidentally found. Workers made the discovery while removing material from the mound for the construction of a new road.

Excavation didn’t begin until 1960. Ashes, teeth and other items confirm that Newgrange was a burial mound. Unfortunately, it is now impossible to determine how many were buried or who they were, since no one knows how many articles of historical value were removed since the 17th century.

Newgrange has been reconstructed using white quartz and other materials found onsite. Placements were carefully calculated by measurements taken from the retaining wall that had collapsed long ago.

Walking among the mounds of Brú na Bóinne felt like an alternate reality. Surrounded by the silence and solemnity of a distant past. My thoughts were of unsolved mysteries and haunting possibilities. Perhaps some of these secrets will be discovered in time, but for the present, you can find much to learn and to fuel your imagination at Brú na Bóinne.

The Visitor Center is the starting point for your venture to Newgrange and Knowth. A shuttle bus runs to and from the sites. The last bus leaves the Center 1 hour and 45 minutes before closing. Along with the exhibit and audio-visual presentation, the Visitor Center offers tourist information, a tearoom, a picnic area and parking.

You can purchase tickets online from 3 months to 36 hours in advance. While you may be able to purchase tickets on a walk-in basis, it’s recommended you book online to guarantee your place on the tour. Be aware that work is ongoing at the sites.

Brú na Bóinne is open year round with the exception of December 24th, December 25, December 26, and December 27.

For more information, email info@discoverboynevalley.ie, or visit the website.

Disclaimer: This experience was made possible through the generosity of Brú na Bóinne. However, all opinions, as always, are entirely my own.