An Eyeful From the Observation Deck at Central Place, Arlington: 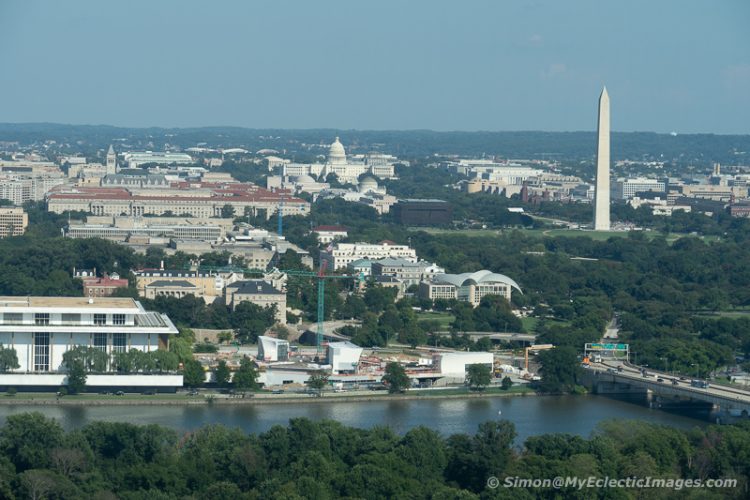 Far More than a Tower with a View.

Washington, DC lay spread out before us: a history junkie’s buffet of iconic buildings and monuments. Through the floor-to-ceiling windows of Arlington’s brand new Observation Deck at Central Place, we took in a 360 degree panoramic view of our Nation’s Capitol, lush green spaces, the Potomac, Georgetown, parts of Virginia and Maryland, and, of course, Arlington itself.

The Wooden Bench that Encircles the Observation Deck at Central place, Arlington (©simon@myeclecticimages.com)

Our guide was Cleon McMillan, Sales and Marketing Manager for Arlington’s newest attraction, and we could sense the pride he took in his job and his city with every word he spoke. The Observation Deck at Central Place is the jewel in the crown of the Beltway beauty called Arlington, and Cleon seemed happy to spend the better part of an hour showing off the unique features of this 32 floor, 390 foot tall office tower and 12,000 square foot observation deck.

On June 21, 2018 – just in time for Summer Solstice – the Observation Deck at Central Place opened to the public. Conveniently located across the street from the Rosslyn Metro Station, it is the tallest building inside the DC Beltway. Legends, the firm famous for the One World Observatory in NYC designed the space. The tower is a prominent part of the Central Place complex of two-towers featuring 377 apartments, approximately 500,000 square feet of office, and retail space, as well as a large open plaza

Cleon led us to a spacious glass-enclosed elevator, which smoothly soared up to the observation deck. He noted that when the timing is right, he can make the sun rise or set in eight seconds.

To say the view through the non-reflective glass was spectacular would be a gross understatement. As we walked the circumference of the Observation Deck, we were treated to views of DC and all 64 miles of the Beltway surrounding it. Along with DC’s iconic buildings and monuments, we caught glimpses of airplanes preparing to land at Ronald Reagan Washington National Airport. They flew by low and close, but Cleon noted that they often come lower and closer than that, especially in the spring.

It would have been enough to drink in views of FedEx Field, Tysons Corner, The Capitol, The National Cathedral, the Washington Monument, the Lincoln Memorial, and more, but the interior of the Observation Deck had magnetic charms of its own. To begin with, the gray concrete-like flooring sported large letters – N S E W – indicating which direction we were facing.

A light colored laminated wood bench circled the wall opposite the window. The circle was broken in several locations by elevators, restrooms, and doorways. But this was no ordinary bench. The back swept upward in a wide, graceful arc. Light and shadow played off the surface creating an unusual and eye-pleasing effect.

The Wooden Bench and Gallery that Encircles the Observation Deck at Central place, Arlington (©simon@myeclecticimages.com)

“Windows Into History” offers visitors information about specific views. Fourteen 55 inch monitors with interactive touch screens displays are strategically placed along the window wall. They explain what is in front of you and asks questions designed to make you think.

In an interactive hologram experience,, historical figures, such as Frederick Douglas, and Susan B. Anthony, come to life to tell their stories when you step into their footprints.

A small cafe offers panini, snacks and drinks, including wine, and an impressive selection of local beers. Instrumental music plays at just the right level as you sip, munch sit or wander the Observation Deck.

At the complimentary selfie station”, you can take a photo of yourself with the Washington Monument and Mall in the background.

One floor up from the Observation Deck is a massive cantilevered outdoor terrace that runs three quarters of the way around the building. For some reason, there is no North-facing view. So, if you want to see the National Cathedral, you’ll have to admire it through the glass one floor down.

View of the National Cathedral from the Observation Deck at Central Place, Arlington (©simon@myeclecticimages.com)

Cleon reminded us that we were 430 feet above sea level. We felt a warm wind blowing through gaps, just large enough to lose a cell phone, in the thick eight foot high glass walls. We took in heart-stopping views of the Pentagon and Arlington National Cemetery. Cleon pointed out the Masonic Temple in Alexandria, whose shape is identical to the ancient lighthouse in Egypt.

Looking Over Arlington Towards the National Cemetery and the Pentagon from the 32nd Floor of Central Place (©simon@myeclecticimages.com)

From our vantage point we could see heavy traffic for which the DC Beltway is famous. But we also witnessed the good people of Arlington walking, cycling and zipping around on scooters. The Observation Deck was a tantalizing appetizer for the historical and sensory Arlington feast in which we were about to partake. If you plan to visit the Nation’s Capital, friendly, walkable, Arlington is a convenient place to spend some quality time.

The Observation Deck at Central Place is open daily from 10:00am to 8:00pm.

The Observation Deck at Central Place conforms to ADA regulations.

Advance purchase tickets cost $21.00 and $22.00 at the door. Reduced prices are available for students, children, seniors and the military. Admission is free of charge for Arlington County residents.

Our visit to Arlington was generously hosted by Stay Arlington, however, all opinions, as always, are entirely my own.

Do you have a favorite location with a stunning 360 degree view? We’d love to hear about it in the comments.