Discover the Charms of Cesky Krumlov: 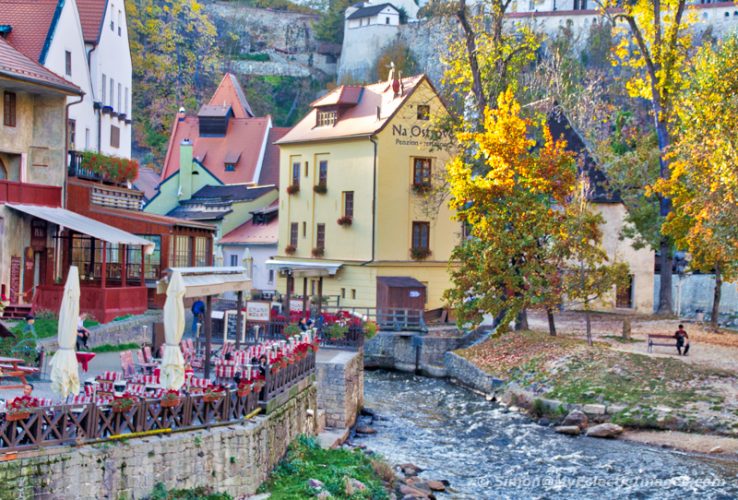 This Czech UNESCO World Heritage Town Will Steal Your Heart.

Cesky Krumlov was our final destination on the first day of our October, 2017 road trip from Prague into Slovakia and back. We heard and read about how enchanting it was, but so were the other towns at which we stopped on our way to Cesky Krumlov. What we experienced was one-and-a-half days filled with one unexpected delight after another.

Travel approximately four hours by car south from Prague, and you’ll find Cesky Krumlov tucked neatly into the hills of the South Bohemian region of the Czech Republic. The town is divided by the Vltava River, which begins its journey in the mountains, then twists and turns its way through Cesky Krumlov and Prague and on into Germany. In Cesky Krumlov the Vltava forms a natural moat that once protected the town’s crowning jewel, Cesky Krumlov Castle.

Part of Cesky Krumlov Castle and the Vltava (©simon@myeclecticimages.com)

Cesky Krumlov began as a medieval town, and has preserve the architectural integrity of many of its historic buildings through the centuries. Remarkably, the town has also retained its layout of cobbled streets.

Exploring Cesky Krumlov both with a guide and then on our own was an education and a true pleasure. Although our ramblings covered much of what there is to see in Cesky Krumlov, another day or two would have been even better.

As is our habit when visiting a new destination, one of the first things we did upon our arrival in Cesky Krumlov was to book a walking tour. Our guide, Bobbesh, covered the history, architecture and culture of the town he obviously loved with accuracy and a dry sense of humor.

We began in Old Town; a pedestrian friendly maze of winding cobbled streets. As we walked, Bobbesh pointed out colorful Gothic and Renaissance frescoes on historic buildings. He explained how these frescoes had been painted while the plaster was still wet, allowing the colors to last far longer than if the plaster had been allowed to dry. This was fortunate because during the Baroque period, the frescoes were whitewashed to conform with the fashion of the day. The frescoes have now been restored, and the original colors once again grace the buildings of Cesky Krumlov.

A Building Frontage with a Restored Medieval Fresco in Cesky Krumlov (©simon@myeclecticimages.com)

We left the winding streets, squares, shops and restaurants behind, and walked to the center of the Barber’s Bridge that connects Old Town with the castle. Below us, the Vltava River flowed gently into the distance.

In the 1960’s a new hydro-electric plant provided Cesky Krumlov with electricity and protected the towns from regular flooding. This system worked well until 2002, when it failed. to prevent a major flood from engulfing Cesky Krumlov. The water reached the 500 year flood level, and according to Bobbesh, we would have been knee-deep in water had we been standing on this very spot on the bridge..

Bobbesh noted that Cesky Krumlov survived because the buildings were built with regular flooding in mind. He also noted that many had been built with disproportionately large corner stones to protect them from damage caused by horse-drawn carriages

Since our tour was scheduled for the afternoon, we had the foresight to visit the castle in the morning. The powers that be don’t permit indoor photography, so we have little to show for our time besides our memories and my recordings of the tour narrative. But the castle interior is a story for another time.

Originally constructed by the Vítkovci family in the 13th century, and rebuilt in the 16th century, Castle Český Krumlov.  is the second largest castle complex in the Czech Republic. To no one’s surprise, Prague Castle is the largest.

Throughout the centuries, Cesky Krumlov was ruled by powerful families. The Rosenberg family occupied the castle from the 14th  century, until the 17th century, when they sold it to the House of Schwarzenberg. This family held court until the castle was nationalized in 1947.

The Cesky Krumlov Castle Tower Dominating the Skyline Above the Old Town (©simon@myeclecticimages.com)

Perhaps the most striking aspects of the castle is the round tower with its profusion of vibrant colors. The famous Czech writer Karel Čapek called it “the most towery tower of all the towers in the world.” Simon climbed the 162 stairs, and was rewarded with a magnificent panoramic view of the town, the river and beyond.

The castle is comprised of five courtyards and 40 individual buildings surrounding the main structure. The first courtyard was used for economic affairs. The large building. directly inside the gate was the former salt house. At one time, salt was used as currency and called white gold

The second courtyard served as the administrative center for the castle. Bobbesh pointed out a building constructed at the end of the 17th century. It was to be used as a mint for coins. It took 30 years to build, but it was never used as a mint.

The Outhouse High on the Castle Wall (©simon@myeclecticimages.com)

Bobbesh drew our attention to a red-roofed rectangle protruding from a castle wall. This might very well have been one of the first ensuite toilets in history. Of course, there was no hot shower, and anything that left your body splattered onto the rocks below, but at that time, it was considered a royal luxury.

The 15th century Gothic-Church of St. Vitus, occupies a place of prominence on the castle grounds. Bobbesh noted that the castle tower was slightly higher than the church tower, which left no doubt as to the Rosenberg’s sense of their importance.

Also on the castle grounds is the 1680 Baroque theatre, built by Prince Johann Christian I von Eggenberg for the elite to enjoy elaborate melodramas. It was renovated by Josef Adam zu Schwarzenberg in 1765, adding updated stage equipment. This unique Baroque theater is one of only two surviving structures of its kind. The other can be found in Stockholm.

A View of Cesky Krumlov from the Castle Tower (©simon@myeclecticimages.com)

The Inner Courtyard of Cesky Krumlov Castle as Seen from the Castle Tower (©simon@myeclecticimages.com)

Our tour ended at the bridge leading to the castle’s gardens. This large manicured expanse sports a fountain with an exquisite sculpture of Neptune at its center.

On the down side, the Rosenberg began keeping bears at the castle in the mid-16th century. In accordance with tradition, the bears are still kept at the castle, and you, along with a throng of other gawking tourists, might catch a glimpse of one. Personally, this was an aspect of the castle I could have done without.

What to Do in Cesky Krumlov

Our walking tour with our charming guide, Bobbesh, and the castle tour were easily accomplished in one day. Unfortunately, that was almost all the time we had. Plan to spend more time in this fairytale town, and you’ll find lots more to see and do:

Is there a town to which you would love to return? We’d love to hear about it in the comments.

Learn more about Cesky Krumlov at:

The Castle Museum and Tower are open all year round:

The only way to see the interior of the castle is through a one-hour guided tour. Photography is prohibited within the castle, but the exterior is a photographer’s paradise.

The castle interior is closed from November through March and no guided tours are available. Visit the castles’s official website for hours and ticketing information.