Vic the Chili Man and the Hotdog Revolution: 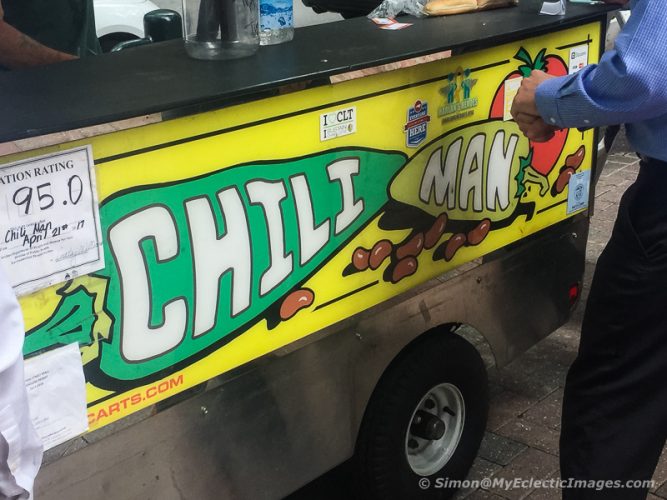 His Deliciously Unconventional Line-up keeps Them Lining Up.

The next time you’re in Charlotte, NC, head uptown to the corner of 4th and Tryon streets. There’s something I’d like you to see. I can just hear you say, “A hotdog cart?” But stay with me here. Acquaint yourself with Victor Werany – AKA “Vic the Chili Man” – and his array of home made creative hotdog add-ons. Trust me. You’ll never look at a hotdog the same way ever again.

Since Vic the Chili Man first set up his cart in 2004, bankers in business suits, delivery workers in T-shirts and helmets, and those sporting every form of attire in between choose to spend one or more week days a month standing in line for their favorite Chili Man concoction. But it isn’t only the food they come to enjoy. It’s Vic’s ability to joke and engage in lively banter with his customers that has them standing in line for up to an hour for their hot dog fix.

The Line of People Waiting to Pick Up Lunch From Vic the Chili Man (simon@myeclecticimages.com)

When Vic first obtained his license to operate his street food business, he thought he had landed a terrific spot. Then he learned the building he was in front of had been vacant for at least a decade. And at that time, the area was used as, among other things, an outdoor lavatory for the homeless.

Now the neighborhood is completely transformed, and the building is occupied by businesses and condos. With Bank of America only two blocks away, and the likes of Michael Jordan choosing to purchase a condo nearby, you know you’re sitting on prime food cart real estate.

So, what’s so special about a hotdog from Vic the Chili Man? Well, plenty. For one thing, Vic only serves up Khan’s Hotdogs from Cincinnati. As far as he’s concerned they’re the best, and not just because they’re the official hotdogs of the New York Mets. He wasn’t able to get Khan’s one day, so he substituted another quality dog. His customers noticed, and gave him hell.

Customer input is important to Vic. When the hotdogs increased in price, he offered his customers a choice between using a less expensive hotdog and a price increase. He let them try the new dog, and it was unanimous. They preferred to pay an extra quarter to keep the current base for Vic’s magic

The next thing that makes Vic the Chili Man’s dogs special is what he does to them. Think Cinderella. He takes a simple hotdog, and dresses it up for gastronomical prime time. Here are two examples:

Vic the Chili Man Hard at Work Creating One of His Tasty Dogs (simon@myeclecticimages.com)

You’ll also find dogs dressed with mac and cheese, bacon and chili, humus with black olives, crushed felafel and home made harissa sauce, pesto, peanut butter, jam, Fritos and a whole lot of other things you’d never thought you’d ever see on a hotdog. “That’s the reason I’m so popular,” Vic explained. “I’m taking chances. I’m out there on the edge, doing things with hot dogs no one ever has. I’m trying to change the whole hot dog industry.”

Vic makes almost everything himself: mustards, ketchup, six or seven different types of chili and about 15 BBQ and other sauces. No, he doesn’t make the buns, but he thought about it.

For his vegetarian customers, Vic has meatless hotdogs and chili. “People who don’t see vegetarians as customers,” he noted, “ are losing out .”

Out of the Mouths of Customers

When we recently visited our son, Kevin in Charlotte, he raved about Vic the Chili Man, insisted there was a worthwhile story here and proceeded to warn Vic of our impending visit. That was how I found myself walking the line in front of Vic’s cart on a hot August afternoon recording what the Chili Man’s customers had to say about Vic’s dogs. Here’s a small sampling.

Vic grew up in upstate New York. He was living in Oswego and engaged to his wife, Tara, when his North Carolina odyssey began. “It’s the place that Santa Claus moved away from, because it was too cold,” Vic said of Oswego. So he and Tara headed south, settling in Wilmington.

The couple worked and saved up enough money to travel around Europe for six weeks. Then, since they didn’t kill each other on that trip, they decided to get married.

In 1995, Vic and Tara relocated to Charlotte. It was Tara, a Bank of America Vice President, who came up with the idea of the food cart, which would enable Vic to be available for their two children when they came home from school. Vic had been working in the food business for many years, and truly loved it. He had also worked as a comedian and actor. The combination of food savvy, gregariousness and off-the-wall sense of humor turned out to be a killer recipe for success.

It usually takes Vic three hours to prep his cart in the morning, and about 45 minutes to set up when he arrives at his spot. Closing down takes from an hour-and-a-half to two hours. In between these activities, Vic holds court wearing a baseball cap worn backward and a smile for everyone who stops by his cart.

Vic the Chili Man Chatting with His Customers (simon@myeclecticimages.com)

As Vic the Chili Man continued to grow in popularity, new opportunities came his way. He and his hotdog cart have already appeared in two movies – Bad Grandpa, and Max. as well as a Super Bowl commercial. Vic was also featured in a book, “Extraordinary Jobs Done Extraordinarily”.

At the time of our visit, Vic was considering having chili Man T-shirts made up, but I suggested bibs. Not only would they keep his customers – especially the business professionals – from wearing his ingredients, but they would definitely be unique.

One of the most important lessons in business came from a former employer. He told Vic, “There’s always room in the market for a superior product.” Vic took it to heart, and puts it into practice every day his cart is open for business.

When Vic started his business, his mission was that, “ten years after I serve my last hotdog, people are still talking about it. There’s never been a day in my life where I’ve gotten up and said, ”today, I’m going to be sooooo mediocre’. It’s either go big, or go home.”

Vic claims to own only one long-sleeved shirt, but that’s not the only reason you won’t see his cart between November and mid-March.

Disney World for some well-deserved R&R is usually first on the agenda. Then Vic gets serious. “I focus solely on my charity,” he explains. “It’s called SHRED (Skaters Helping Realize Extraordinary Dreams).” SHRED raises funds in support of families with children who face major medical challenges.

The main fundraising event is a skateboard art show and auction. Featuring hand-painted items such as skateboards, pizza peels, ceramic skulls and more to provide assistance to three families.

It all began in 2013, when Vic organized the first annual fundraising event for his neighbor, Gabe Ospina, a 5-year-old with spina bifida. Two families were added in subsequent years. There’s a lot of hard work in raising these funds, but for Vic, it’s giving back for the fabulous life he has.

So, what did Simon and I choose? Simon had the Fritos Pie, and I had the Life Changer. Neither of us are hotdog lovers, but we became immediate Chili Man converts after one bite. Vic’s dogs are a magic combination of love, creativity and a good kind of insanity, just like their creator.

Have you found a new take on a not-so favorite food that has made you a convert? If so, we’d love to hear about it in the comments.

For more information on Vic the Chili Man, his menu and anything else you might want to know about the man and his dogs, check out his Facebook Page.