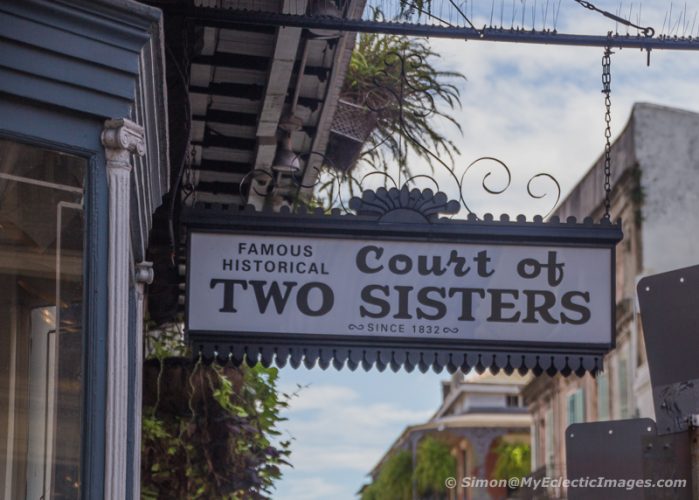 New Orleans (NOLA) is famous for its deep roots in jazz and outstanding food. On a recent trip to the Big Easy, Simon, Otto and I immersed ourselves in both via a jazz brunch at Court of Two Sisters.

The terrace, one of Court of Two Sisters’ four dining rooms, proved to be the perfect setting for our indulgence. The Long narrow room was bright and airy courtesy of one entire wall of tall windows, and white paneling and mirrors along the opposite wall. Skylights and white globes with ceiling fans added to the sense of openness.

The Terrace Dining Room at Court of Two Sisters (©simon@myeclecticimages.com)

The Food at Court of Two Sisters

An average Court of Two Sisters jazz brunch serves as many as 1,200 hungry music-loving guests during a six hour period on busy days. And small wonder. Everything is prepared fresh daily.

We began our dining adventure with a bowl of Court of Two Sisters’ famous turtle soup. The broth was dark, and generously laced with sherry. The soup had a bit of a kick, which complimented its slightly fishy flavor. Never having tried turtle soup before, I can’t tell you if this one lived up to the expectations of a reptile connoisseur. All I can say is that mine tasted delicious without filling me up so much I wouldn’t have had room to sample an assortment from the sumptuous buffet.

It was a challenge deciding which of the variety of tempting hot and cold offerings to load onto our plates without taking more than we could manage to eat. Chilled salmon with tomato coulis and sunflower seeds, crawfish salad and shrimp with remoulade sauce for dipping claimed most of the real estate on my plate. Mushrooms, and broccoli salad rounded out my main course. In addition to the same items on my plate, Simon had a generous scoop of andouille and chicken jambalaya. All the items we sampled were tasty, but the salmon and the kicked up remoulade sauce were over-the-top. Simon’s jambalaya had excellent flavor, but the meat was a little on the dry side.

A Plate of Delectable Food at Court of Two Sisters (©simon@myeclecticimages.com)

The buffet showcased a luscious looking salad bar with fresh vegetables and prepared salads. Unexpected dishes, such as curried chicken, could be found on the hot bar along with the traditional NOLA fair.

Hard as it was, we managed to save room for dessert. Simon found his bread pudding moist and creamy. My king cake had a strong cinnamon flavor, which provided a refreshing counterpoint to the sweet green, gold and purple icing.

We also had tiny amounts of moist and crunchy pecan pie, as well as bananas Foster, which did not disappoint.. In order to assuage our guilt, we ended the meal with some sweet, juicy fresh strawberries. Perhaps we could also have counted the bananas Foster as fruit?

The service was friendly, efficient, yet discreet. Empty plates were whisked away and tea and water refilled quickly and quietly.

As we took our time enjoying brunch, The music injected an upbeat element into the already pleasant atmosphere. The jazz trio entertaining the diners was audible, but you could still carry on a conversation.

Instrumental and vocal renditions of old standards like “Paper Moon” and “It Had to Be You” kept me smiling and doing my best not to ruin the mood by singing along.

The property where Court of Two Sisters now stands became the home of its original resident, Sieur Etienne de Perier, second French royal governor of colonial Louisiana, in 1726. The structure we see today was built in 1832 during NOLA”s first major economic boom.

The now famous building became a notions store called the Shop of the Two Sisters in 1886., From this location, Bertha Angaud, and Emma Camors, sisters born two years apart into an aristocratic creole family provided the city’s finest women with Mardi Gras costumes, formalwear, fine lace and imported perfumes. To keep their customers occupied while they waited for alterations to be completed, the sisters occasionally served tea and cakes in the large courtyard.

Part of the Courtyard at Court of Two Sisters (©simon@myeclecticimages.com)

In 1904, Bertha’s husband passed away, and shortly thereafter, the sisters closed the shop in the wake of dramatic changes in the demographics of the French Quarter. Ownership of the once elegant shop changed hand seven times over the following 30 years. It experienced several incarnations: a small bistro, a refreshment stand, and, during Prohibition, a speakeasy.

In 1963, an established NOLA restaurateur, Joe Fein, Jr., purchased the building, and immediately made the commitment to preserve the structure’s historical integrity. Today, the third generation of the Fein family continues to provide NOLA residents and visitors with excellent food, good music and a charming historic venue in which to enjoy them both.

Before waddling out of Court of Two Sisters, we had the opportunity to chat with Troy Picard, one of the restaurant’s managers. He began bussing in 1993, and worked his way up through the ranks to his current management position.

Troy explained that the restaurant’s entrance had once been used as a carriageway for the sisters’ customers. Since the property spans an entire city block, it was easy to imagine fine ladies alighting from their horse-drawn carriages to while away the afternoon spending their husbands’ money.

The Menu at Court of Two Sisters (©simon@myeclecticimages.com)

I had to ask about what effect Hurricane Katrina had on Court of Two Sisters. Troy explained that the building only sustained minimal wind damage, but the owners had to replace the coolers and freezers due to the lengthy power outage.

Troy and his family evacuated to Texas, and admits to having been in a somber mood when he returned in February, 2006. But something magical happened. “Tourists from all over the world came to help in the rebirth of New Orleans,” Troy recalled. Mardi Gras 2006 was the largest this NOLA native had ever seen. “This 12 block area is the Heartbeat of New Orleans,” Troy said, his passion for the French Quarter surfacing. “New Orleans is the heartbeat of the state. If we’d lost the French Quarter, we’d have lost the whole state.”