“C” is for Cremona 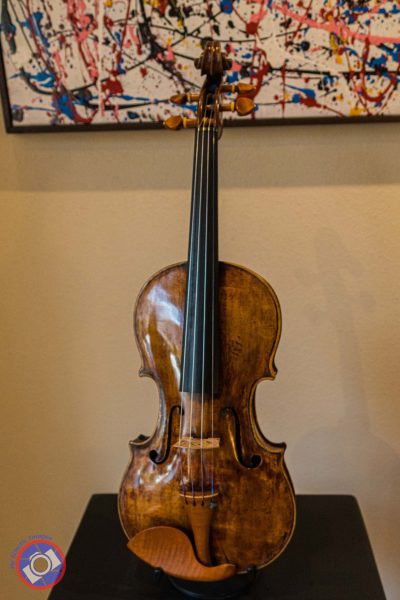 Discover One of Italy’s Lesser-Known Treasures Without the Crushing Crowds.

(The next installment in the series, “The ABCs of Future Travel”, designed to inspire you to start planning your next trip.)

Cremona, located in Italy’s Lombardi region, wasn’t on our radar until it was. Somewhere between our enchanting stay in Emelia-Romagna and the anticipation of a few days in Cinque Terre, we suddenly realized we could learn how violins were crafted in the hometown of Antonio Stradivari himself. This legendary luthier produced 1,000 violins during his lifetime and helped put Cremona on the map as a center for the production of superior stringed instruments. It took one phone call to Amorim Fine Violins of Cremona, and the next day we were standing in the entrance of the home of some of the world’s most magnificent and valuable violins, violas, and cellos.

Music from the Heart and Hands

Our visit to Amorim Fine Violins Cremona will always stand out as a highlight among many in Italy. Within the walls of the building housing the showroom and workshop, I held a violin and a viola for the first time. Exploring the shapes, contours, and fine details of these instruments with my fingertips, and feeling the satiny finish was a joy. I also discovered how truly large a cello is when you get up close and personal with it.

Luan Amorim, co-founder, and COO of the company, graciously showed us around. In the showroom, he held us spellbound with the fascinating facts behind some of the fine pieces on display. Some were copies of famous instruments crafted by his luthier father, Luiz, brother, Gaian,  and a Bulgarian-born employee. Others were exquisitely restored original treasures. But the most fascinating part of our tour was the workshop.

When we entered the Amorim Workshop, it came as somewhat of a surprise to see how small it was. Along with Luiz were two other violin makers and company co-founder, Betina Schreiner, the latter engrossed in the painstaking details involved in restoring a valuable violin.

While classical music played in the background, the violin makers focused on their work. Luan explained the materials, tools, and processes that go into each stringed treasure created or restored at Amorim. I held molds, planes, and other items used in the production of some of the finest instruments available to musicians, collectors, and investors worldwide. I also explored a Stradivari copy in progress. 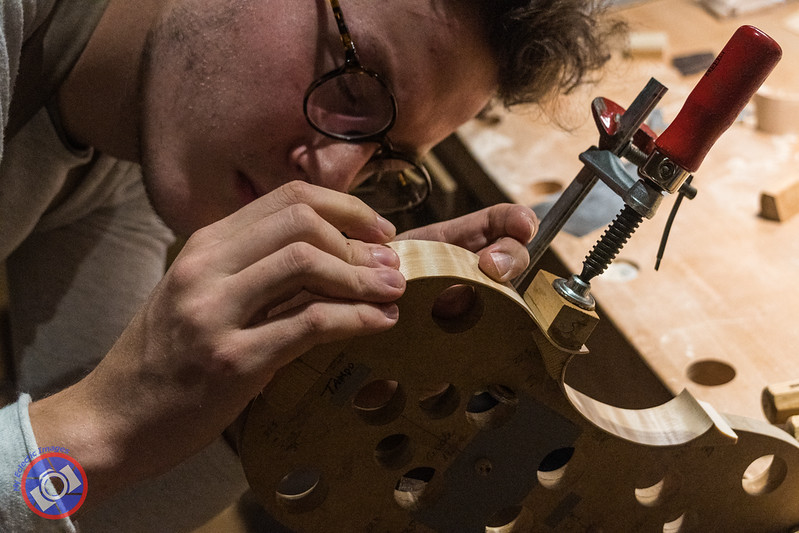 Gaian Amorim building the Sides of a New Violin (©simon@myeclecticimages.com) 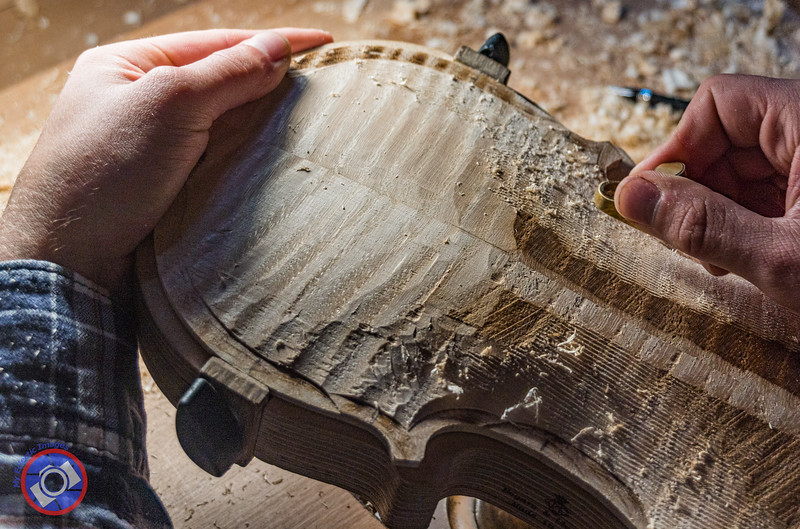 The Fine Workmanship that is Needed to Create a Violin (©simon@myeclecticimages.com)

Each instrument is unique and bears the Amorim stamp in its interior. Luan explained that it takes approximately 220 hours to complete one violin, which translates into two per month. 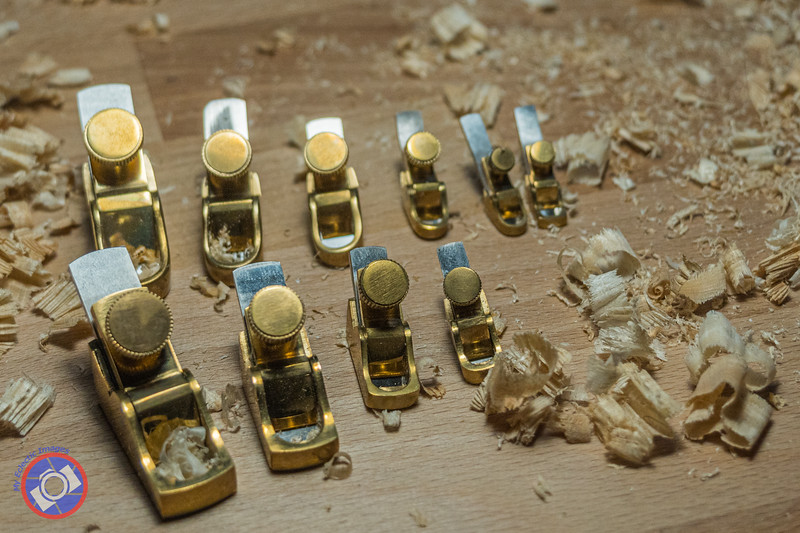 A Set of Wood Planes Ranging in Size from Less Than an Inch Long to About 3 Inches Long and Used in the Creation of an Amorim Fine Violin (©simon@myeclecticimages.com) 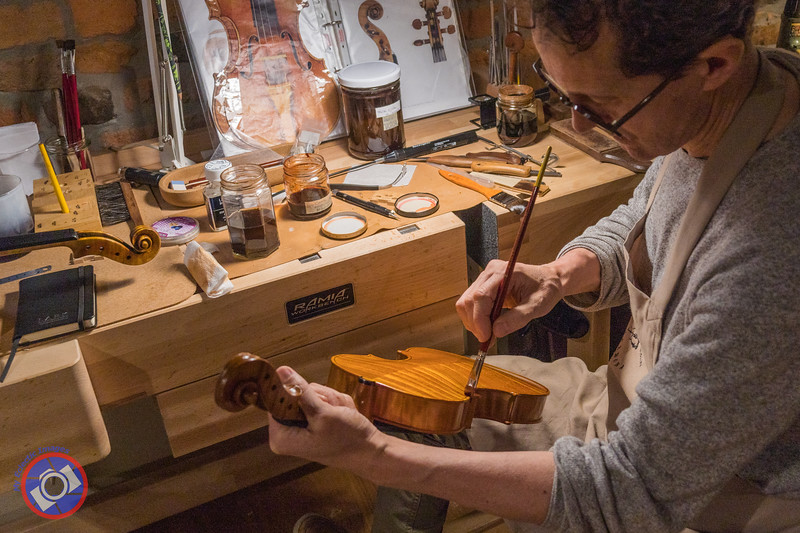 Luiz Amorim Applying the Finishing Touches to One of the Masterpieces Built by Amorim Fine Violins (©simon@myeclecticimages.com)

From the workshop, Luan led us downstairs where we were greeted by more instruments, paintings by Luiz – violin making is obviously not his only talent – and bottles of wine, “for the end of the day.” Well, we were after all in Italy.

It was in that brick-lined cellar we were treated to the young Bulgarian – whose name I can’t find anywhere in my notes – demonstrating the music made by a copy of a violin made by Matteo Goffriller in Venice, in 1720 and then the original. We agreed the copy made in the Amorim workshop had a slightly richer depth of sound

Luiz Amorim founded his company in Curitiba, Brazil in 2001. In 2018, the family set up shop in Cremona to continue following their passion for making fine instruments in Cremona, where the heart of the craft beats pure and strong.

If you are in the market for a truly magnificent instrument, Amorim is the place to go to in Cremona. Visits are by appointment only, and instruments start at €10,000. But if you are a serious musician or collector, the quality and workmanship will be worth every cent.

What to See in Cremona

After saying goodbye to the Amorim family, we had little time left to look around. We would have gladly extended our stay for a thorough exploration of the Museo del Violino, but it was Monday, and like most museums and churches in Italy it was closed. The good news is we have many reasons – aside from reconnecting with the amazing Amorim family – to return to Cremona. Here are just a few: 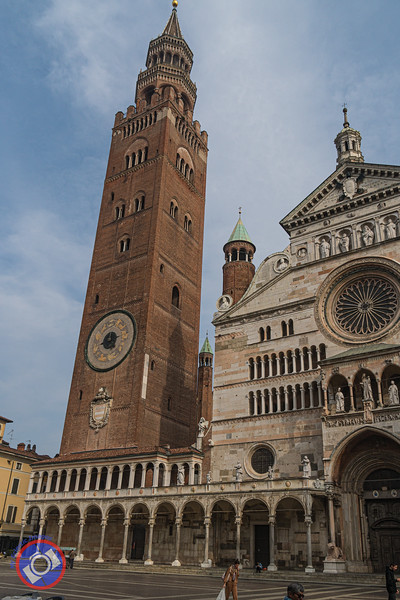 The Brick Bell Tower Adjacent to the Cathedral in Cremona (©simon@myeclecticimages.com)

Sculpture in the Entrance Way to the Museo del Violinois (Violin Museum) in Cremona (©simon@myeclecticimages.com)

In Cremona’s Piazza del Comune, where 12 streets converge, you will find the cathedral, baptistry, the Torrazzo, and the over 250-year-old Teatro Ponchielli. This theater, with one of the largest stages in Italy, is a venue where Mozart once performed. And that’s just the main piazza. You will find more piazzas, some with active markets, and one with a statue of – who else – Antonio Stradivari.

In 2012, Unesco decreed that traditional violin craftsmanship in Cremona deserved protection on its list of Intangible Cultural Heritage of Humanity. I’m not sure exactly what this designation entails for the people of Cremona. All I know is I’ve fallen in love with the town and its people. As soon as reasonably possible, I’ll be back.