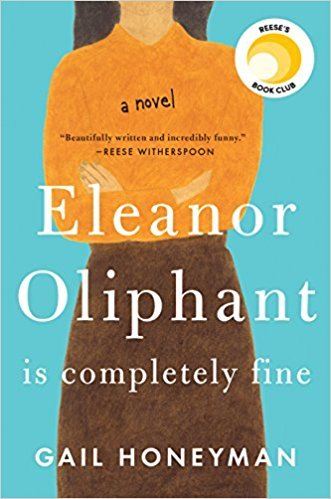 This Unlikely Heroine Will Steal Your Heart

Simon, Otto and I were in Spain – I don’t remember exactly where – when Elizabeth, my sister-in-law, emailed me with a suggestion to read “ Eleanor Oliphant Is Completely Fine”. Since her book club would be meeting during our pending visit to York, she thought I would enjoy reading the book and joining her and her friends. This seemed like a grand idea, so I downloaded it to my phone and read the first couple of chapters.

Fast forward a week, and we’re sitting at a clinic in Girona waiting to see if I had badly sprained my ankle or broken my leg earlier that day. We eventually learned that it was the latter, but during our three-hour wait, I became totally immersed in Eleanor’s bizarre and fascinating life.

“Eleanor Oliphant Is Completely Fine” is a tale of a 30-year-old Glasgow office worker with no ambitions, social skills or desire to participate in the world around her. Her scars, external and internal, shape her day-to-day existence.

Our heroine is a creature of habit and routine. She goes to work in black slacks, a white shirt and black velcro shoes. She interacts as little as possible with her coworkers, and after picking up her Friday night pizza and supply of vodka doesn’t emerge from her apartment until Monday morning when her week begins anew.

Every Wednesday evening, her rigid routine includes a phone call from Mummy. Apparently, Eleanor’s “Mummy” is either in prison or in a mental health institution. We’re never sure until the very end. During these calls, Mummy berates and belittles her daughter regarding every aspect of her life.

In an attempt to gain Mummy’s approval, Eleanor becomes fixated on a local musician and builds a fantasy around him  where they fall in love and marry. But first, they have to meet.

Realizing she must learn how to dress and act in a way that would make her attractive to the object of her pursuit, Eleanor’s petals slowly begin to unfold. From a tightly closed rosebud living in the dark, the reader follows Eleanor’s emergence into the light. Her growing pains are both poignant, and hilarious.

Eleanor tells her story with humor, wonder and trepidation. Her discoveries were my discoveries, and her triumphs, large and small, kept me cheering her on.

At the same time Eleanor is fueling her fantasy, she reluctantly allows herself to be drawn into the world of Raymond, the company’s computer geek. He is kind-hearted, warm and supportive. Everything Eleanor has lacked throughout her entire life. Coming to the aid of a stranger brings them closer, and Eleanor expands her social environment. Everywhere she turns, she finds people unwittingly ready to help Eleanor transform herself for the night when she plans to meet her love.

As Eleanor gradually modifies her appearance and outlook, more and more people are drawn to her. She receives a promotion, and the coworkers who used to poke fun at her begin to interact with Eleanor in a more positive way.

A Rose in Bloom

The fateful evening for which Eleanor longs doesn’t quite work out according to her plan, but as a result, the doors to her cloudy past and the promise of a brighter future fling open. In the process of readying herself for a night that enms in disaster, Eleanor becomes stronger, wiser, kinder and prepared to face down her demons.

This debut novel by Judy Honeyman is hard to put down, and I didn’t. Unable to sleep because of the pain in my leg and the inability to find a comfortable position, I finished the book in the wee hours of the morning.

Full of surprises, wit, and pain, “Eleanor Oliphant Is Completely Fine” is an engaging,  disturbing journey into the crippling power of childhood trauma, loneliness and depression. It is also a beacon of hope, because if Eleanor can free herself from that power and blossom in spite of her past, others can, too.

Note: I read the audiobook narrated by Cathleen McCarron. She did a phenomenal job capturing Eleanor’s personality, as well as altering her voice to differentiate between the characters. If you truly want to climb into Eleanor’s world, this is the way to go.