Sometimes I think we’ve lost our minds. No, I’m not talking about the recent election campaign and subsequent results. That took insanity to an entirely new level. What I’m talking about is us, Simon and me. We’re a stable couple in our mid-sixties, living in a lovely waterfront house in a quiet community. But by the time you read this, we will have embarked upon nearly five consecutive months of travel, and won’t be sleeping in our own bed again until the third week in May.

Meanwhile, since January of this year, we’ve visited seven countries and several states, and that was just the traveling. My mother turned 99, Kevin, our eldest bought his first house and our niece, Emily got married. When we were at home, we volunteered, and hung out with our friends. Simon was active in his Rotary Club, worked on household projects and did photography related things. I was active on the board of a local women’s networking group, crocheted lap robes for the hospital auxiliary, and doubled the amount of writing I did the previous year.

Otto was with us every step of the way, and distinguished himself as both an amazing guide and mischief magnet. He helped me navigate the tricky terrain of Pompeii, and climb to the top of the Greek amphitheater in Taormina. He stood quietly by my side on the sands of Omaha Beach, and joined us in getting soaked to the skin at Stone Henge. We may be crazy, but Otto is as solid as they come.

Have I forgotten something? Probably. The point is the 40-hours plus working part of our lives seems like a slow train in comparison to the high-speed version called retirement we boarded nearly four years ago. There are reasons, and if you haven’t already written us off as raving lunatics, I’ll explain.

Currently, we have our health. Because we’re sensible with money, we can afford our lifestyle. That should be enough, but there’s much, much more.

Over the last few years, we have seen friends and family members die unexpectedly, and far too young. We also know people who say they would love to do what we’re doing, but, for some reason, can’t. I’m not judging them. My concern is that they will end up regretting not following their dreams and passions at least to some degree. It’s not the one who dies with the most toys who wins. It’s the one who dies with the fewest regrets. 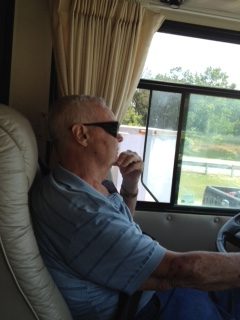 Floyd at the wheel (courtesy of Joan)

We are fortunate to have had role models showing us the way to avoid those regrets. Our long-time Atlanta friends, Joan and Floyd, retired, bought three consecutive RVs and spent several months a year on the road. They became actively involved in an RV community, as well as keeping busy when they were at home. Floyd lost his battle with cancer three years ago. Although we miss him terribly – no one more than Joan – They spent 20 years enjoying the fruits of all their hard work by living life to the fullest.

“We met some of the most wonderful people we are still friends with today,” Joan told me in her email accompanying the photos. “Two of our dogs went with us and also had their own motorhome buddies whenever we met up with friends who also had dogs. It was a lifestyle we felt so lucky to be able to do.” Bringing home her point, Joan concluded by asking me to, “Encourage your readers to go while they can.” So, that’s what I’m doing.

Another inspiration was our Panama friend, Ralph. He was a Danish born expat from the U.S., living in Boquete. We met him during our first visit to Panama in 2014. When we said good-bye to Ralph last year, it never occurred to us that we wouldn’t see him again. Ralph died this spring due to complications following a car accident. 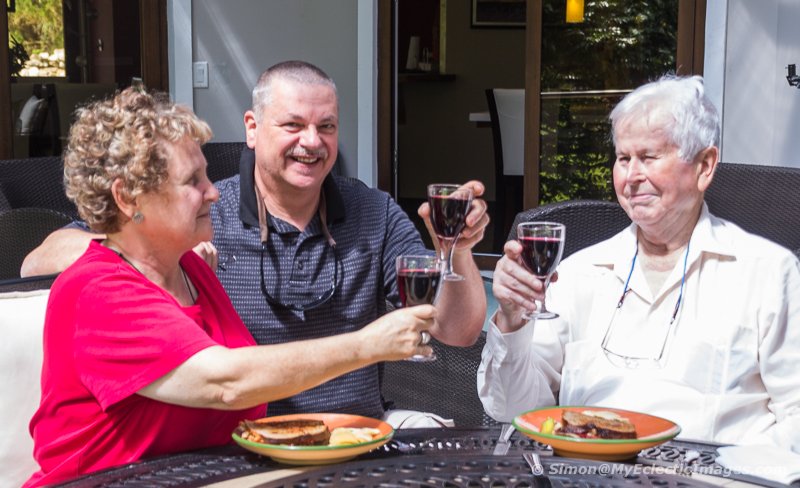 Enjoying a glass of wine with Ralph

Ralph’s story is long, complicated and – in recent years – tragic. His wife of fifty years, Carmen, was lost in the darkest depths of Alzheimer’s, and Ralph told us that this was his one regret. He lived in a tiny apartment, drove an old car and was one of the most content and joy-filled people we had ever met. He volunteered for projects that benefitted the poorest area residents, loved birds, good food and wine and made a friend of almost everyone he met. Ralph’s last project was the construction of a butterfly house, which is now complete. It bears his name, and we will visit it shortly after we arrive back in Panama to pay tribute to our dear friend.

“Look for the surprises.” I’ve said this time and time again on this blog, and I’m not done. Our flexibility in dealing with the occasional travel lemon, and our openness to embracing new people and situations have enabled us to make 2016 our best travel year ever.

While volunteering in the green room at the Boquete Jazz and Blues Festival in February, Simon noticed a couple wearing Rotary pins. Their names were Marc and Jacquie, friends of harmonica great, Lee Oscar from way back. Lee’s request to let them spend some time with him in the green room before his performance was granted, and seeing the pins, Simon couldn’t help starting up a conversation.

The four of us clicked, and in March, we visited them for a couple of days in Coronado Beach.

When we returned to Boquete, we had a wheelchair in our car. The chair was one of several left over from a Coronado Rotary Club project in which Marc and Jacquie had been heavily involved. Our chance meeting with this delightful couple ended with new friends in our lives, and a young boy in Boquete receiving a life-changing piece of equipment.

Over the last three years, Simon, Otto and I have volunteered as English language facilitators for Diverbo in Spain and Germany. Diverbo is a language immersion program geared primarily to professionals requiring a working command of English. The Diverbo staff and volunteers spend a week working on helping the students improve their skills. Everyone in every session has been a joy to know, But some stand out.

This year, during our Diverbo session at La Alberca in Spain, we met Nitya, a charming and fascinating volunteer from India. Considering most of our fellow volunteers have been British, Canadian and American, Nitya added a new and welcome ingredient to the international stew.

India has always fascinated me from historical, cultural and geographical perspectives, and Nitya was a wealth of information and insight. When we parted company, she invited us to visit her in Bangalour. We couldn’t do it this year, but a visit to India has become even more desirable for the future.

We met Jane and Duncan in Stockholm at TBEX Europe, an international travel bloggers conference. To be exact, we actually met this Australian couple during a pre-conference overnight fam (familiarization) trip to several of the islands in the Stockholm Archipelago. 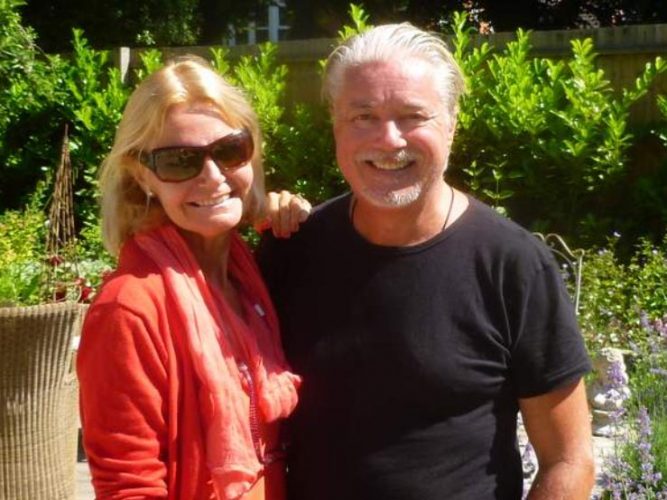 Jane and Duncan – the ToTravelToo Team (photograph provided by Jane)

If you think we’re crazy, these two have spent the last three years traveling the world as house sitters. They are personable, practical and smart, which is part of why their chosen passion works so well for them.

Jane and Duncan have been housesitting in Panama for the last few weeks, and are a few short miles away from where we’re staying in Boquete. We arrived today, and getting together with them is at the top of our list.

She was on the prowl. And why not? Fah was a producer and host of The Passion Thailand, a popular magazine-style program on Thai TV. Her mission at TBEX in Stockholm was to find new stories. She had a local videographer with her, and when she cast her net, Simon, Otto and I found ourselves ensnared in it. 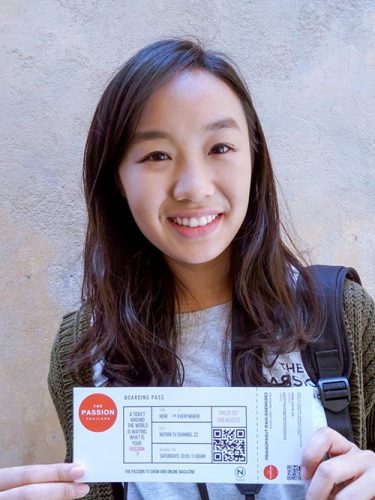 Fah from The Passion Thailand (photograph courtesy of Fah)

During an hour of downtime at the conference, Fah interviewed us on our travels with Otto, and why we, at our time of life, have chosen to take to the skies and roads to discover, learn and savor. 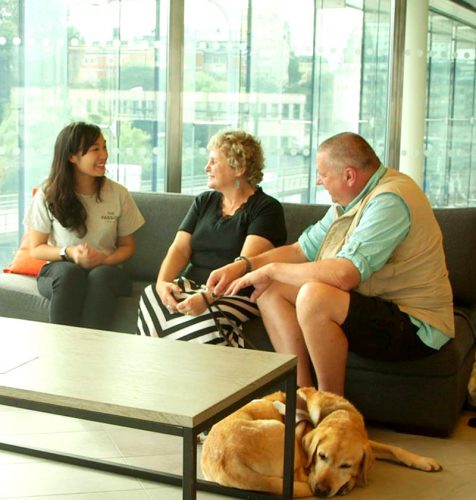 Fah interviewing us in Stockholm (photograph provided by Fah)

Fah sent us the link when the show was aired, and she had done an excellent job interviewing and editing. If you decide to check it out, don’t miss the rest of the program. It’s definitely worth the time.

During what turned out to be our last year in Atlanta, we were one of three Rotary host families for a student from Sweden. Her name was Sara, and while she was with us, our lives were enriched by her presence. This was not only an opportunity for Sara to attend college for a year in Atlanta, it was a tremendous learning experience for us.

As soon as we knew we would be in Sweden for TBEX, we contacted Sara via Skype, and arranged to meet her after the conference. 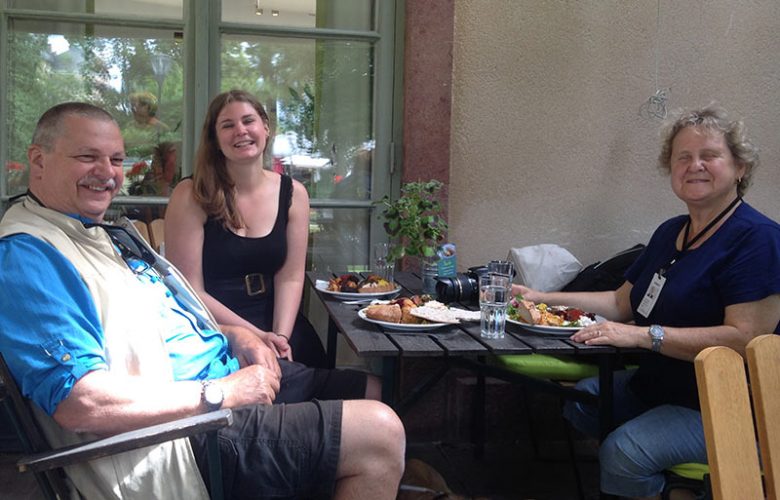 One of my fondest memories of Ralph was the sincerity in his voice when he would tell us how thankful he was for the privilege of living the life he had. And this is what we are all about in our so-called retirement. We want to live like Floyd and Ralph, and all the people we’ve know who embrace life and live it to the fullest. We plan to be among the winners when we die. Until then, we will travel, volunteer, love our children, family and friends, welcome new friends into our lives and do our best to make vodka lemonade out of every lemon life hands us.

Wishing all of you a happy and prosperous New Year. May 2017 be your best year ever!

What rings your chimes, and makes your little heart go pitter-patter? And what are you doing to make that passion a reality? Let us know in the comments.