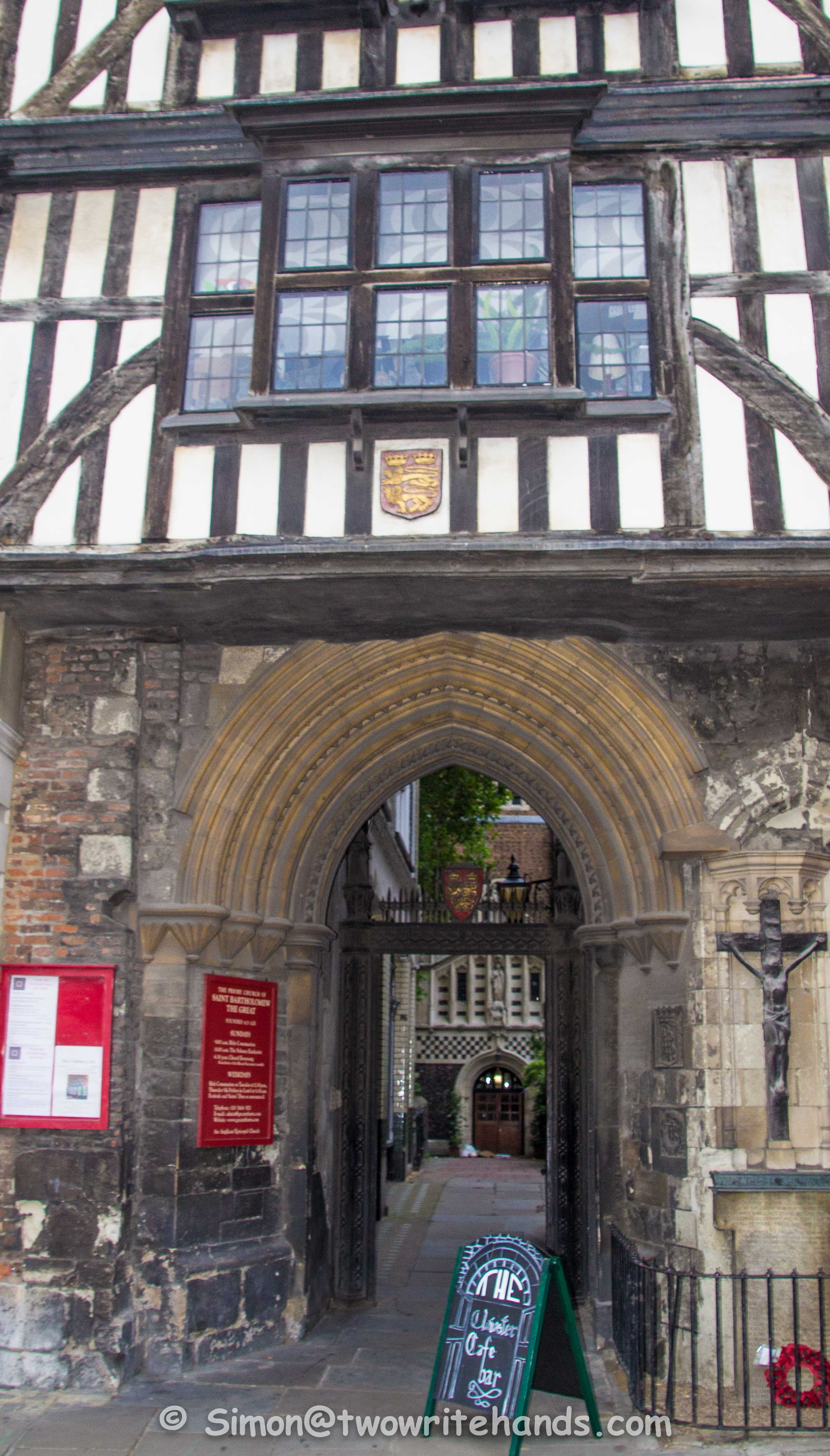 If you Like Your History with a Hefty Dose of Goosebumps, the Criminal London Night Walking Tour Will Fit You Like a Shroud

Standing at the site where Scottish hero, William Wallace was executed was enough to give me a chill in and of itself, but when Robert, our well-informed and articulate City Wonders Tours guide described, in vivid detail the utter brutality with which this great man was dispatched, I found myself immersed in feelings of both deep pity and overpowering revulsion. Welcome to one of London’s most unique and emotionally challenging walking tours.

Criminal London Night Walking Tour turned out to be somewhat of a misnomer for this two-hour  sojourn into the past, but in a good way. Not only did we learn about some of London’s most famous crimes – think Jack the Ripper, but we were also regaled with stories of ghosts, gruesome historical events and ghastly living conditions.

Since a rainy evening would seem most appropriate for our tour, the weather bloke cooperated by sending us cloudy skies and intermittent showers. Robert, ever the gentleman, took pity on his soggy charges, bringing us into the smallest constabulary in London. This is a fully functioning police station. It is also the home of a tiny, but attention-grabbing museum, where we were introduced to a morbid collection of artifacts spanning over two centuries of crime and investigation.

Some of the glass cases contained various implements of destruction, such as a walking stick with a knife blade concealed in the handle, which was used in an attack on a police officer. There was also  a 1913 “Suffragette bomb”, made from a mustard can, which was designed not to harm, but  to bring attention to the cause. Lets hear it for the girls!

A crushed helmet worn by an officer injured in the 1973 IRA bombing at the Old Bailey, was a sobering reminder of bombs that were intended to harm. Fortunately, this particular officer did survive his injuries.

Among these and other glimpses into the past was a series of crude forensic photos of Jack the Ripper’s handiwork. Repelling, yet at the same time riveting, these depicted the brutality with which this man – or as some believe, woman – murdered five women during a six-week period in the summer of 1888, clamping the Whitechapel neighborhood in a vice-like grip of terror.

Although it is believed that the women died quickly from a first cut to the throat, they were immediately relieved of some or all of their internal organs. The Ripper even made a cruel gift of one victim’s kidney to the London Police.

Particularly disturbing was a photo showing the remains of Jack the Ripper’s last victim, Mary Kelly. Because hers was the only murder committed in a house, It is believed that her killer had more time to remove all of her organs, including the womb.

Theories abound, but the mystery of Jack the Ripper remains unsolved. Whitechapel, the neighborhood where poverty and prostitution defined its character in the latter part of the 19th century, is now a trendy area with shops, restaurants and the headquarters for counter-culture publications. 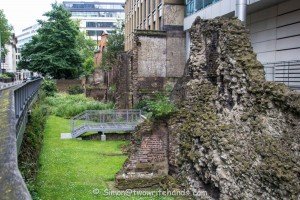 The City Of London covers a one square mile area within the boundaries of the ancient Roman walls, and is policed by 800 officers, many of whom specialize in white collar crimes. Metro London, on the other hand, encompasses a much larger area, with 3,100 officers. The two forces are completely independent of each other, but have a good working relationship. Metro London calls on the expertise of the London Police for assistance in solving white collar crimes, while London can make use of the Metro Police helicopters when needed.

We stood at the site of Newgate, England’s most notorious prison, while Robert told of bribery, corruption and a man who walked, the halls of death row, ringing his bell and taunting the condemned the night before their execution.

Built into the Roman walls in 1188, and Demolished in 1902, Newgate Prison was the starting point of many a hanging parade. According to the tradition of the day, the condemned man was put in a wagon, perched on his own coffin and driven, through streets lined with jeering on-lookers, to Marble Arch, site of the old gallows. This practice was encouraged by the government, until it was stopped in 1783, due to gentrification of the area. 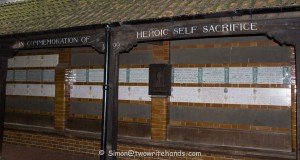 Postman’s Park brought us some short-lived relief from all the murder and mayhem. Opened in 1880, it is the home of George Frederic Watts’s Memorial to Heroic Self Sacrifice, a long wall housing 200 ceramic tiles commemorating heroic acts of ordinary people who died while saving others.

One such hero was Alfred Smith, a London Police Officer, who in 1917 rescued 150 women from a factory set ablaze by a Zeppelin raid, in which he lost his own life.

A free mobile app, “The Everyday Heroes of Postman’s Park”, is available for those who want to learn more about the brave and selfless individuals commemorated on the memorial. 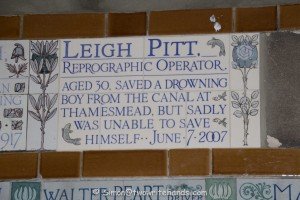 Following our brief moments of reflection on the brave and generous self-sacrificing spirit of mankind, we were unceremoniously jolted back to reality by our dedicated tour guide.

Now, if I tell you everything we saw on our tour, it will spoil the fun when you take it. And I do recommend you take it. So here are just a few more tantalizing tidbits to whet your appetite:

And so ended our venture into London’s darkest memories. Rest assured that, if you follow in our footsteps, the experience will haunt you for years to come.