A Book Review: Girl with a Pearl Earring, by Tracy Chevalier 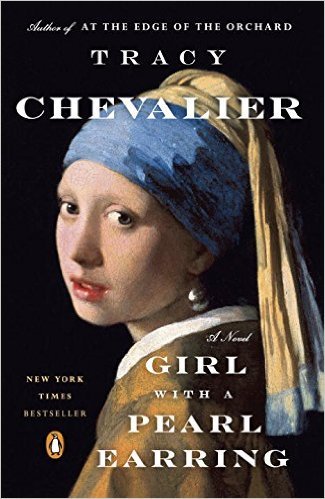 What Happens When Mystery Spawns Creativity 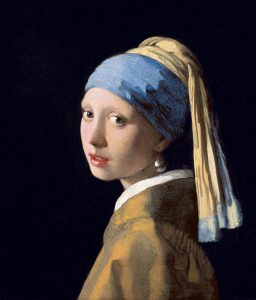 Painting of Girl with a Pearl Earring (photographer unknown)

“Girl with a Pearl Earring”, was both a book club and road read in 2006. We were driving back and forth between our home in Atlanta and New Bern, getting what was supposed to be our new life in order. And because my heart wasn’t at all in this move, I identified deeply with the plight of the heroine as the story opened.

This novel is fiction to the core. It is built around the identity of the face in the Dutch painter, Johannes Vermeer’s masterpiece, Girl with a Pearl Earring.

Who was the model for Girl with a Pearl Earring? The question has been a mystery to this day. Some believe her to have been Vermeer’s eldest daughter, Maria. Others surmise she was a mistress. And so it goes. Still others believe the work to have been a tronie, a painting of a head that was not a portrait of anyone specific.

Griet is a 16-year-old Dutch girl – no, I didn’t identify with that part – from a poor, but proud and loving Protestant family in Delft. Her father, a tile maker, had been blinded in a work-related accident. There was no workmen’s comp back in the mid-17th century, her brother had gone off to sea, and Griet’ is left to support her family.

She is hired as a maid for the Vermeer family. When Johannes and his wife, Catharina, come to Griet’s home to check her out, Johannes notices the way she had cut the vegetables for the family’s dinner. They were in separate piles, and the pieces were of a uniform size.

Griet must present herself at the Vermeer home the following day. But the young girl has several problems with this arrangement, not the least of which is that the family for whom she will be working is Catholic. On her way to her new life, she stops in the town square and turns in a slow circle, contemplating her options. Go to the Vermeer house? Try to find her brother? Run home? Run away altogether? In fact, like most women living in Griet’s time and place, she had no viable options at all.

Griet’s life with the Vermeer family is complicated by the volatile and jealous Catharina, who is barred from entering her husband’s studio. Making matters worse is their daughter, Cornelia, who is cunning and spiteful. Both women paint an imaginary bull’s eye on Griet’s forehead, and the result is a rough couple of years for the young maid.

The story of “Girl with a Pearl Earring” is told by Griet herself. The reader sees only her perspective, and must guess the motives and feelings of the other characters. What Cornelia, the brat and Catharina, the bitch have on their minds is obvious. But what about Johannes, who enlists Griet’s help in mixing paints, orders that she be the only servant allowed to clean his studio, invites her to look through a camera obscura and persuades her to sit for the now-famous portrait. All this behind Catharina’s back.

Johannes’s mother-in-law, Maria Thins, is an accomplice, when she ‘borrows’ her daughter’s pearl earrings in the hope her son-in-law will be paid well for the painting.

Griet is so loyal to her master, she pierces both her ears at his request, although only one will be visible in the portrait.

Meanwhile, Catharina keeps popping out babies – she gave Johannes 15 in all – and Cornelia keeps looking for ways to get rid of Griet. As for our heroine, she is not only having to deal with her complex feelings for Johannes, but the unwanted attentions of his wealthy and lecherous patron, van Ruijven, who commissioned the portrait.

As if this man trouble isn’t confusing enough for Griet, Peter, a butcher’s son, is smitten with her. He passionately courts the girl throughout the story. When Griet finally agrees to marry Peter, everything comes to a head.

And this is where we will leave Griet, Peter, Johannes, Catharina and the gang. I encourage you to read this beautifully written novel, and go back in time to a far different world. Perhaps you, too will find a moment in Griet’s story to which you can relate

Since Vermeer’s Girl with a Pearl Earring was the inanimate muse for Tracy Chevalier’s fertile imagination, it’s only fitting to take an objective look at the painting and the journey to its permanent home at Mauritshuis, The Hague

The 17.5 inch by 15 inch oil on canvas shows a young girl, her hair covered by a blue and gold oriental style turban. Her face is in half profile, and an unrealistically large pear-shaped pearl earring hangs from her visible ear. Doubts have recently been raised about the authenticity of the pearl, because of the specular reflection, as well as the shape and size of the earring. There is speculation the bauble is in fact nothing more than polished tin.

The focal point of the painting isn’t the earring – real or fake – but the face. You don’t know if she’s turning toward you, or away. Her lips are slightly parted, as if she is about to speak, and the wide eyes, mentioned in the novel as belonging to Griet, are arresting in their beauty.

In 1881, a Dutch national named Arnoldus Andries des Tombe, bought Girl with a Pearl Earring in The Hague at auction. For this masterpiece, because of it’s poor condition, he paid the equivalent of €24 in today’s currency. Since Des Tombe had no heirs, he elected to donate Girl with a Pearl Earring, as well as other paintings in his collection, to the Mauritshuis in 1902.

While the Mauritshuis began a major renovation and expansion program in 2012-2014, our girl took the kind of vacation Griet could never have imagined. She was exhibited in Tokyo, Atlanta, San Francisco, New York City and on her return trip home, in Bologna.

Girl with a Pearl Earring was rehung at the Mauritshuis in June, 2014. And according to museum authorities, there she will stay for the foreseeable future.

Although I have never been in the presence of Girl with a Pearl Earring, I feel a certain connection with the wide-eyed face in the painting. Of course, Griet is a work of fiction, But Chevalier’s character is so compelling, it’s difficult for me to separate her from the reality of the painting.

On the other hand, the 2003 film starring Scarlett Johansson and Colin Firth, left me cold. The ending had been changed. The last chapter of the book made more sense to me. If you choose to delve into both the novel and the film, I strongly suggest you read the book before downloading the video.

Have you ever felt a connection with a moment or character in a novel or short story? Let us know in the comments.