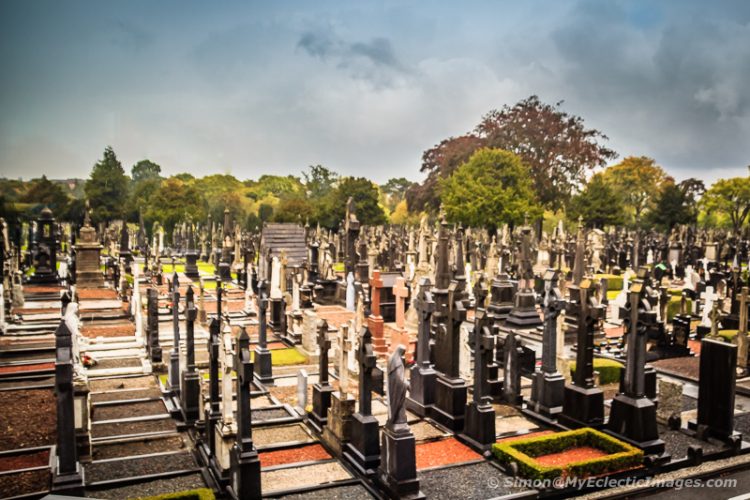 Who Says Dead Men and Women Tell No Tales

The rain came down in buckets. Then it didn’t. Then it did. It seemed the overcast skies over Dublin’s Glasnevin Cemetery Museum were determined to show us who was in charge. The weather may have been damp and ugly, but our spirits could not be dampened. We were in the company of Colin, a fellow Diverbo volunteer from earlier in the year, and member of Glasnevin’s Board of Directors. It was Colin who had set the wheels in motion for our unconventional history lesson on Ireland’s turbulent and triumphant past through the stones and stories of some of the cemetery’s famous and infamous residents. So, “dampness be damned,” was our response to the rain as we began our tour.

Glasnevin’s Sales Manager, Ann Kilcoyne had arranged our tour, and she braved the rain to accompanied our soon-to-be-soggy group. Our guide was Niall, who was more than qualified to do justice to Glasnevin’s story. He is a third generation Glasnevin guide, and his father and grandfather were both stone masons who carved many of the cemetery’s headstones. “One way or another,” Niall said with feigned resignation, “I was going to end up here.”

A Brief History of Glasnevin

When Henry VIII left the Catholic Church in order to marry Ann Boleyn, so did the rest of Britain of which Ireland was then a part. This ushered in centuries of repression and restrictions on Irish Catholics. To put it simply, they had no rights. They had no cemeteries in which to bury their dead, and Catholic priests were forced to conduct heavily abridged version of funeral services in Protestant graveyards.

The situation came to ahead in 1823, when a Protestant clergyman confronted a priest and reprimanded him for performing an abbreviated funeral mass. There was strong public outrage over the incident. A man named Daniel O’Connell, who would go down in Irish history as the champion of Catholic rights, wasted no time in taking action.

O’Connell proved there was no legal prohibition against saying prayers at a Catholic funeral. He then mounted a campaign to establish a cemetery for people of all religions and none.

Originally known as Prospect Cemetery, and consisting of nine acres of land,  Glasnevin was consecrated on February 21, 1832. The first burial took place the following day. His name was Michael Carey, and he was only 11 years old.

Niall pointed out a high wall with watch-towers. The structure had been erected to guard against bodysnatchers, who dug up fresh graves and sold the contents for medical research. This was a serious problem for many cemeteries during the 18th and early 19th centuries.

Today, Glasnevin lies on approximately 124 acres, and approximately 1.5 million people are buried there. According to Niall, “There are more people buried in the ground than alive in Dublin.” Glasnevin is the largest non-denominational cemetery in Ireland, and  Glasnevin Trust is Ireland’s largest provider of funeral services.

Daniel O’Connell is one of Ireland’s most revered heroes, but not for anything associated with Ireland’s independence. In fact his actions preceded the 1916 Easter Rebellion by nearly a century.

Born in 1775, O’Connell grew up to be one of Ireland’s most powerful politicians. He was a good man who championed civil rights and strongly decried the evils of slavery. He counted American abolitionist and reform activist, Frederick Douglass among his friends. But he is best loved in Ireland for bringing about the long-overdue emancipation of Ireland’s Catholic population.

Our cemetery tour began with a visit to the Daniel O’Connell Tower. Constructed in 1854, it honors the life and legacy of Daniel O’Connell. The tower stands 180 feet tall from the foundation to the apex of the three-ton cross reaching skyward.

It is the tallest round tower in Ireland, but size isn’t everything. The floors and walls are covered with Celtic symbols. And within these walls lies the tomb of Daniel O’Connell himself.

Walls in the Tomb of Daniel O’Connell (©simon@myeclecticimages.com)

O’Connell died in Genoa in 1847 on his way to Rome to be blessed by the Pope. His final utterance was, “My body to Ireland, my heart to Rome, my soul to heaven.” These words are inscribed on the walls of his crypt.

His body was returned to Ireland. His soul surely made it to heaven. As for his heart, it was removed and sent to Rome, but disappeared en route. Two out of three really isn’t bad.

At 3:00 am, on the morning of 1971 a 10 pound gelignite bomb rocked Glasnevin. It had been planted at the base of the tower.

The structure sustained serious damage, including the destruction of the original staircase. But the original door and O’Connell’s crypt remained intact. More importantly, the criminals who did the deed at least had the decency to detonate when no one was around to be killed or injured. Theories abound as to the identity of the perpetrators, but nothing was ever proved.

Forty-five years later, in 2016, restoration of the Daniel O’Connell Tower began with the rebuilding of the staircase. It was achieved using the original plans, in combination with traditional carpentry methods that were employed during the tower’s 19th century construction.

Unfortunately for us, the staircase wasn’t quite ready for show time when we visited Glasnevin. At the time of this writing, however, you will now be able to climb the 198 steps to the top of the tower. The upward journey will begin with a a wrought iron spiral staircase leading to a series of hand carved wooden steps. To make your climb more comfortable, six landings, featuring small exhibits offer you the opportunity to catch your breath.

At the top, you will be greeted with a breathtaking 360 panoramic view of the surrounding landscape. Of course, this view is at the whim of the weather, but on a clear day, you will see across the city of Dublin, Meath, Wicklow and the Irish Sea. If the skies are completely clear, you might even catch a tiny glimpse of Wales.

As for us, we plan to return on a finer day to take in the majesty of the view from the tower.

A Who’s Who in Granite and Marble

During our week at La Alberca, Spain, Colin described Glasnevin, saying that if we wanted to learn the history of Ireland, this was the ideal place to begin. And he was right.

Politicians, rebels, statesmen, suffragettes, musicians, literary greats and athletes share the serenity of Glasnevin with common folk whose roles in Ireland’s story were equally important. Here is a short list of some of the prominent residents of Glasnevin whose graves we visited.

The last grave we visited was that of Michael Collins, an Irish revolutionary leader, Ireland’s Minister for Finance, Director of Intelligence, and Director of Organization and Arms Procurement for the IRA. He was also President of the Irish Republican Brotherhood from 1920 until his death, and a member of the Irish delegation during the Anglo-Irish Treaty negotiations. And this is only a fraction of his resume.

By 1922, he was Chairman of both the Provisional Government and Commander-in-chief of the National Army. Ireland’s brightest star, Michael Collins, was assassinated in an ambush in August of the same year at the age of 31.

It should come as no surprise that the grave of Michael Collins is the most visited at Glasnevin. According to Nialls, hardly a day goes by without members of the public placing flowers on the grave.

Although James Joyce doesn’t reside at Glasnevin – he was buried in Zurich – his parents do. Also buried at Glasnevin are 150 of his characters. Joyce changed some of the names to protect the innocent – or perhaps the guilty – but he kept the names of several historical figures.

When we return to Glasnevin, we will hopefully have better weather for exploring more of the cemetery: the Monument to Ireland’s war dead and the National Botanic Gardens. I look forward to a leisurely stroll among the graves and noting the changing style of Irish gravestones over the last 200 years. Glasnevin has the largest collection of Celtic crosses in the world.

The Glasnevin Trust Museum, which opened in  2010 will be our sanctuary if the weather turns nasty. Aside from some fascinating exhibits, the museum has a café where we know we will be able to find a nice hot cup of tea.

Glasnevin was originally designed as a Victorian garden cemetery with an abundance of yew trees. This was only fitting as the trees are known for their resiliency, just like the people of Ireland themselves.

Located less than two miles from Dublin’s City Center on the Finglas Road, Dublin 11, Glasnevin Cemetery Museum can be accessed on foot through the original Prospect Square gate. The pathways at Glasnevin are smooth, and the museum and café are wheelchair accessible. The Daniel O’Connell Tower and the crypt could prove challenging for those with mobility impairments.

More information, hours and ticket prices can be found on the Glasnevin website.

The original “General History Tour” introduces you to the political figures, rebels, writers, musicians, statesmen and many others whose actions and contributions defined the history of Ireland. If your timing is right, you’re tour will include a realistic reenactment  of the fiery oration Patrick Pearse delivered at Jeremiah O’Donovan Rossa’s graveside on August 1, 1915. An actor in full period dress performs this now-famous speech each afternoon at 2.30pm.

Now, on your way out of the cemetery grounds, don’t forget to treat yourself to a pint at the aptly named Gravediggers Pub.

Disclaimer: We are grateful to Glasnevin Cemetery and Museum for hosting our tour. However, all opinions, as always, are entirely my own.