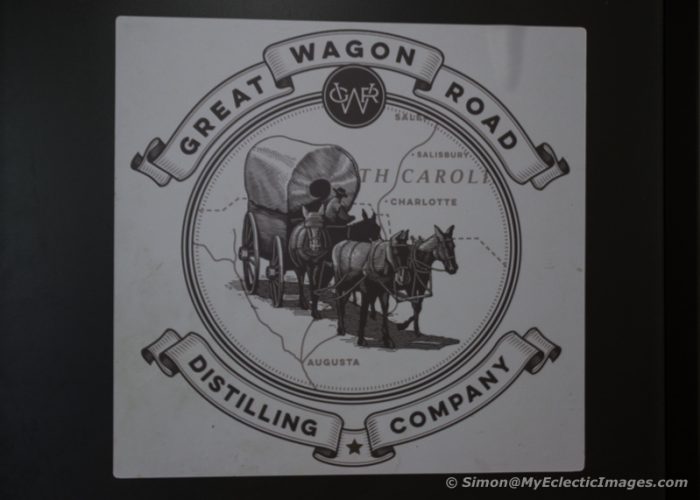 A Tantalizing Taste of Ireland in the Heart of Charlotte, NC.

Great Wagon Road Distilling Company, (GWR) is “a place with character, built by a character.” When I first saw those words on the website, it made me smiled. But when Simon, Otto and I met GWR founder and owner, Ollie Mulligan, that clever phrase became the pure unadulterated truth.

Exterior View of the Distillery (©simon@myeclecticimages.com)

We were already somewhat familiar with GWR and Ollie through our son, Kevin. And when we recently visited him in Charlotte, it seemed only natural to visit GWR and get the rest of the story.

Ollie founded Great Wagon Road in 2013, took possession of his first still in 2014, and opened his bar, The Broken Spoke, in 2015. Great Wagon Road is the oldest distillery in Mecklenburg County, and the only one in North Carolina with its own bar, at least as of this writing.

The distillery is named for the rough and rocky road taken 200 years ago by Irish and Scottish immigrants migrating from Pennsylvania down to North Carolina and Georgia. Ironically, the business also got off to a rocky start due to a shortage of new barrels, but Ollie’s tenacity and smarts succeeded in procuring the necessary equipment. GWR only uses new American white oak barrels to age its whiskey, “We make whiskey that tastes like whiskey,” Ollie insisted. So he uses wheat and malted barley with no used barrels introducing foreign flavors.

Prior to this writing, we’ve visited and written about two distilleries – St. Augustine and Jack Daniel’s – and each has been different. But what they all have in common is at least one giant copper still. In GWR’s case, it was a 1,000 gallon steam driven behemoth made in Germany. Ollie has four electric stills, but the “fraulein” is the only one currently in use.

Another similarity we found researching distilleries is the barrel room. The heavenly aroma emanating from the casks is known as Angels’ share. “We have some very happy angels here,” Ollie informed us.’

Great Wagon Road also produces vodka and moonshine. When I asked Ollie what constituted moonshine, he said there were no hard and fast rules regarding the contents. Ollie’s ingredients of choice? A blend of wheat and malted barley.

It has been the same tenacity and smarts Ollie used to procure the barrels that produced 70 percent growth over the previous year. And Great Wagon Road is now expanding to make its products available in several states outside North Carolina.

As Ollie showed us around the distillery next to The Broken Spoke, he explained the process for making Rúa, his award-winning signature whiskey. It all begins with grinding, then boiling, malted barley. When all the particles have been removed, he adds yeast to the sugary barley water that remains. The yeast eats the sugar, producing alcohol.

After five days, the fermentation process will have produced 8 1/2 proof drinkable, but less than desirable, beer.

Then the beer heads for the 1,000 gallon still for an attitude adjustment. Six hours later, the Rúa is ready for large and small aging barrels, where it mellows until it’s ready for prime time.

Ollie is meticulous when it comes to his whiskey. Everything is done in house, including the bottling.

Good water is critical to good whiskey, and Ollie won’t use the municipal water. In order to get the best water, he drives to the Asheville area, where he owns 18 acres with three springs. He makes the round trip bi-weekly, and brings back approximately 500 gallons in government approved sanitary containers.

Speaking of the government, in North Carolina, Ollie can sell all of five bottles onsite per person per year. The rest has to be sold in Raleigh, distributed to liquor stores, then Ollie has to buy it back to sell at The Broken Spoke by the bottle or glass.

Kevin once had to visit several liquor stores in order to purchase a bottle of Rúa. Finally he called the distillery to ask for the name of a store where Great Wagon Road had not yet bought back their own whiskey.

A Small Antique Still in the Entrance to The Broken Spoke (©simon@myeclecticimages.com)

Ever wanted to join a private club? Well, in Charlotte it’s easy. Apparently, thanks to yet another government regulation – you don’t want to get me started – bars that meet certain criteria fall under the category of private clubs. And if you want to patronize these establishments, you have to become a member.

Since it is what it is, I highly recommend The Broken Spoke. A one-time membership fee will set you back $1, and you’re all set.

Once the formalities are out of the way, you are free to enjoy yourself in a comfortable, homey setting arranged with groupings of inviting furniture, including leather armchairs and sofas. The Broken Spoke serves up innovative pub grub, prepared by a a chef who knows how to make the most of locally sourced ingredients. Add a wide selection of premium craft beers, creative cocktails and of course, whiskey and vodka distilled only a few feet away, and you have a first-rate recipe for a good time..

Some nights you might drop in to find live music, or an open mike ready for you to show off your talent.  And then there’s Whiskey Wednesday offering drink specials. Ollie recently hired a creative full-time mixologist, who is a whizz with whiskey and other potables. It’s no wonder The Broken Spoke is consistently gaining in popularity.

The Bar at The Broken Spoke (©simon@myeclecticimages.com)

When the upstairs room isn’t closed for a special event, it’s open to all The Broken Spoke members. Ollie is delighted at the idea that couples want to have their wedding receptions above his bar.

Ollie was born in County Kildare, Ireland. Although he worked as a telecommunications consultant and software engineer for 26 years, whiskey making was in Ollie’s DNA. “My grandfather was a distiller,” Ollie explained. “He got arrested for it. That was on my mother’s side of the family. They’re the lawbreakers. On my father’s side are the lawmakers.”

Ollie’s father was a police officer – not the one who arrested his grandfather – and began his career as a beat cop. He rose through the ranks, and was chief superintendent over two counties when he retired.

Granddad lived on a small farm in Ireland, where everyone grew their own vegetables, churned their own butter and made their own whiskey. The still was broken up and the pieces kept at separate houses. Ollie’s grandfather had the coiled copper condenser. When the next batch was due, he would step into the center of the coil, pull it up around his chest, put on his coat and ride his bicycle to the designated house.

In 1994, Ollie traveled to the U.S., despite the intense displeasure of his mother. As Ollie describes it, his decision was based on, “wanderlust, a green card and the lottery.”

Until he found a job, Ollie stayed with his brother who lived in Charlotte. Over the ensuing years Ollie lived and worked in South Carolina, Florida, Austria and California. He returned to Ireland for two years, but found he missed America. So he spent the next 11 years working in Texas.

Love took Ollie back and forth to Charlotte, until he finally settled in the North Carolina Capitol and opened Great Wagon Road.

Ollie never tasted his grandfather’s whiskey, but he has his recipe. Ollie’s whiskey is similar, but he had to make a few tweaks to bring it in line with the law.

Our tasting began with an accidental sipping vodka called Bán, made from malted barley and wheat. The way Ollie tells it, a batch of vodka was left to ferment for a week while he went on vacation. When he returned, it had taken on some floral notes. The Broken Spoke Club Members loved the vodka, so they continued making it that way. “When you make a mistake again and again,” Ollie explained, “it becomes a style.”

The Tasting Flight at The Broken Spoke (©simon@myeclecticimages.com)

Bán’s aroma was mildly alcoholic, but not harsh. The first sip produced a burn that softened as floral notes led to a smooth conclusion.

Next came Drumlich, a Poitin, (Gaelic for small pot) named after Ollie’s grandfather’s town. This was a 100 proof unaged moonshine whose nutty aroma carried over to the taste created by the barley. It produced a pleasant burn from start to finish

The Quinn’s was identical to the Drumlich, but had been barrel rested for a year. The aging softened both the aroma and added a slightly peppery note. This whiskey left much less of a burn going down.

Rúa Lined Up Behind the Bar at The Broken Spoke (©simon@myeclecticimages.com)

Rúa is the only whiskey with its ingredients on the label: barley, yeast and water.

Ready to Sample a Single Barrel Release of Quinn\’s (©simon@myeclecticimages.com)

We took home a single barrel release bottle of Quinn’s Barrel Rested Poitin, and are still enjoying the nutty barley and gentle burn.

And the Winner Is…

A year after Ollie opened Great Wagon Road, his Rúa was named the winner in the Garden and Gun Made in the South Awards 2016 Drinks Category. Ollie fondly remembers the party the magazine threw for all the finalists, and he’ll be going back this year as last year’s winner. Although no one has won the award two years running, there’s a first time for everything, and there may very well be another Garden and Gun bash in Ollie’s future.

GWR isn’t waiting around for that second Garden and Gun award, though. The distillery recently made a significant splash at the American Whiskey Masters, where Rúa was awarded a GOLD medal. Meanwhile, over at the Fifty Best, Bán and Salamander  (another GWR product) both garnered the Gold in the domestic Vodka category.

My conclusion is that GWR and The Broken Spoke have an abundance of character, and Ollie definitely qualifies as a likable, friendly, fascinating character. After sampling GWR’s liquid gold, and after spending a delightful hour or so in the company of Ollie Mulligan I can safely predict that there will be many more awards farther down the Great Wagon Road.

GWR has a delightfully refreshing FaceBook page, and I’m picky about these things. Go on over and take a look when you need a smile.

Disclaimer: Our sincere thanks go out to Ollie Mulligan for his generosity in hosting us at Great Wagon Road Distilling Co. However, all opinions, as always, are entirely my own.