“G” is for Guimaraes, Portugal: 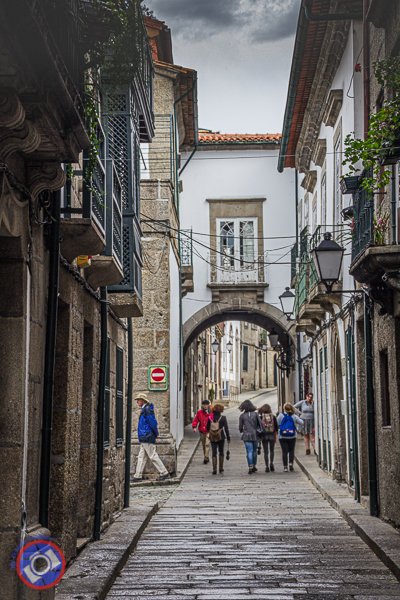 When in Porto, Take a Delightful Day Trip to this Charming Medieval Town

Guimaraes is a small city approximately 30 miles northeast of Porto. Known as the Cradle City of Portugal, its historic center is a UNESCO World Heritage Site. You can see the city in a day, which is what we did during our time in Porto.

What originally drew us to Guimaraes was its history, architecture, and reputation as a must-see Portuguese city. Guimaraes definitely did not disappoint, and as an added surprise, we were thrilled to be there during an exhibition of Leonardo da Vinci’s inventions at the Palace of the Dukes of Braganza. The displays were replicas, of course, but no less fascinating.

Guimaraes is located in northern Portugal’s district of Braga. The city was founded in the 9th century when the area was conquered by the Kingdom of Galicia. Guimaraes (or more correctly Guimarães) – known as “the cradle city” – had once been the administrative seat of the County of Portugal,  and the birthplace of Portugal’s first king, Afonso I.

Today, Guimaraes is an industrial city known for its production of textiles, shoes, and other consumer goods. It is also a popular destination for history buffs, foodies, and those looking for a change of pace.

Our Day in Guimaraes

We began our visit to Guimaraes in Largo da Oliveira, which no doubt draws its name from the large, shady olive tree growing out of its center.

There, the city proudly shows its age in the well preserved gothic architecture gracing its perimeter: the Church of Nossa Senhora da Oliveira, the former city hall, and the Padrao do Salado, a monument commemorating the Battle of Salado.

Along with the fascinating architecture, you’ll find houses painted in the traditional style of the region, outdoor cafes, and an atmosphere of harmony between past and present. At any other time, we would have gladly lingered, but we had a date with Leonardo at the palace on Largo Hill.

Palace of the Dukes of Braganza

This imposing early 15th century palace was built by a bastard. I kid you not. His name was Afonso, Count of Barcelos and he was the illegitimate son of John I. Bastard or not, Afonso and his descendants occupied the Burgundian-style structure for 200 years.

We entered the palace and made our way up the stairs, admiring the artifacts displayed on each level. The interior had been restored, and 17th-century furnishings now stood in the medieval rooms. The spaces held time-warn tapestries and weapons once used in battle.

Finally, we climbed a narrow staircase to the room where the da Vinci exhibit was temporarily housed. The Palace of the Dukes of Braganza has an elevator, and the room dividers are ramped, but sadly, there is no way for a wheelchair to access that upper room.

Following our tour of the da Vinci exhibit, we took stock of the palace’s exterior, wandering the well-maintained courtyards and gazing up at the unusual brick chimneys. They were tall and skinny, and seemed somewhat out of place with the arches and galleries that adorned the palace’s facade.

What Else to Do in Guimaraes

The city of Guimaraes has much to offer visitors. Although our time was limited, here are a few more places we would like to see some day:

What to Eat in Guimaraes

Portugal is home to a host of sweet and savory foods rich in flavor and tradition. Grilled sardines are a good choice if you enjoy well-prepared fish. For you carnivores, there’s bolo, pizza-like dough topped with pork. Not carnivorous enough? Try some papas de sarrabulho, a meaty  concoction comprised of pork, beef, and chicken. My favorite, no matter where I am in Portugal, is octopus rice, a light broth, bulked up with chopped octopus and tender rice.  It’s more of a soup, and is often flavored with cilantro.

Indulging your sweet tooth in Guimaraes is an adventure in egg land. Tortas de Guimaraes is a delectable pastry made with egg yolks, almonds, and cinnamon. Or you can try toucinho do céu,. This almond cake is also traditional to the area, and contains a staggering amount of egg yolk.

Portugal is famous for its port, sherry and wines. While in Guimaraes, try the vinho verde, a light, puckery wine that tastes best as an accompaniment to a light meal and some people watching at a café  on Largo da Oliveira.

We absolutely have no regrets about the amount of time we spent marveling at the futuristic creations produced by the genius of Leonardo da Vinci. Contrary to pop cultural belief, he wasn’t just another pretty fighting turtle. What we do regret is that we didn’t have time for further exploration of Guimaraes. All the more reason to return to Portugal when we can travel again.

Guimaraes is a city well worth a day’s visit, but two or three days wouldn’t be hard to fill savoring the treasures of Guimaraes at a relaxed pace, with periods of chilling at an outdoor café with a glass of vinho verde; sounds like a plan to me.

Guimaraes is within easy reach of Porto by bus, train or car. We had a rental, but travel by train is direct, inexpensive,  and takes 1 hour and 10 minutes. The countryside between the two cities is less than spectacular, but when you reach Guimaraes  – the last stop – you will be a short 10-minute walk from Largo da Oliveira.

The bus is slightly less expensive and may be faster than the train, but there may be many stops along the way. So, you’ll want to check both schedules before deciding your mode of transportation.

Once in Guimaraes, you won’t need public transportation as everything is within easy walking distance. A word of caution, though. The historic center consists of cobbled streets, which may be uncomfortable for people with wheelchairs or mobility challenges. There is a cable car to take you to the top of Penha Hill, so you don’t have to trek up there on foot if you’d rather not.