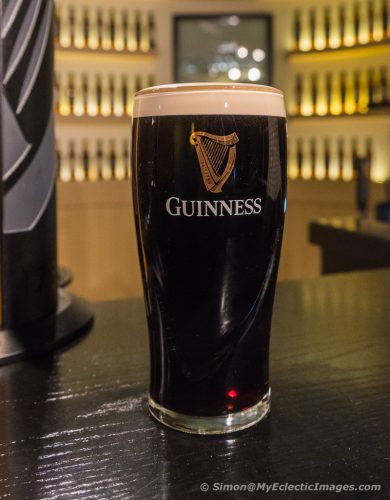 What is the proper way to drink Guinness? Well, you reverently place your lips to the rim of the iconic glass, draw up some of Ireland’s magic brew through the foam cap at the top, then work your way down to the last silky drop at the bottom. But at Dublin’s Guinness Storehouse, the process is accomplished in reverse.

Simon, Otto and I began our journey from the bottom to the top of the world’s largest Guinness pint glass, which is the heart of the Guinness Storehouse in Dublin. We were accompanied by Beth, our delightful guide, who took us upward through seven levels of Guinness history, processes, interactive displays and, of course, samples. By the time we reached the foam at the top, the seventh-floor Gravity Bar, Beth had given us a clear understanding of why Guinness is so popular and so incredibly good for body and soul.

Entrance to the Guinness Storehouse (©simon@myeclecticimages.com)

Before we began our ascent up the glass, Beth drew our attention to a copy of the lease signed by Arthur Guinness in 1759, which is embedded in the floor. We’ll take a look at both the lease and the man later on.

Copy of the Land Lease Signed by Arthur Guinness (©simon@myeclecticimages.com)

How They Make It

One of the secrets to Guinness’s unique flavor is the 10,000 tons of barley meticulously roasted every year at the facility next door. Ten percent of the barley used to make Guinness is roasted. I had the opportunity to smell a sample, and the pleasant aroma reminded me of coffee and burnt cocoa.

A Milled Used to Prepare the Barley for Fermentation (©simon@myeclecticimages.com)

Another ingredient that makes Guinness unique is nitrogen. This gas became part of the recipe in the 1950s, making Guinness the first to incorporate it into its brew. It is the nitrogen that creates the millions of bubbles which give the beer its smooth-as-silk texture.

A Giant Vat that Used to be Used to Brew Guinness (©simon@myeclecticimages.com)

Since the mortal enemies of fresh beer are light and oxygen, Guinness is transported in pressurized tanker trucks, where the gases remain dormant until the beer is served. The characteristic hissing sound you hear when you open a Guinness is a result of a widget in the cans that agitate the gasses.

Guinness produces approximately 2,000 kegs per hour. The beer is bottled and canned in Northern Ireland and England. It’s brewed in 45 countries and sold in 150 worldwide.

How You Serve It

It takes 190 seconds to pour and serve a pint of Guinness. Beth demonstrated the process to us as we watched how a pouring pro does it:

The Perfect Pint and Half Pint of Guinness (©simon@myeclecticimages.com)

How to Enjoy It

Before we could indulge ourselves in our first sample of Guinness, we needed to be appropriately prepared for the experience.

First Beth took us through a corridor of sensory stimulation – red strip lighting on the ceiling, a strong strange aroma and discordant music – before emerging into a stark white room. She then introduced us to aroma pods with fragrances of hops and roasted barley, malted barley with a somewhat sweet smell and a nearly completed product with notes of soy and caramel.

Our first sensation when we finally got to taste the chilled Guinness was sweet caramel on the tip of the tongue., which built to a rich strong roasted flavor with a slightly bitter finish from the hops. The texture was soft and creamy.

As we sipped, Beth led us into the Velvet Chamber. Decorated with drapery of rich royal blue velvet secured with gold tassels. The room was a warm place for savoring the rich flavor of Guinness. Paneling of ebony and gold marble, a replica of Arthur Guinness’s front door, a Guinness ship’s bell, and a gold barometer added unique elements to the room. Beth pointed out a cabinet door behind which rested grains of barley from King Tut’s tomb that had been sent to the Guinness laboratory for dating and analysis.

How They Sell It

According to surveys, 20 percent of the 1.7 million people who visit the Guinness Storehouse each year are trying Guinness for the first time. So it stands to reason that a lot of thought has been put into making that first experience memorable. But realistically, these visitors are a drop in the barrel compared to the world marketplace in which Guinness is a major player. So advertising is key to keeping Guinness in the public eye on an ever-increasingly competitive and crowded playing field.

On the third floor of the Guinness Storehouse, The World of Advertising spans more than 80 years of advertising history. It’s easy to lose yourself in the wide array of creative print, and TV Guinness advertising campaigns from the 30s, 40s and 50s.

Although the harp, Guinness’s universally recognized symbol, was trademarked in the 1870s, Guinness didn’t pay for advertising until 1929. The killjoy constitutional amendment known as Prohibition took away the entire United States market. At that time, there were probably as many Irish in America as in Ireland, who had brought their love of Guinness with them. They were suffering, and so was Guinness’s profit margin.

The Genius of Arthur Guinness

Arthur Guinness was a man of vision. Born in Kildare County in 1725, his father was a land steward.

Arthur acquired the property in 1759. What made his land deal one of. the sweetest in history was the lease Arthur negotiated for 9,000 years at £45 a year. The lease also included free water, an essential ingredient in the brewing of beer. Although challenged in court, this section of the lease was ultimately upheld for the original four acres of the now 55 acre property.

Olivia and Arthur Guinness had 21 children. When Arthur died in 1803, he left the brewery to his sons. The Guinness legacy now spans seven generations, and the family continues to be great benefactors to the city of Dublin.

Arthur’s signature at the bottom of the lease replica on the ground level of the Guinness Storehouse is one of the most recognized trademarks in the world. It can be found on every bottle or can of Guinness, along with the gold harp.

From its inception, Guinness offered employees such things as pensions and health care long before government benefits became available. And it was one of the first companies in Europe to offer paid vacations.

It is said that if you go to work for Guinness, you have a job for life. Low turnover, pride in the company and fierce loyalty to the brand among Guinness’s employees appear to back up this statement.

Employees have always received free lunches, and this policy continues to this day. Fortunately – or unfortunately, as some might see it –  the daily beer allowance is no longer in effect.

You can learn more about the remarkable Arthur Guinness and his family in the Guinness Archive, based in the Guinness Storehouse. There you will find records dating from the 1759 lease, as well as photographs, film, video, memorabilia, posters, maps, bottles and other artifacts documenting the history of Guinness.

A Pint with a View

Our tour ended in the seventh-floor Gravity Bar, where visitors can enjoy a complimentary pint and a spectacular 360-degree view of Dublin and beyond. Since public tours are self-guided, you can take your time getting to the bar, and then sip slowly.

A View from the Gravity Bar at the Guinness Storehouse (©simon@myeclecticimages.com)

As for us, downing a pint in the Gravity Bar following Beth’s tour wasn’t just drinking any ordinary cold one. Having learned about how it was made, the quality of the ingredients, the care with which every pint of Guinness is brewed and handled and what went into making it taste so good made it an experience to be remembered.

The Guinness Storehouse® is open seven days a week year round, with the exception of Christmas Eve, Christmas Day, and St Stephens Day.

July and August hours are from 9 AM to 8 PM. The last admission is at 6 PM.

As of 2018 adults 18 and up pay €25 at the door, however, discounts of up to 30% are available depending on the day, time slot and whether tickets are booked in advance. Students 18 and over with student ID and senior citizens 65 and up are also eligible for discounts. Children under 13 receive free admission.

It is recommended you book your tickets in advance for the Fast-track line, to receive discounts of to 30% for adult tickets and to pre-order personalized Guinness glasses.

For an additional charge, you can upgrade to the Ultimate Guinness Tasting Experience, which includes a 1.5 hour tutored Connoisseur session. Space is limited to 16 participants 18 years and up, and must be booked in advance.

A visit to the Guinness Storehouse can work up hunger as well as a powerful thirst. You will find a delicious variety of bars, cafes and restaurants from which to choose to meet your needs and fortify you for further exploration.

What would a major attraction like the Guinness Storehouse be without a gift shop? The Guinness® Retail Store contains the largest collection of Guinness memorabilia and exclusive merchandise in the world for your shopping pleasure.

The Arthur Guinness Business Centre, located on the third and fourth floors offers facilities for training and conferences. Event venues that can cater for 20 to 1,000 people makes the Guinness Storehouse ideal for business meetings and celebrations large and small.

The Guinness Storehouse is wheelchair accessible with elevators and restrooms. Care has also been taken to make the website user-friendly for individuals who are blind and visually impaired.

Disclaimer: Our heartfelt gratitude goes out to Failte Ireland and the Guinness Storehouse for making our incredible experience possible. However, all opinions, as always, are entirely my own.