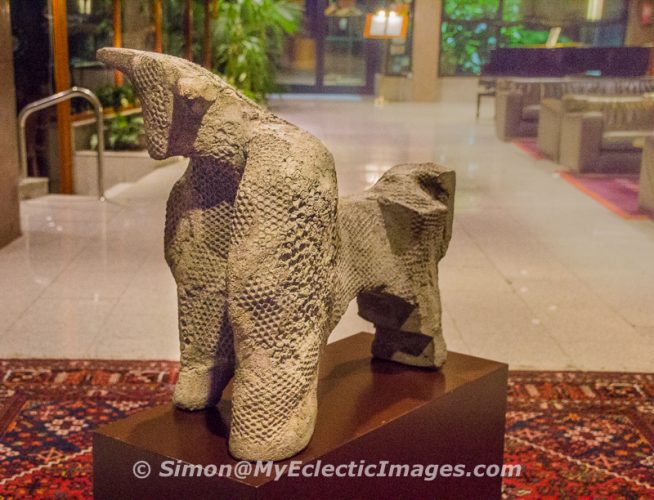 As we drove slowly through the center of Girona in search of our accommodations, what we saw was anything but awe-inspiring. Perhaps it was the long drive from Guadalajara, or the fact that we were just plain tired, but everything around us seemed drab and uninteresting. But when we stepped into the welcoming lobby of Hotel Carlemany, our perception was completely altered.

In June, 2016, Simon, Otto and I were guests of Patronat de Turisme Costa Brava, Girona for four days of inspiration and insight exploring some of the many breath-taking aspects of Spain’s stunning Costa Brava.

Hotel Carlemany wasn’t simply a place to rest our weary heads after a long day of sightseeing. It was more like a home away from home, where we could relax, enjoy outstanding food and work without distraction.

If Hotel Carlemany was a child, it would surely be in therapy. Occupying what was once a convent, it was originally intended to be a downtown mall. But politics and other factors put the kibosh on the project, and the result was, well, a hotel.

Despite early hick-ups, Hotel Carlemany is now a modern, comfortable, conveniently located place to stay, whether you’re on business or vacation in Girona.

Your introduction to the hotel is its spacious and functional lobby. You can access any one of the hotel’s three restaurants, settle into a comfy sofa for conversation, contemplation or people-watching, or you can ramble around perusing paintings, sculptures and a large tapestry that capture the essence of Girona. Pieces from Carlemany’s collection of over 70 original works of art can be found throughout the hotel.

Tapestry Hanging in the Lobby of the Hotel Carlemany in Girona (©simon@myeclecticimages.com)

An arresting, and touch-friendly, sculpture in the center of the lobby called “Brau, The Bull” by Emilia Xargay, had my full attention. I was able to explore the details of this modern, yet identifiable work without anyone giving me the ‘hands off’ treatment.

Jordi Mias Morell, Hotel Carlemany’s personable and approachable General Manager, took time out of his busy day to answer our questions, and tell us about the hotel’s beginnings. After seven years in this position, Jordi has seen his share of changes. From a major renovation in 2008, to the current remodeling that began early in 2016, making Carlamany more guest-friendly and accessible is an ongoing process.

Hotel Carlemany has 90 rooms and suites with a variety of options from which to choose. Our room was a standard double with a minibar, large windows overlooking the central square and functional, yet comfortable, furnishings.

A Standard Room in the Hotel Carlemany in Girona (©simon@myeclecticimages.com)

The hotel also offers suites designed with families in mind, and suites specifically appointed for the business traveler.

In keeping with the hotel’s commitment to inclusion, spacious wheelchair accessible rooms are also available.

When it comes to keeping guests well fed, Hotel Carlemany has all the bases covered.

The Pati Berd Restaurant serves up a sumptuous breakfast buffet, which includes hot and cold offerings like scrambled eggs, bacon, smoked salmon, fresh fruit, cheeses, cold meats, fresh breads and pastries and freshly squeezed orange juice. After the breakfast crowd has waddled off, Pati Berd is magically transformed into a fine dining restaurant by dinner time. Considering all the walking we were doing, that breakfast held us well into the afternoon.

The hotel has a coffee shop where you can get sandwiches and other light fare during the day, and a bar/casual dining area called the Indigo Restaurant.

We were invited to sample the latter on our first evening in Girona. The menu was eclectic with traditional Catalonian tapas and fish, as well as dishes with Italian, Asian and Middle Eastern influences.

For our appetizer, we were treated to a generous assortment of tapas, including battered squid rings, tempura vegetables with a soy dipping sauce, Iberian ham and fresh crusty bread and buffalo mozzarella serve with pomegranate and a fig jam. The house wine, a crisp sauvignon blanc, paired especially well with the cheese.

We were then each offered our choice from a selection of entrees. Simon chose the Girona veal Sirloin served with a vegetable medley and crusty toast. We both agreed the meat was lean and tender with a smoky grilled flavor. It appeared to have been seasoned with sea salt before grilling. And that, my friends, is where our like-mindedness ended. To me the veal was perfectly cooked, which meant it was medium rare. But Simon saw pink, making it, by his standards, unfit to eat. To his credit, Simon got it down, and even admitted it was delicious.

Having perhaps enjoyed the appetizer course a little too much, I opted for something light. My tuna tartar arrived accompanied by a piece of that evil fresh crusty bread and a salad of leafy greens tossed in a light vinaigrette. The tuna was more like a fine dice than something that had been through a grinder. It was a healthy red color, with a mild, delicate flavor. and no ‘fishy’ taste.

The red wine that was served with our entrees had a hint of blackberry, giving it a slightly fruity undertone with an oaky finish. The wine paired well with both the veal and tuna.

For dessert, Simon dove into a dish of decadent chocolate fondant layered with a blackberry coulis and violet ice cream. The latter was purple with a gentle hint of floral. The combination was nothing short of outrageous in all the best ways.

Still opting for light, I chose the Creme Catalan, one of my favorite desserts when I’m in the region. Gently cracking the burnt sugar topping with my spoon, I scooped up the creamy, not too sweet bottom layer, and reached gastronomic nirvana.

While we were enjoying our meal, there was an ‘important’ football match, and diners were vocal in their reactions to what was transpiring. Although we were aware of both the television and the sports enthusiasts, the noise level was nowhere near intrusive.

The restaurant has outdoor seating, but you’ll pay €2.50 for the privilege of dining with the smokers.

Call me a brat, but there are certain criteria that need to be met before I will pay to stay anywhere outside my home sweet home. It has to be clean and have a comfortable bed, good shower and reliable internet. Hotel Carlemany met all my requirements, and included some delightful extras.

Not only was the bed a joy on which to sleep, the Egyptian cotton linens felt like a cool salve against my skin. The ‘designer’ toiletries were more abundant and sweeter-smelling than the average hotel offerings, and included a comb, razor and other grooming tools. The exquisite rain shower felt like heaven after a long day. And best of all, we had a welcome respite from the slow-to-nonexistent internet access that had plagued us since we arrived in Spain two weeks earlier.

Display of Toiletries Provided by the Hotel (©simon@myeclecticimages.com)

Hotel Carlemany is pet-friendly, offers free wi-fi in rooms and public areas and a discount at an underground parking garage with direct access to the lobby.

The hotel also has a business center, meeting rooms and banquet facilities. that can hold up to 400 people

All common areas are wheelchair accessible. There is a ramp leading to the front entrance, and standard doors on one side of the revolving door. This was also a welcome alternative for Otto and me, who hate wrestling with those infernal spinning monsters.

We left Girona with the feeling that we had witnessed something special and good at Hotel Carlemany. During our conversation with Jordi, he expressed his pride in the accessibility of the hotel, which was consistent with the general attitude of inclusiveness we found throughout our Costa Brava visit. It was evident to us that Hotel Carlemany constantly strives to give every guest the best experience possible.

With this in mind, Simon pointed out the doorframe surrounding the elevator doors. Although Braille and raised numbers were present on the buttons in the car, there was no way for a person who was blind to know with certainty on which floor the elevator was stopped. Instantly, Jordi understood the problem, and was interested in hearing our suggested solution: a plate with a large raised number on the doorframe, of each floor which anyone could reach from within the elevator and know exactly where he or she was.

Although there was no shortage of quality and comfort at Hotel Carlemany, it was the friendliness and thoughtfulness of everyone we met that made this hotel stand out among the best in our experience.

Disclaimer: Our visit to Girona was generously hosted by Patronat de Turisme Costa Brava, Girona  and Hotel Carlemany, however, all opinions are entirely my own.