Be Prepared for Royal Treatment at The King’s Daughters Inn: 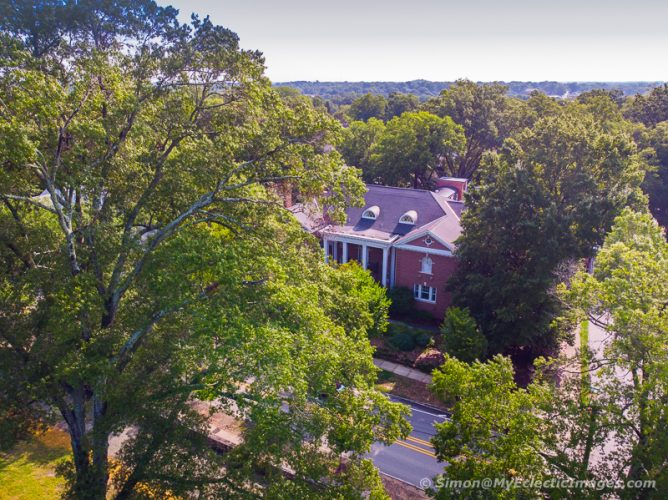 Luxury, Tranquility and Sustainability in the Heart of Durham, North Carolina.

Durham is well known for basketball, Duke University and Duke Medical Center. It is also a city that not only promises a surprise around every corner, it delivers. So when you want an ideal location for a family vacation or romantic getaway, the King’s Daughters Inn is an excellent home base for exploring Durham.

Simon, Otto and I were fortunate to have done just that, in August, 2018. After spending our days indulging ourselves in the iconic and lesser-known aspects of Durham, we found an oasis at the King’s Daughters Inn. Their tag line is, “Modern history, Urban elegance.” We found both in our spacious room, the inn’s cozy public spaces and the luxurious touches that made this charming boutique hotel an instant favorite..

Conveniently located in Trinity Park, one of Durham’s oldest, walkable neighborhoods, the King’s Daughters Inn provides guests a soothing view of the green spaces and magnificent oaks of Duke University’s East Campus, The inn welcomes visitors of all kinds. Whether you’re in Durham for business or pleasure, you are a short walk from Duke University, downtown Durham, Brightleaf Square, and 9th Street. A short drive will take you to Research Triangle Park, Raleigh-Durham Airport, and the Durham Performing Arts Center.

The Parlor of the King’s Daughters Inn (©simon@myeclecticimages.com)

The King’s Daughters Inn is a historic brick Colonial Revival building which includes 17 rooms and suites, a roomy, yet homy, parlor, an even larger dining room and a sun porch. At this hotel, privacy is maintained, while socializing is facilitated and encouraged. With its 8 foot wide hallways, 12 foot high ceilings and 6 foot tall windows, The King’s Daughters Inn is open, bright and welcoming.

The inn’s staff is friendly, helpful and professional. Snacks, non-alcoholic beverages, as well as a selection of cold and freshly prepared hot gourmet breakfast items are complimentary.

At the King’s Daughters Inn, no two of the 17 individually decorated rooms are alike. The second-floor Cruz Room in which we stayed was located in a corner of the building. It was bathed in natural light courtesy of four windows that looked out on Duke’s East Campus and the inn’s large magnolia tree.

The décor was warm and whimsical. Shades of honey, cinnamon and cocoa set off the golden tones of the heart-of-pine floors. Luxurious fabrics combined with artichoke-based lamps blended seamlessly to give the space a feel of class without pretentiousness.

The complimentary orange accented chocolates and port at bedtime were a delightful end to the day. The king size bed was over-the-top comfortable with fine sheets that made me feel as if I was wrapped up in a hug as I slept. And for the techno-geek in me: a USB port was located atop the clock radio.

The room checked every one of my boxes. The wifi was easily accessible and fast, the water pressure in the shower was better than good and the bed was comfortable (see above).

The hot breakfasts were creative, flavorful and substantial. And of even greater importance to me, the coffee was excellent.

The King’s Daughters building has been a part of Durham’s landscape since 1911, but it didn’t start out as an inn.

A nondenominational Christian organization known as the Sheltering Home Circle of Durham NC, formed a local chapter of the International Order of King’s Sons and Daughters. This group dedicated its efforts toward philanthropic and educational causes. The Durham organization founded the King’s Daughters Home as a residence for elderly single women.

The parcel of land across the street from Duke University was donated by Brodie Duke. Along with proceeds from fundraising efforts and support from the community, the first home was established. But the need for this type of housing soon outgrew the original structure.

This time, all three Duke brothers – James B., Brodie, and Benjamin – made generous contributions to the new, larger  residence which opened its doors on New Year’s Day 1926. This was the multi-room, two-story structure we now know as the King’s Daughters Inn. At the height of its occupancy, the residence was home to 34 women and nine full-time staff members.

As time went by, senior high-rises and assisted living facilities with onsite medical services began to replace residences such as the King’s Daughters Home. By 2006, only three women remained in the building, and the Circle closed the facility.

The Circle put the property up for sale, but after a year, it was still on the market. This wasn’t for lack of interested buyers. In fact, would-be purchasers proposed converting the property into condominiums, a prospect that didn’t sit well with the Circle’s women.

Enter Colin and Deanna Crossman, a young couple with an entirely different vision for the future of the building and the property on which it stood.

New Owners with a New Vision

Deanna and Colin’s love story began when they purchased houses across the street from one another. They were Duke graduate students. Deanna studied Cell Biology and Colin studied Law. But once they began working in their respective chosen careers, they both came to the realization that they wanted to do something that was more in line with their values and philosophy.

Since they had a common interest in responsible green historic home restoration, it was only natural for the couple to spend their honeymoon studying at the Green Building School at The Shelter Institute in Maine. Deanna and Colin then applied what they had learned by renovating 34 rental houses.

The couple immediately recognized enormous potential in the King’s Daughters Home after Deanna’s mother persuaded them to take a look at the building when it came on the market in 2006, Based on their knowledge and values, converting the home into a boutique Bed and Breakfast made perfect sense.

The Crossmans knew their plan would have a positive impact on the Trinity Park neighborhood. They were committed to preserving the historic architectural integrity of the building, and utilizing green technologies in order to protect the environment.

All Deanna and Colin’s careful planning and hard work came to fruition on April 18th, 2009 with the opening of the King’s Daughters Inn.

The Crossman’s commitment to building green wasn’t merely talk. Here are a only of few of the measures they took to insure the King’s Daughters Inn would be as friendly to the environment as possible:

Whenever possible, the Crossmans purchase the products and services they need to run the inn from local producers. They are also full participants in Durham’s recycling program.

Preserving the Past While Embracing the Future

The Grand Staircase at the King’s Daughters Inn (©simon@myeclecticimages.com)

Deanna’s and Colin’s efforts to maintain the historic and architectural integrity of the building are in full view. From the two story box columns of the front portico, to the soaring arched windows and the grand staircase, you are transported back to the early 20th century. Much of the original interior features have been preserved or replicated; the heart-of-pine floors, fireplaces with marble mantels and plaster moldings,. The original layout remains intact With the exception of one wall. The corridors, parlor, dining room, and sun porch are preserved in their original locations.

As if all this isn’t enough to keep the Crossmans busy, they recently took on the renovation of a hotel in Nevada. But Deanna’s and Colin’s hearts and lives are closely tied to Durham and the King’s Daughters Inn. “This is my first baby,” Deanna said. I have two human babies now, but this was my first. People ask me how I can do this every day, but this is fun.”

Although Deanna grew up in Santa Rosa, California, she and Colin love living in Durham and are fully invested. “This is the first community where, it didn’t matter who it was,” Deanna explained. They cared about making the community better. They celebrated the good, but weren’t afraid to talk about how to make the bad and the ugly better.”

The King’s Daughters In is a harmony of the historic and the new, the classy and the homy, as well as excellent service and a friendly atmosphere. “It’s the best of everything,” Deanna said. Our entire focus is on the guest experience.” If our stay was any indication, Deanna was right on both counts.

The King’s Daughters Inn is fully wheelchair accessible with a street-level entrance and an elevator to upper floors. The Womack guest room is ADA-approved and has been specifically designed to accommodate people with disabilities.

Disclaimer: Our visit to Durham was generously hosted by Durham Convention and Visitors Bureau and the King’s Daughters Inn. However, all opinions, as always, are entirely my own.