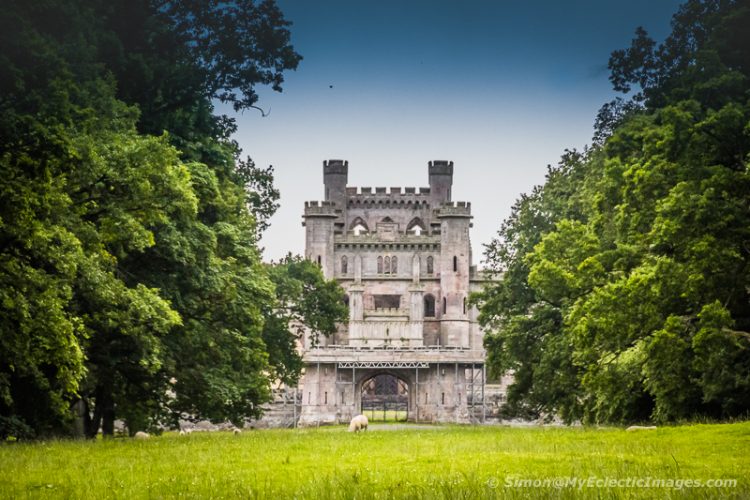 This Lake District Wonderland Rises From the Ashes of Excess and Neglect.

The sun was out. Perhaps not exactly a reason to get wildly excited, but after a week of continuous rain throughout our visit to England, Simon Otto and I were absolutely elated. Aside from the opportunity to spend several hours outdoors without constantly dodging showers, we were anticipating our visit to Lowther Castle and Gardens, a fascinating Lake District site with a bizarre back story.

Upon our arrival, we were greeted by Anna Saczes, who gave us a tour of the castle ruins and gardens. As we walked the smooth paths surrounding the castle, she imparted historical information and insights that added dimension to the beauty surrounding us.

The site of Lowther Castle and Gardens is located amid the tranquility of England’s Lake District near Penrith in Cumbria. The castle itself is in fact a roofless structure, which, along with the surrounding area, has become a showcase for nature’s generosity and man’s creativity. The Structure of Lowther Castle Open to the Elements (©simon@myeclecticimages.com)

In 2011, five years following the death of the 7th Earl of Lonsdale, his son, James, heir to the Lowther Castle property, spearheaded a project to revitalize the gardens. During WWII, Lowther Castle had been requisitioned for, among other things, a testing area for tanks, and the gardens had been paved over. Now, the concrete is gone, and flowers, trees and plants have reclaimed the land, but the gardens are still very much a work in progress.

Our first stop was the parterre tapestry garden. Designed to have the appearance of an old piece of woven cloth representing the castle ruins. The grasses and plants were laid out in rows to resemble the warp. Pops of brightly colored flowers of purple and hot pink added to the effect of uneven deterioration.

Perhaps the most unique feature of the gardens was the one planted within the roofless walls of the castle ruins. The structure had been designed with rooms such as the library, dining room and drawing room on the ground floor. The upper level, which no longer exists, contained a warren of small rooms. Old photos and plans make it easy to imagine what the building looked like in its heyday.

Gardens Created within the Walls of Lowther Castle (©simon@myeclecticimages.com)

Within the footprint of the ground floor a garden throwing out blooms – profusions of brilliant yellow poppies, intensely red Scottish Flame – drew the eyes in all directions at once, clamoring for attention. Stones from the ruins were integrated in the design of the plants, and young trees held the promise of some day providing extensive shade for the area. Plants will be allowed to cascade their foliage over the paths’ boundaries. This will culminate in an effect of coming across a secret lost garden.

On the walls we could see the locations of fireplaces and windows. Wires were hung in several to accommodate climbing plants such as the Scottish Flames, which were flashing their fiery presence in a vertical direction.

As we explored more of the gardens, white flashes from flowers of all sizes, familiar dogwood trees reminding us of our years in Tennessee and every shade of green imaginable nodded in the soft breeze as we passed. Beds of wild flowers eased the transition from the formal gardens to the wild areas of the property.  We came upon an arrangement of red and yellow tiles from the floor of the winter garden that had been found under layers of moss. A garden grew wild in the cracks and around the perimeter. All these delightful surprises are a result of the genius of designer Dan Pearson and head gardener Martin Ogle, who based the gardens around a 17th century layout

The Lothers have been landowners in Cumbria for 800 years. Many enjoyed prosperity and fame. But it was the 5th Earl of Lonsdale, known as the Yellow Earl, who brought Lowther Castle and his family to their knees.

The castle whose ruins we see today was built between 1806 and 1814 in Gothic Revival style. Nothing out of the ordinary took place until 1892, when Hugh Cecil Lowther, inherited the title of Earl of Lonsdale, and all that came with it. Why Yellow Earl? To the best of my knowledge, he wasn’t chronically jaundiced, nor was he reputed to have been a coward. He just happened to have an abnormal fondness for the color yellow. It was part of the family crest, and Hugh decided to run with it. From his Rolls-Royce to the uniforms of his servants to his horse and dogs, everything was yellow or a representation there of.

If a fixation with yellow had been his only quirk, the castle might yet be standing. Unfortunately, Hugh was also extravagant, reckless, irresponsible, flamboyant  and a rake. He hung out with the likes of Kaiser Wilhelm, was a fan of racing, boxing and fox-hunting and loved to travel in style.

By the time Hugh died in 1944, the family finances were in ruins, and Lowther Castle was closed. Hugh had been the last Earl of Lonsdale to live within its walls.

Everything in the castle was sold, including the wood paneling. Anna told us that when the Antiques Road Show came to the area, townspeople showed up with family heirlooms purchased by an earlier generation. The array of Lowther memorabilia included a variety of unusual items, such as stuffed pet dog.

Over the years, Lowther Castle was used by the British military, as a farm for breeding battery chickens and home to a forest of spruce trees. Today it is making an amazing comeback, And if what we saw is any indication of the future, the best is yet to come.

Our timing for visiting Lowther Castle may have been spot on weather wise, but not so when it came to the Lost Castle. This family oriented fantasy feature was scheduled to open less than a month later, and offered an adventure playground created for the child in all of us.

Magic awaited the Lost Castle’s first visitors, a pleasant walk from the gardens, Deep in the woods, under the tree-canopy,. We knew the Lost Castle would be a splendid treat for children and adults alike.

The Lost Castle While Under Construction in the Grounds of Lowther Castle (©simon@myeclecticimages.com)

The structure represents the castle’s glory days, and in keeping with Lowther’s commitment to conservation, was constructed with sustainably grown timber. Among other features, the Lost Castle comes fully equipped for family fun with turrets, zip-wires, slides, and tree-shaded walking paths. You can bring a picnic, or enjoy a snack at the into the woods café..

“We want people to come and explore, and get in touch with nature,” Anna explained, “as well as to learn the history of the castle.”

In order to continue the project, Lowther Castle’s core of enthusiastic, dedicated volunteers assist the staff with gardening and special events. Several years ago, 600 volunteers came out for the day, and planted 106,000 daffodils . “The gardens wouldn’t be as far forward, ” said Anna proudly, “if it wasn’t for our volunteers.”

A day at Lowther Castle and Gardens is a delightfully refreshing way to leave the turmoil of today’s world behind. If we all had such an opportunity to relax in a peaceful spot like this, there might actually be less turmoil to escape.

Lowther Castle is open daily year round, with the exception of Christmas day.

Admission to the gardens and adventure playground is £9 for adults and £7 for children 3 – 15. Children under 3 are admitted free of charge. Families consisting of 2 adults and up to 3 children pay £29. You can save 10% if you book online.

A café, restrooms and gift shop are located on the premises.

The castle, ruins gardens, restrooms, café, Lost Castle and gift shop are wheelchair accessible. However, some areas may be challenging or nonnegotiable for visitors with mobility impairments.

More information on the castle, gardens or upcoming events can be found on the Lowther Castle website

Disclaimer: Our sincere thanks go out to Lowther Castle’s Marketing Coordinator, Anna Saczek, who generously shared her time and insights with us during our complimentary visit. However, all opinions, as always, are entirely my own.