The Stunning Mosaics of Madaba: 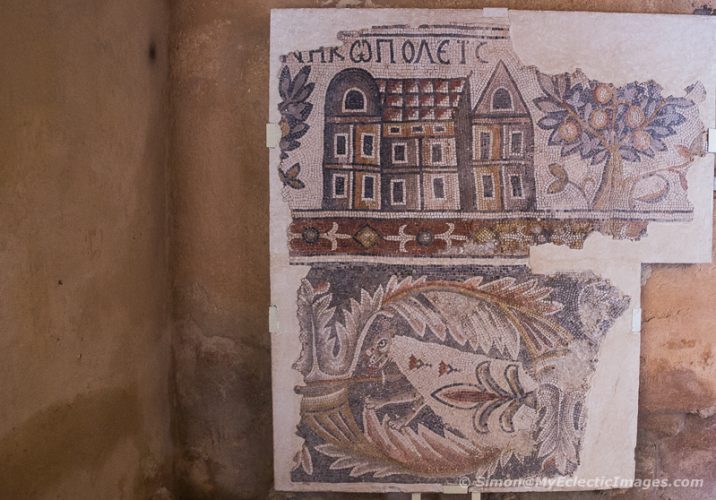 The day was picture perfect. The sun was a warm yellow orb against a clear blue sky. The temperature was mild with a soft breeze. But what Simon, Otto and I were about to discover in the central Jordanian town of Madaba, made this glorious meteorological event pale in comparison.

We had left Amman that morning, on our way to the magnificent archeological treasure trove we knew awaited us at Petra. But the Byzantine mosaics of Madaba drew us off the King’s Highway for several hours of wondrous exploration. This stop on the road to Petra was well worth the time.

If you could see only one mosaic in Madaba, it should be the Madaba Mosaic Map on the floor of the Greek Orthodox Church of St George. With a Jordan Pass, your admission to all the Madaba sites are covered with the exception of this church. But your visit will only set you back a whopping 1 JD ($1.40), and is absolutely worth it. Key to the Mosaic Map (©simon@myeclecticimages.com)

The Madaba Mosaic Map is the oldest known map of the Holy Land. Designed and assembled by unknown artists and craftsmen of the sixth century AD, the map is comprised of more than a million tiny pieces of colored stone and glass.

Part of the Madaba Mosaic Map Focusing on the Area Around Jerusalem and the Dead Sea – Note that the Map is Turned Sideways so that North is to the Left and East is at the Top (©simon@myeclecticimages.com)

Originally located in a now destroyed Byzantine cathedral, the Mosaic Map measured over 50 feet by 18.5 feet. It began in Lebanon in the north and ended at the Nile delta in the south. The remains of the map lay undiscovered until 1884. By the time the current church was built over the map in 1896, its historic significance and artistic value was just beginning to be recognized. Part of the Madaba Mosaic Map – Note that the Map is Turned Sideways so that North is to the Left and East is at the Top (©simon@myeclecticimages.com)

To say there is a lot going on would be an understatement, but the primary focus of the Mosaic Map is the “Holy City” of Jerusalem. The magnificent scenes include the hills surrounding the city, the walls and gates, as well as landmarks, such as the central colonnaded street known as the cardo. The map also depicts 36 significant structures, including the Church of the Holy Sepulcher..

If I’ve left you with the impression that only the Madaba Mosaic Map is worth your time, nothing could be farther from the truth. Each site has its individual character and story. Although scattered among several structures in the north of Madaba’s city center, seeing them one at a time will enable you to appreciate their workmanship, history and resilience.

The Church of the Apostles houses a large floor mosaic depicting scenes of mythology and everyday life, as well as nature in all its glory: birds, fish, animals, plants and flowers. It can be viewed from a balcony up a short flight of stairs. When we visited, Simon became increasingly frustrated with his inability to obtain the shots he wanted from the balcony. Simon asked an employee at floor level if he could give him his camera to take a photo for him. The man agreed, took a photo and then did one better. He invited Simon to join him at mosaic level, and take his own photos. Madaba’s Archaeological Park and Museum complex is a symbol of Jordan’s commitment to the preservation of its fifth, sixth and seventh century mosaic treasures. There you will find the Church of the Virgin, as well as other Byzantine churches. This site also houses a portion of a 6th century mansion known as Hyppolitus Hall. These structures cling to their places in history by way of their mosaics.

Mosaic from Hyppolitus Hall Found Under the Church of the Virgin and Now Part of the Madaba Archeological Park (©simon@myeclecticimages.com)

The museum is home to a large collection of mosaics originally discovered at several locations. This insures the preservation of these historic and artistic remnants, and enables visitors to take their time and appreciate their beauty and significance.

Another demonstration of Jordan’s commitment to Madaba and its mosaics is the Madaba Institute for Mosaic Art and Restoration. There, artisans are taught the skills required to create original mosaics. The Institute also offers training in the repairing and restoration of existing pieces. The Jordanian Ministry of Tourism provides funding for this one-of-a-kind project.

Many other mosaics can be found throughout Madaba. Most are within easy walking distance of each other, giving you a golden opportunity to get in a little exercise while enjoying the fascinating sites, sounds and delicious smells that surround you. One of the Many Mosaics Preserved at the Madaba Archeological Museum (©simon@myeclecticimages.com)

Madaba is located less than 20 miles south of Jordan’s capital of Amman, Take the 5000-year-old King’s Highway, and enjoy the views of ancient ruins along the way.

Until the late 1800s, The story of Madaba was, for the most part, a sad one. The city’s history began prior to 1300 BC, and the Bible refers to it as Medeba.

Madaba managed to grow and flourish despite a steady parade of conquerers. In the 1st century AD, it was the Nabataeans. Then came the Romans, who built their customary walls and temples. Under the Byzantines, the city became an important religious center, and during their rule, spectacular mosaics were created for churches, public buildings and private homes.

Then, in 614 AD, things took a definite turn for the worse. The first major calamity was the sacking of the city by the Persians. Just over a century later, the earthquake of 747 AD reduced Madaba to rubble. The destroyed city was abandoned, and left to languish for over a millennium.

In the 1880s, Madaba was settled by approximately 2000 Christians fleeing increasing friction with the majority Muslim population of their town. It was during the rebuilding of Madaba the mosaics were discovered lying beneath the ruins.

Today, Madaba, known as the City of Mosaics, boasts the fifth largest population in Jordan. Of this population, approximately 10 per cent is Christian. Because of this, alcohol is more widely available than in the rest of Jordan.

I would encourage anyone visiting Jordan to spend a day in the City of Mosaics. Madaba is a welcoming place offering incredible historic art, friendly people and a perfect way to immerse yourself in the magic of mosaics. Drinking is optional. As for me, I’d much rather get drunk on Madaba.

St. George’s church is wheelchair accessible, parts of the Archeological Park and the Museum of Archeology are also accessible. Regrettably the viewing gallery at the Church of the Apostles is several stairs above ground level with no ramp available, however part of the mosaic here can be seen from the entrance area.

More information about Madaba and its stunning mosaics can be found here.

Disclaimer: A considerable portion of our Jordan experience, including our Jordan Passes, was generously hosted by Jordan Tourism Board. However, all opinions, as always, are entirely my own.