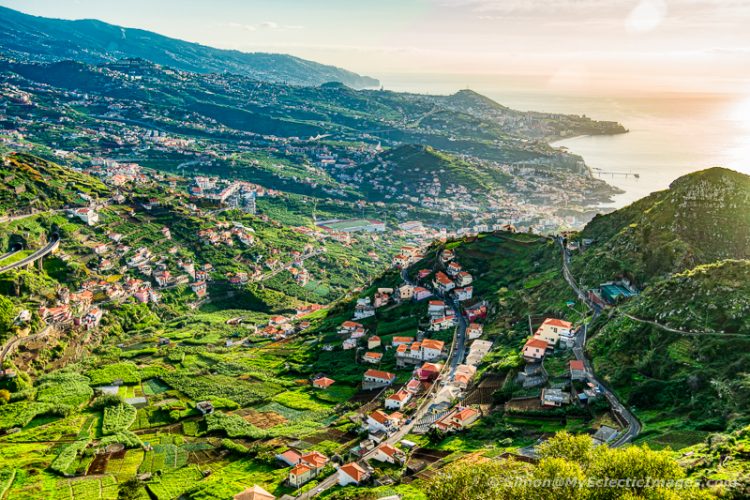 A Knowledgable Guide Plus a Sturdy Jeep Equals a Perfect Day in This Island Paradise.

We were asleep when our cruise ship, the Holland America Nieuw Statendam docked at Funchal, the capital city of the Portuguese island of Madeira. But once fully conscious, Simon, Otto, and I couldn’t wait to get feet and paws on dry land to explore. Madeira has a rugged coastline and one of the highest and most dramatic cliffs in the world. Simon was chomping at the bit to take advantage of the photographic opportunities Madeira’s rustic landscape offered. To this end, we employed the services of Lido Tours, a Madeira-based, government bonded and licensed tour company.

Operating a variety of tours, Lido has been in business since 1996, and has a stellar customer and safety record. We discovered Lido while searching for an alternative to the tours offered by the ship.

Now, I have nothing against cruise ship shore excursions, but we prefer smaller, more personalized tours to being shepherded about in a large group with little opportunity for Simon to take the number and quality of photographs he wants. In fact, our ship-organized tour of the Andalusian mountains two days earlier, although interesting and enjoyable, turned out to be just such a tour. So we were delighted to find Lido Tours as a more flexible and less expensive alternative for our venture into the mountains of Madeira on a Jeep Safari.

Diogo was in his mid-twenties whose easy, but professional manner enabled us to relax and made the entire day a truly delightful experience. Born and raised in Madeira, Diogo’s love for the island was apparent through his knowledge of Madeira’s history and current-day attributes, as well as his appreciation of the place he calls home.

Once Diogo decided on a career in tourism, he took the necessary steps to achieve his goal. “You need to speak at least two languages besides Spanish and Portuguese to work in tourism,” he told us. The languages Diogo chose were French and English.

Not satisfied to simply take language classes, Diogo chose to live and work in both England and Switzerland because he believed total immersion was the best way to learn the languages. With this kind of courage and commitment, I predict this young man will go far in life.

The Island of Madeira

As we began our drive into the mountains, Diogo gave us a brief, but informative, lesson on Madeira, past and present.

Madeira is an autonomous region of Portugal with a population of 267,000. It is subject to Portuguese law, but has its own president, government, and ability to pass additional laws specific to the island.

The. island was officially discovered by Portuguese mariners in 1419. However, evidence exists that Italian explorers located the area of land that would some day bear the name Madeira a century earlier.

Diogo explained that the Portuguese brought sugar cane to Madeira, but didn’t begin seeing a large profit until they turned it into rum. Madeira rum took home the gold medal in 2016 at the London International Spirits Challenge.

Madeira has an official drink called Poncha, and it definitely packs one. This lively concoction is a blend of rum, lemon, and honey. Diogo introduced us to both the. lemon and passion fruit flavors, and we couldn’t resist purchasing some of each to take home to share with our friends.

Sugar cane, grapes, and bananas – introduced by the Portuguese in the 1700s – are Madeira’s most prolific agricultural products. In fact, Madeira produces 110,000 tons of bananas annually. The surplus of this golden bounty is exported to Portugal.

An average of 1.5 million visitors flock to Madeira’s shores each year. Most of these tourists come from the U.K. and Germany. But according to Diogo, many Italian, Spanish, French, and Portuguese, make the island their summer destination. Surprisingly, not many travel from the U.S., Canada, or China.

The jeep in which we rode was clean, comfortable, and well maintained. Diogo drove us up the mountain on a secondary road where he knew the views would be the best. The road became steeper and more twisty as we climbed higher. Diogo was a skilled driver, so we were able to relax and take in the spectacular vistas unfolding below us. Views of villages, banana groves and vineyards, the sparkling waters of the Atlantic, and the people of Madeira going about their daily lives filled our eyes and imaginations as we ascended into the clouds.

At first, the sky was part cloudy and part blue. Then the air became cooler and more humid as the clouds surrounded us. Once we had broken through the cloud layer, we saw blue skies above us and the cloud bank below. “It’s almost like flying,” Simon commented.

At approximately 5,000 feet, we reached the second highest dramatic cliff in the world, the highest being in Hong Kong. Diogo noted that on a clear day, the view from this vantage is beyond compare. Guess we’ll just have to come back.

At this elevation, the ground cover was bracken surrounding forests of tall, lush eucalyptus trees. Wood from these trees is exported to Portugal for paper. Eucalyptus is also used to produce medicines, candy, and liqueur. Diogo stopped to pull a low-hanging branch for us to smell. The aroma was near intoxicating.

Diogo brought us crashing back down to earth by noting that the biggest criminal offense on the island is setting forest fires. In 2016, a fire deliberately set by four teenage thugs destroyed two per cent of Madeira. The fire lasted four days and obliterated over 100 homes.

Because eucalyptus trees grow at a rapid rate, the ravaged forests are returning. As we drove, we could see charred trunks topped with green foliage.

A Haven for Locals and Visitors

As stunning as the scenery in the mountains of Madeira may be, Diogo showed us some of the other treats to be found. We visited quaint villages like Ribeira Brava, saw picnic areas, and stopped for an authentic Madeira lunch in Porto Moniz.

Camping is an option in these mountains. And for those afraid of wild animals, there are none. That’s right, no bears, foxes, or even deer. Your biggest worry will be stepping in piles left behind by cows, sheep, and goats.

We could easily have spent a week in the mountains without fear of boredom. Sadly, our single day came to an end far too soon. What we came away with was an appreciation of Madeira and its remarkable mountains. We highly recommend Lido Tours to show you the best of the island, and we look forward to some day touring Funchal with one of their articulate and personable guides.

Along with their Jeep Safari tours, Lido tours offers several options for exploring Madeira. You can enjoy a walking tour, or familiarize yourself with Funchal on an open-topped tour bus. Lido also offers boat tours for a different view of the island of Madeira and surrounding areas.

Our Jeep – Porto Moniz 4×4 Tour was a full day (9:00am to 3:00pm) trip into Madeira’s magnificent mountains, which included a break for lunch on our own.

The current cost for this tour is €40 for adults and €20 for children under 10 years old. Lunch at the recommended restaurant costs €15 per person.

Disclaimer: Our sincere thanks go out to Lido Tours for their generous media rate on our tour. However, all opinions, as. always, are entirely my own.