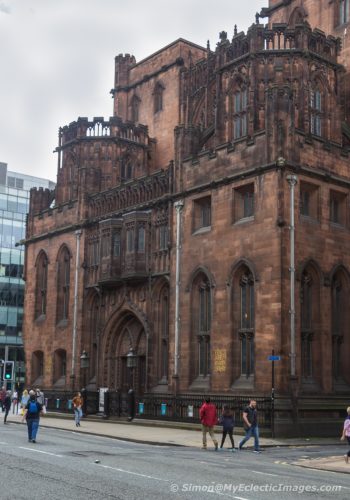 Is It a Castle? Is it a Cathedral? No, It’s a Wife’s Lasting Tribute.

The John Rylands Library may not have looked like a library, but it definitely smelled like one. You know that subtle scent; a combination of books of all ages, and the people who read them. I’m not suggesting that either have a foul odor. On the contrary, I’ve always found the olfactory sensation comforting. But the smell was where the similarity between this 19th century Manchester treasure and a local public library ended.

A Stairwell Leading to the Reading Room (©simon@myeclecticimages.com)

The Victorian Gothic building on Deansgate, one of Manchester’s oldest thoroughfares, appears to be either a castle or cathedral. In fact, the John Rylands Library is home to unique special collections totaling approximately 1.4 million books, manuscripts, letters and documents. Collectively, they are considered to be the largest compilation of its kind in the U.K..

The library was commissioned in 1889 by Enriqueta Rylands, in memory of her late husband. John Rylands had been one of Manchester’s most successful industrialists, and its first millionaire, when he died at age 87 the previous year. This shy, self-made man left an estate amounting to approximately £2.75million, a staggering fortune at the time.

Enriqueta hired architect Basil Champneys to design the library, which would bear her late husband’s name. The library was constructed of Cumbrian sandstone with an exterior of dark red Barbary stone from Penrith in the Lake District. An internal steel framed structure and brick arched flooring completed the building’s shell. It was intentionally designed to resemble a church, which would contain predominantly religious materials. It took 10 years to complete, and has been through four subsequent extensions.

Blending of the Original Structure of the Rylands Library with a Modern Extension (©simon@myeclecticimages.com)

In 1892, Enriqueta purchased 40,000 books, many of which were rare volumes, from Lord Spencer. The purchase, combined with her own books, formed the core of the library’s collection, to which she continued to contribute until her death in 1908. Enriqueta bequeathed her private collections to the library, and £200,000 to insure the John Rylands Library would continue to expand its square footage and precious contents.

We learned the library’s priceless collections included magnificent medieval illuminated manuscripts, examples of early forms of European printing, rare prints and personal papers and letters of literary great, Elizabeth Gaskell and scientific pioneer, John Dalton. Rare treasures such as an early Gutenberg Bible, a 1476 William Caxton edition of Chaucer’s Canterbury Tales, a First edition of Ulysses by James Joyce and the oldest known piece of the New Testament, the St John Fragment, a scrap of Greek papyrus, believed to be over 1,800 years old.

Type Set Up and Ready to Print on the Flat Bed Press (©simon@myeclecticimages.com)

To say the library’s massive collection is varied would be a gross understatement. Subjects include theology, philosophy, all forms of art and science, history, the law and of course, travel, just for starters. Spanning 5,000 years, the collections include materials in 50 languages, written on every imaginable medium. And as if all this isn’t enough, the John Rylands Library was one of the first to start collecting historical family records.

Come on in, the Reading’s Fine

The interior of the John Rylands Library is dressed in varying delicate shades of sand pink ‘Shawk’ stone (from Dalston). Examples of the Magnificent Variegated Stone Work in a Stairwell (©simon@myeclecticimages.com)

Examples of the Magnificent Variegated Stone Work in a Stairwell (©simon@myeclecticimages.com)

Quietly, Simon, Otto and I explored the second-floor main reading room, bathed in light from oriel windows in the reading alcoves and high windows. The room was artfully decorated with two large stained glass windows depicting religious and secular scenes and white marble sculptures of John and Enriqueta Rylands standing on opposite sides. The building also houses the main library, Bible and map rooms, as well as meeting and lecture rooms.

A Stained Glass Window in the Main Reading Room (©simon@myeclecticimages.com)

Closer View of the Stained Glass Window in the Main Reading Room (©simon@myeclecticimages.com)

Unfortunately, we arrived near closing time, so we made our way back out into the roar and bustle of modern Manchester far too soon. Perhaps on a future rainy afternoon, we’ll spend a tranquil hour or two delving into the library’s vast treasury, enjoy a coffee or “cuppa” in the café and wander the rooms and halls of this magnificent building, drinking in the smell emanating from millennia of knowledge.

There is no entrance fee to enjoy the John Rylands Library. Current information on hours and special events is available on the library’s website.