At the Millworks It’s All About Pennsylvania: 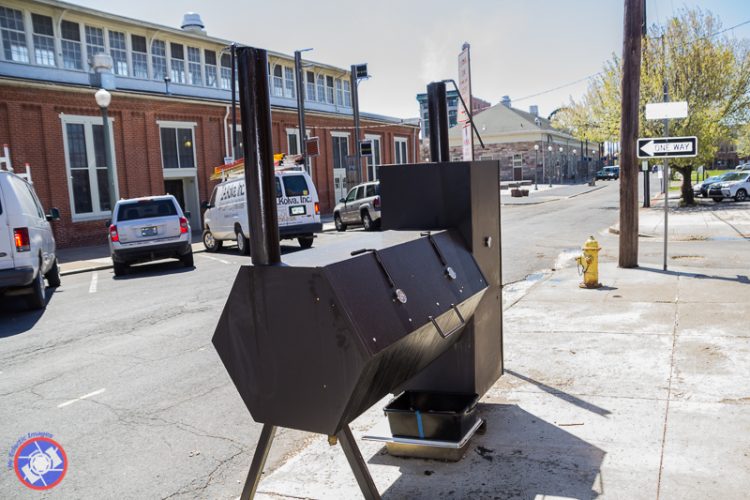 Looking for something more than food for your next meal? Something to feed all your senses? If you happen to be in midtown Harrisburg, PA, you’re in luck. The Millworks has everything you need to satisfy your hunger pangs, as well as your craving for a unique experience.

Simon, Otto and I were steered to the Millworks during a visit to Harrisburg, but we could have found the location simply by following our noses. The aromas wafting from the enormous smoker in front of the restaurant was an olfactory siren song. We couldn’t have resisted the smell of pork and beef being smoked to perfection if we’d tried. And I can assure you we didn’t.

Pork Butts Smoking on the Street Outside the Millworks, Harrisburg, PA (©simon@MyEclecticImages.com)

The Millworks is a 24,000 square foot Structure. It houses a restaurant that seats 150, and serves up locally sourced seasonal farm-to-table dishes. The full service bar offers draft beers from the 2,000 square foot onsite craft brewery, ciders from area producers and impressive selection of spirits and artisan cocktails. The Millworks also has 28 studios on three floors occupied by 31 regional artists, whose creations are on display and available for purchase. Add to all this a stage and sound system for live music, and you have a gourmet recipe for success.

Millworks Operations Manager, Patrick Garrity showed us around before lunch. As we toured the building, Patrick shared with us the history of the property and its various components. He spoke with genuine enthusiasm of the Millworks’ commitment to serving local sustainable food, running an environmentally responsible operation as well as showcasing the best of Pennsylvania through food, art and music.

The Millworks, located in the vibrant Midtown area of Harrisburg, was once known as the Stokes Millworks, a lumber and textile mill. Constructed in the 1930s, the building stood vacant for 13 years following the mill’s closing. Enter real estate developer and entrepreneur Joshua Kesler. He purchased the property, and after extensive renovation, opened the Millworks in 2015.

Joshua Kesler is the single owner of the Millworks, and to my mind, a genius. First he purchased a building that oozed potential. And he purchased it in the Midtown Harrisburg hub, which is undergoing a spectacular Renaissance. The Millworks sits right next door to the Broadway Farmers Market, the oldest such market in the country. If you’re going to serve locally sourced food, you can’t find a better neighbor than one teeming with area growers and producers. Three hundred free secure parking spaces promise stress-free access to such cultural and culinary gems as The Midtown Scholar – an out-of-the-ordinary bookstore, the Susquehanna Arts Museum, a theater showing independent films, a wine bar and of course, the Millworks. It’s always a beautiful day in this neighborhood.

The renovation of the former mill was another stroke of genius. The project, which was still in progress when we visited, utilized the former mill’s original lumber, beams, and anything else that could be repurposed, recycled or rebuilt. First the interior of the building was sandblasted to clean up the mess resulting from years of neglect. When the major portion of the renovations had been completed, 50 per cent of the Millworks had been reconstructed using materials from the original structure.

Patrick pointed out the staircase, which had been assembled from pieces of lumber found in the building, and a piece of original machinery from the lumber mill on the third floor. It had been too cumbersome to move, so it remained in place as a reminder of the building’s history.

The 31 artists who rent studio space at the Millworks create a wide assortment of original pieces: paintings, sculptures, jewelry, pottery, clothing, photography, soaps, candles and more. They come and go on their individual schedules, knowing what they produce will be displayed, and possibly sold, in one of the Millworks three first floor galleries.

A Ground Floor Gallery in the Millworks, Harrisburg, PA (©simon@MyEclecticImages.com)

When you enter the Millworks, you can go directly to a gallery where you will find items for purchase by each of the resident artists. This gallery offers unique art in an affordable price range. The two remaining galleries exhibit the works of one to three of the artists on a rotating basis.

If you wander through the studio areas, you can watch the artists at work. If a studio door is closed, you can still read the bio of the resident artist.

A Row of Artists Studios in the Millworks, Harrisburg, PA (©simon@MyEclecticImages.com)

The Millworks only displays and sells pieces created by its resident artists. The concept of marrying local food, craft beer and art in one historic building is a win-win for everyone involved. In fact, so excited were some of the artists, they signed up to rent studio space before the concrete floors were poured. That’s how much they believed in the project.

The heart of the Millworks is the restaurant. This area is another example of Joshua Kesler’s practicality regarding material costs and his commitment to making the Millworks as green as possible. The tables and many other features were assembled from lumber and other items found in the building at purchase. Beams from the original roof are now part of the bar.

Patrick pointed out the lights over the bar. He told us these had originally illuminated the Broad Street Market, and were nearly 100 years old. Then he showed us a side from an old Pennsylvania railroad car, which added an off-beat note to the restaurant’s décor. We learned the wood-fired oven, which turns out extraordinarily luscious pizzas,, was built with bricks taken from a demolished 1830’s farm house in Perry County.

But if the restaurant is the heart of the Millworks, the smoker in front of the building is the heart of the restaurant. This barbecue behemoth has the capacity to smoke a whole 250 pound pig along with a substantial amount of beef. Hickory wood is used for most of the Millworks smoking needs, but all the bacon is thick cut from pork belly and smoked with cherry wood.

The restaurant features live music by local talent and touring performers after 10 PM. This scheduling is to insure diners can enjoy a relaxing meal and conversation. When it’s show time, the lights go down, and customers can focus on the music.

Before we ordered lunch, the Millworks’ talented Executive Chef, Lance Smith, stopped by our table for a chat. Lance was born and raised in the Harrisburg area, but spent 10 years in Texas. There he learned the finer points of smoking meats while working at a restaurant called Smoke.

Chef Lance with a Tray of Smoked Pork Outside the Millworks Restaurant, Harrisburg, PA (©simon@MyEclecticImages.com)

Everything at the Millworks is fresh and made from scratch. What’s on the menu depends on what’s growing and available from local farms.

A local farmer raises Berkshire hogs for the Millworks. He also provides Lance with the coarsely ground sausage meat he uses in the restaurant.

Patrick recalled the Millworks’ spring 2015 opening. Realizing local tomatoes wouldn’t be available in time, They had canned tomatoes the previous summer in order to keep the tomatoes they served local. Canning and preserving are done on a regular basis for many seasonal items such as peaches and blackberries for jam.

Stock of Canned Produced at the Wood Pile for the Smoker at the Millworks Restaurant, Harrisburg, PA (©simon@MyEclecticImages.com)

And what about our lunch? We shared a thin-crust pizza topped with sauce, smoked beef, sausage, bacon and cheeses. The flavors and textures combined to make the experience outstanding. The pizza was so loaded we had to use a knife and fork to the very end of the slice. The distinctive smoked flavor of the meats took my favorite comfort food to a higher plane.

The pizza was quite substantial, but when Lance sent us a small sampler plate, we rose to the occasion. Our treat from the chef consisted of fork-tender, smokey barbecued pork topped with cilantro and a Texas style tomato sauce. It had a little sweetness and a medium-size kick. The combination was like love and marriage. The pork was accompanied by pickled beets with caraway and carrots with a tiny, tasty kick. There was also a creamy coleslaw and thick cut bacon. All were delicious.

A recent chat with Patrick, and a visit to the Millworks website, indicated much has changed since our stay in Harrisburg in March, 2016. For one thing, the rooftop Biergarten is now open for business, serving beer, wine, cocktails and a limited menu. This outdoor oasis seats 165 in a casual atmosphere where customers can enjoy the Millworks’ tasty offerings while appreciating a panoramic view of the Midtown Harrisburg area.

The restaurant’s seating has expanded since our last visit, and Lance has added some new, innovative items to the popular standards on the menu. For example, the filling used in the chicken pot pie has been stuffed into ravioli, for an Italian twist on a Pennsylvania classic.

I also learned that in addition to a slew of state and local awards, including one for Joshua Kesler for 2015 Entrepreneur of the Year from the Harrisburg Regional Chamber and CREDC, The Millworks recently received the Open-Table-Diners-Choice-Award–Top 100 Hot Spot Restaurants in America. And as the Millworks continues to refine its menu, craft beers and community presence, more prestigious awards are no doubt on the horizon.

Some time in the not-to-distant future, we will return to Harrisburg, and when we do, we will once again treat our senses to an hour or two at the Millworks. The food, art and friendly service, not to mention the promise of a delicious meal emanating from the smoker, are calling out to us. I don’t know about Simon, but the first thing on my agenda will be to sip one of the Millworks’ frosty craft beers at the Rooftop Biergarten. Cheers!

Do you have a favorite restaurant that is more than a restaurant? If you do, please don’t keep it a secret. Share your fabulous find in the comments.

The Millworks is open:

The Millworks can accommodate small private events. The room has the capacity to seat 40 guests.

The entire first floor of the Millworks is wheelchair accessible, however, there is no elevator to the two upper floors and the Rooftop Biergarten.

Disclaimer: While in Pennsylvania, we were generously hosted by Visit Hershey-Harrisburg, however, all opinions are, as always, entirely my own.