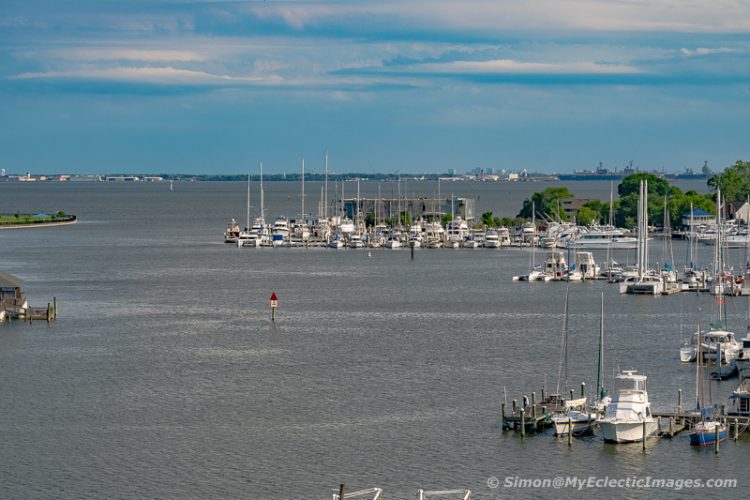 A Leisurely Introduction to the Charms of Hampton, Virginia.

Hampton, Virginia is very much like your classic Southern lady: a combination of modern style and traditional values with a complicated, and sometimes dark, past. Once aware of her enigmatic presence, you’ll want to make her acquaintance. A three-hour harbor tour aboard the Miss Hampton II offers an excellent introduction to this Chesapeake charmer.

Loading Passengers on the Miss Hampton II at the Town Dock in Hampton (©simon@myeclecticimages.com)

A warm, sunny day in May, 2018 was our opportunity to meet the oldest continuously occupied English settlement in the United States. Hey, I didn’t say Hampton was a young Southern lady. In fact, she’s more than 400 years old. So there was a lot to learn.

As Miss Hampton II made her way up the Hampton River into Hampton Roads Harbor, Simon, Otto and I soaked up the fine afternoon. on her deck as the historic and modern structures of Hampton seemed to glide by. In fact, we were the ones moving as Jim, our professional tour guide, pointed out significant buildings and sites. His narrative was informative and entertaining. As he recounted tales from the past and clued us in on things to do in Hampton, we began to understand the long journey the lady had taken in order to arrive in the present to stand poised on the threshold of a bright future.

Hampton from the Water

The Miss Hampton II pulled away from her berth on Historic Downtown Hampton’s waterfront promptly at 11:00am. Motoring out on the Hampton River, we caught site of the structure housing the Hampton Carousel, one of only 70 antique wooden merry-go-rounds still in operation in the U.S, and Hampton Air and Space Center. We then learned that this Virginia town had been the original location for NASA’s headquarters.

The Old Fish Processing Plant Against a Backdrop of the Air and Space Museum and the Hampton Carousel (©simon@myeclecticimages.com)

Jim explained how Hampton might have become the first British settlement in the New World, had it not been for her saltwater river, the first three ships sent from England to colonize the area continued in search of fresh water and landed at what became Jamestown. During a particularly harsh winter, Jamestown was evacuated for several days. Thus making Hampton the oldest continuous English speaking settlement.

Hampton University campus then came into view. The large white manor-house and enormous magnolias of this former plantation stood as a reminder of the university’s beginnings. The property had been purchased by General Samuel Chapman Armstrong following the Civil War. He transformed it into a school for former enslaved and Native American men. The university has the distinction of being home to the oldest African American museum in the U.S with an impressive collection of fine and contemporary art and artifacts.

The Clock Tower and Buildings of Hampton University Seen from the Miss Hampton II (©simon@myeclecticimages.com)

Passing Blackbeard’s Point, we could picture the pirate’s severed head, which following his capture, had been impaled on a pole. This was intended to serve as a warning to others to take their pirating business elsewhere. How well this worked is up for debate. Hampton hosts an annual Blackbeard Festival, and plastic sword-wealding pirates of all ages overrun the town.

Before entering Naval Station Norfolk, amid sightings of white egrets and dolphins, Jim recounted the Battle of the Ironclads. This inconclusive Civil War confrontation between the Monitor & Merrimack changed naval warfare forever.

Hampton Roads Harbor is the location of the largest navy base in the world. The land portion measures approximately 680 acres and is headquarters for the Atlantic Fleet and a NATO base.

You never know what you will see as the Miss Hampton II cruises by, but during our cruise we gaped at two mammoth 1,096 foot long nuclear aircraft carriers with a capacity of 5,000 personnel.

Along with the big guys were replenishment ships, destroyers, cruisers with anti-aircraft, anti-submarine and other defensive and offensive capabilities, ships used to lay fiberoptic cables, attack submarines and an oil tanker converted into a hospital ship. These floating behemoths dwarfed a seven-story building onshore.

Naval Station Norfolk is the home port of the repaired USS Cole. The Cole was damaged in 2000 when it was rammed by a small boat laden with explosives. Thoughts of the 17 sailors killed that day reminded us of the perils faced by our service men and women.

One of the many highlights of a cruise on Miss Hampton II is a 45-minute stop and tour of Fort Wool. The fort is located on a large manmade island with an enormous flag to welcome visitors.

Entrance to Fort Wool from the Dock (©simon@myeclecticimages.com)

Following the War of 1812, it became obvious that Fort Monroe alone could not protect the coast from enemy ships entering the harbor. The solution? Pick a strategically sound location and install an island.

Dredging of the harbor and building of the island began in 1819. It was partially constructed under the direction of Lt. Robert E. Lee during his early U.S. Army career. Ironically, Forts Monroe and Wool played an active role during the Civil War, protecting the entrance to Hampton Roads harbor, and were occupied by Union forces throughout the four-year conflict.

The island was built to a height of approximately 10 feet above water level using rocks. Unfortunately, it began to sink, and had to be fortified by the addition of more rocks around the perimeter. The island still sinks an eighth of an inch a year.

What’s left of the fort is still standing, and we were able to climb to the top to enjoy the view. The island was quiet except for the sounds of boisterous birds and the occasional jet flying overhead.

Two hundred stone cutters had worked on constructing Fort Wool out of solid granite. Jim showed me a hole in the top of a stone where the builders would have fitted a spike. The spike would have aligned with a similar hole in the bottom of another stone. In other words, no mortar was used. It was like an early form of Lego.

Fort Wool closed in 1957, and the island is now a city park. Sadly, the buildings remaining on the island have fallen victim to fire, neglect and vandalism. Unless they undergo major reconstruction and renovation in the near future, their decay will pass the point of no return.

On our return run, we passed Fort Monroe, the oldest continuous fort in the U.S. until its closure in 2011. It is now open to the public, and seeing this historic site from the water convinced us we needed to pay it a visit.

The fort’s long history includes a precedent that was established in May of 1861. Three escaped slaves were granted refuge as “contraband of war”, and thousands more followed. Fort Monroe became known as “Freedom’s Fortress.”.

Jim pointed out the former officers’ club, which is now a restaurant, an RV camp with a beach area and the Casemate Museum.

Also located at the fort is the Old Point Comfort Lighthouse, built in 1802 and a pet cemetery for people the who once lived at Fort Monroe.

Much has changed since Fort Monroe’s closure. You can find houses for rent and an independent living facility for seniors that had once been a hotel.

As we left Fort Monroe behind, we saw an Osprey (the plane not the bird) take off. The military presence is strong and constant, and is an integral part of the life of Hampton, Virginia.

The Miss Hampton II returned to port all too soon, and we disembarked. The experience had been like floating alongside a lavish buffet table. The variety and abundance of Hampton’s offerings were compelling enough to entice us to visit some of her sites from a landward perspective. Should you ever find yourself in Hampton – and I hope you do – take a cruise aboard the Miss Hampton II. Then take your time getting to know this lovely Southern lady.

If you’ve taken a harbor cruise in the past, we’d love to hear about in the comments.

Below are the ticket prices for 2018. Be sure to visit the website for updates.

To get the most out of your visit to Hampton, consider purchasing a Sea to Stars Ticket. The price includes a Miss Hampton II Harbor Cruise, admissions to the Virginia Air & Space Center and the 3-D Digital IMAX®, as well as the Hampton History Museum and the Hampton Carousel.

Our visit to Hampton, Virginia was generously hosted by Hampton CVB. However, all opinions, as always, are entirely my own.