Oh, How We Wish Those Boys Were Real

The term, “long road trip,” is relative. For some, it means anything over 50 miles. For others, it’s anything over 500 miles. For Simon and me, it’s 300 miles or more, because we can read an audio book – or a good part of one – on a two-way journey. But on trips of 1,000 miles each way, not just any book will do. That’s why we take Mitch Rapp and Scot Harvath with us on those long drives.

Who are these guys? They were born of the fertile imaginations of the late Vince Flynn and very much alive Brad Thor respectively. Each is a larger-than-life hero in his own series of best selling thriller novels, and their high-tech ass-kicking cloak and dagger antics make the miles go by fast. We try to keep stops to a minimum, and as cozy companions as Simon and I may be, there’s only so much we can talk about on a 10-hour drive.

Although we often read individual books, having the anticipation of the next book in a series when we hit the road makes the journey seem less daunting. Also, not having to figure out what we’re going to read at the last minute before a road trip is a plus. We drove our way through 24 of Sue Grafton’s Kinsey Millhone Alphabet Series, and are awaiting “Y is for Yesterday”, scheduled to come out in August, 2017. We get attached to the characters, try to second guess the outcome of the plots and are hopelessly hooked on having familiarity with a fresh new story in every book.

Vince Flynn tragically passed away in 2013, but he left us 13 Mitch Rapp books to remind us that sometimes you have to be a bad-ass in order to do a good job.

The first Vince Flynn book I read, “Term Limits”, didn’t make any mention of Rapp. It wasn’t even a road read. The protagonists are a group of no-nonsense ex-military heroes who don’t just break the rules, they vaporize them.

This story draws clear lines between fantasy and reality. In reality, I could never condone the actions of these men, no matter how right they were. But my fantasy self was cheering them on all the way. I suggest you read “Term Limits” if you plan to dive into the Mitch Rapp books. It sets the tone for what’s to come, and the characters appear as Rapp’s go-to guys in some of the novels.

If you want to read the 13 books in chronological order, keep in mind they weren’t written that way. Flynn wrote “American Assassin” and Kill Shot”, which explore Rapp’s past, and how he evolved into a counter terrorism killing machine, somewhere in the middle of the series. So you may want to begin with these two.

Mitch Rapp does things his own way, and he does them so effectively, most of the powers that be either facilitate him, or look the other way. Rapp has neither time nor patience for petty government bureaucrats, bleeding hearts or political correctness. But whatever your political leanings, you can’t help immersing yourself in the non-stop suspense, surprise plot twists and the characteristics that make Rapp so likable. He’s loyal, patriotic and he makes every effort to keep innocent civilians out of the line of fire.

Now that Flynn is gone, suspense/thriller author, Kyle Mills has written three Mitch Rapp novels: “The Survivor”, based on Flynn’s first chapter notes, “Order to Kill” and “Enemy of the State”. The latter is scheduled for release in September, 2017.

We have the first two books ready to go, and a road trip coinciding with this post to see if Kyle Mills has successfully perpetuated the Vince Flynn  magic. I’ll let you know if Mitch is a wrap. 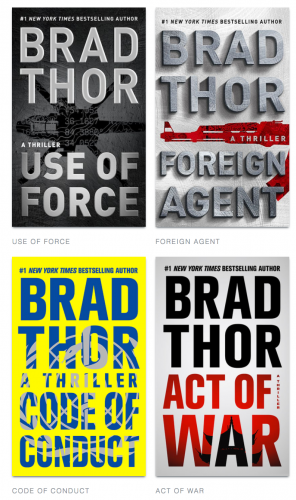 While Mitch Rapp was busy dispatching bad guys and unraveling sinister plots against the free world, a slightly younger Scot Harvath was heading up the President’s personal Secret Service detail, and about to be come a dispatcher of bad guys and unraveler of sinister plots in his own right. With “Lions of Lucern”, author, Brad Thor, unwittingly created a character that would all too soon be called upon to temporarily fill the gap left by the loss of Vince Flynn.

Harvath is a lot like Rapp in some ways. This eased the transition from one American hero to another. But Harvath has his own personality, which stands up well. In other words, Harvath is definitely not a cheap replica of Rapp. Thor’s plots are just as gripping as Flynn’s, but they seem to be even more convoluted and scary because of their plausibility. Here is how the two characters and series are similar to and different from each other.

Obviously, there are more similarities than differences, but the two men have their individual personalities. Sadly, despite some human shortcomings, the most striking similarity is that both Mitch Rapp and Scot Harvath are too damn good to be real.