The Magical Island of Nasslingen: 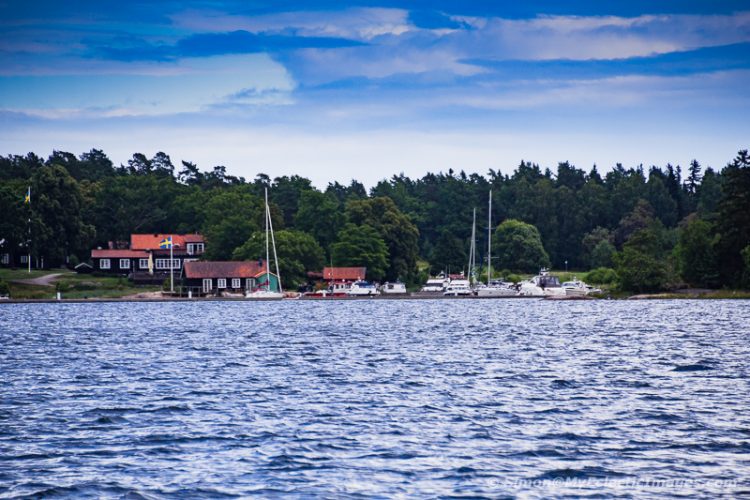 Nature’s Gift to the Stockholm Archipelago

Nine travel bloggers who had never met before, on a boat to Nasslingen, a small island they’d never heard of, with a yellow Lab who never cared where he was. That was how July 12, 2016 began. By the time it ended in the early hours of the following morning, the strangers were soaking in a hot tub, chatting and laughing like old friends. They had fallen under the spell of Nasslingen. And the dog? He still didn’t care where he was.

Leaving the Stockholm Harbor Behind as We Head for Nasslingen (©simon@myeclecticimages.com)

Simon, Otto and I were in Stockholm for the TBEX (Travel Bloggers Expo) Europe 2016 Conference. We had been fortunate to have been selected to participate in a pre-conference familiarization trip to learn about Sweden’s military history. We stopped at fortresses and other sites before and after our overnight stay on Nasslingen. Whether by chance or design, this part of the trip turned out to be a welcoming oasis of calm amid the fascinating information overload on military brilliance and bungling.

As soon as we stepped onto Nasslingen, it felt as if we had been transported to another world. Except for the sound of birds and the gentle breeze caressing the tree branches, it was blissfully quiet. A calm settled over me as the sun warmed me inside and out. We soon learned this sense of well-being was due to a collaborative effort between Mother Nature and our host, Johan Pedersén.

It didn’t go entirely like the plot of the 90’s romantic comedy, “When Harry Met Sally”, but there were some striking similarities. For one thing, Johan and Nasslingen didn’t exactly hit it off. He told us the story on the boat out to our first historic site, Vaxholm Fortress.

When Johan was in his mid-twenties, he spent an evening on Nasslingen drinking beer and courting a young lady. The results were disappointing for our young Romeo, so Johan decided the island was a dud to be avoided.

Nasslingen had been used as a farm – remnants of a windmill can still be seen – until 1945. It eventually became a summer retreat for the builders union. This lasted until 2011, when it was decided the retreat was losing too much money, and Nasslingen was put up for sale.

Johan owns one of Stockholm’s largest marinas, located on a nearby island. To some, it seemed only natural that he consider buying Nasslingen. But Johan still held a grudge. It wasn’t until 2012, when a visiting friend from London persuaded him to at least have a look.

Now, the one time Johan had seen Nasslingen was in the dark. The moment he set foot on the island in broad daylight, something changed. “It just hit me”, Johan recalled, “and I haven’t been able to think about anything else since then. It’s a magical place.”

In May, 2014, Johan Pedersén and Virva Kuusela became owners of Nasslingen. Both had backgrounds in architecture, and they made it their goal to work with the island’s natural beauty to make those magical attributes even more powerful

Making Paradise Accessible to Everyone

Johan’s pride in Nasslingen was evident. He and Christine Forsell, who is in charge of marketing, showed us around, pointing out the extensive renovations already completed and in progress.

Cabins of all shapes and sizes dotted the island. Although fully functional, they are in the process of being updated on the inside. The 14- room, 2-suite hotel was not quite complete, but will be wheelchair accessible with ramps, elevators and appropriately sized doorways and bathrooms.

We walked around the 100 acre – two thirds woodland and one third open space – island, breathing in the fresh air. As we we walked the path that took us in a full circle, we noticed how smooth it was. A wheelchair would have no trouble navigating the terrain. Also, exercise stations along the way invited us to add a bit more challenge to our walk.

“We want to make this island accessible to everyone,” Christine emphasized. Apparently, the needs of travelers with disabilities are not always taken into consideration on many of the other islands. But on Nasslingen, all can benefit from the magic. Johan and his team have seen to that.

One of the Exercise Areas Along the Walking Trail that Circles the Island (©simon@myeclecticimages.com)

Simon, Otto and I had spent the two months prior to our arrival in Stockholm traveling through Spain, Italy, France and England. To say we were fried would be an understatement. If anyone needed what Nasslingen had to offer, it was us.

Our accommodation was a small cabin with an ensuite bedroom. It was clean, comfortable, and we slept like rocks once we managed to drag ourselves out of the hot tub.

We ate our meals at Svarta Malin, Nasslingen’s restaurant. Like every other structure on the island, there is a generous view of the sparkling water. The view, and spectacular sunsets were a fitting accompaniment to the artfully prepared and over-the-top delicious food.

The Building Housing Reception and the Restaurant (©simon@myeclecticimages.com)

The restaurant has an impressively stocked bar, and seats approximately 90 inside. The expansive outdoor area can seat over a hundred.

Ingredients from neighboring islands in the archipelago – ice cream from Väddö, cheese from Rindö, ketchup from Resarö – are used to prepare tantalizing breakfasts, lunches and dinners. Wild garlic grows in abundance on the island, as well as blueberries and several varieties of chanteral mushrooms. Freshness and variety make dining at Svarta Malin a true pleasure.

We had part of the afternoon to ourselves to explore the island and enjoy the sauna and hot tub. Simon and some of the others went for the sauna, and Otto and I went for a nap.

After dinner, we were invited to help ourselves to the beverages in the refrigerator in the lounge in the sauna and hot tub area. There was a warm fire burning, fresh towels and robes as well as plenty of cold Persecco. Now, who can resist that. Surely not I.

The Lounge with the Wood Burning Stove (©simon@myeclecticimages.com)

Bearing our beverage of choice, we made our way to the hot tub, where the hours flew by in lively conversation. Because the mid-summer sun stays just below the horizon after sunset, the sky never gets completely dark. This made it seem as though it was earlier than it was. But by midnight, Otto wasn’t the only one who didn’t care.

Relaxing in the Hot Tub(©simon@myeclecticimages.com)

“I want people to find this hidden gem in the archipelago,” Christine told me the following morning. “Unfortunately, most people only learn about the four big islands. Staying on Nasslingen is almost like having your own private island.”

Christine’s description was accurate. At least it was for me. There were no cars: only two electric golf carts. Animals or plants not native to the island will not be introduced. The birds of prey, raccoons and deer will not have to deal with boars from other islands. Nor will the people-shy seals.

Sweden is an amazing country: clean, modern and friendly. But I wouldn’t consider returning without a visit to the magical island of Nasslingen.

Disclaimer: Our visit to Nasslingen was hosted by Visit Stockholm and Nasslingen. However, all opinions, as always, are entirely my own.

Do you have a special place where you can relax and recharge? Tell us about it in the comments.