The National Civil War Museum Tells it Like it Was: 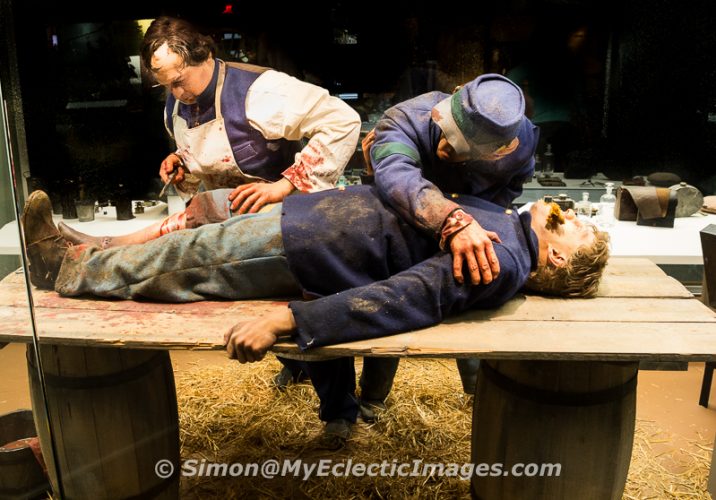 Experience Both Sides of the Bloody Conflict that Nearly Shattered a Nation.

For many, it’s easy to pass judgement regarding the right and wrong of the American Civil War. And, to some degree, I too am guilty of this mindset. The people I admire most when it comes to this highly charged subject, are those who can objectively present the facts without diminishing the extremity of emotions that burned before, during and after the most horrific four years in the history of the United States. Such individuals can be found among the founders and stewards of the National Civil War Museum in Pennsylvania’s capital city of Harrisburg.

The National Civil War Museum is housed in a two-story brick building that affords a spectacular view encompassing the river valley and four counties from its second-floor observatory.

This is where you begin your self-guided tour, and work your way down to the ground floor, through the unavoidable gift shop and out. But between the observatory and gift shop you pass through a series of exhibits that take you, in chronological order from the pre-war years of 1850, through the war itself, 1861-1865 and up to 1876. For this tour, you need an open mind, a strong stomach and a desire to learn more than you think you already know about this dark era in American history.

Your journey through the museum is straightforward with printed information and sensors that activate recorded story tellers, music of the period, as well as the painful sounds of battle and unspeakable misery. On our journey, we were especially fortunate to be guided by Kate McDermott, Assistant Director of Sales/Marketing for the museum. She offered additional insights, vivid descriptions of the exhibits and background information on the museum itself.

We began with the causes leading up to the Civil War. Diametrically opposed views on slavery, a clash of cultures and agriculture vs industry formed an ever-deepening divide between North and South.

Slaves were the backbone of the South’s agricultural economy, and plantation owners had no intention of giving them up without a fight. A symbol of the harsh existence of a Southern slave was a four-pronged slave collar. The vertical prongs, approximately 15 inches long, made escape virtually impossible because of the spikes invariably catching in tree branches. The collar also made it impossible to lie down, and was regularly used as a particularly cruel form of punishment.

Also heartrending was a display of a slave auction showing men separating a mother from her son.

On April 12,1861, Confederate forces fired on Fort Sumter in South Carolina, and the war was on. For the next four-and-a-half years, a savage conflict raged throughout the land that would leave over 600,000 soldiers dead and the South in ruins.

I asked Kate what was happening in Harrisburg during the war. She explained that although the city never became a battlefield, its location would have been the next stop after Gettysburg – only 38 miles away – had Robert E. Lee’s army not been forced to retreat. Not only was Harrisburg Pennsylvania’s capital, which would have been an important moral victory it would have also given Lee’s army access to the railroad lines. Loss of this critical advantage would have been nothing short of disastrous for the Union.

Throughout the war years, Camp Curtin, – its location can also be seen from the observatory – was the Union’s largest camp. Blue uniforms were to be seen everywhere in Harrisburg until the end of the war.

As we followed the timeline of the Civil War, we saw artifacts that had belonged to Lee, Stonewall Jackson and other well-known players in the dark drama that was the Civil War: Lee’s bible, the pen used to sign John Brown’s death warrant, a lock of hair from Jackson’s horse. There were even more every-day items once owned by hundreds of thousands of members of both the military and civilian population.

An exhibit depicting the lives of Civil War women had dresses with tiny waists worn by women who made flags and banners. Those who lost their slaves and their men as well simply had to learn to do it all or die.

There were scenes of encampments, battle charges and, the most disturbing, a replica of a field hospital. In this scene, a doctor was preparing to amputate a man’s leg, the quick, dirty, and at that time, the only way to avoid gangrene. Unsanitary conditions led to infection, and even more men lost their lives.

Anesthesia was in its infancy, and not always available on the battlefield. In the display, the man about to lose his leg is shown biting down on a rope. This scene is as real as possible without someone actually having his leg cut off. It hasn’t been sanitized or sugar coated in order to spare the squeamish. This is how it was, and this is how it must be shown.

In one area, we picked up ear pieces and were able to listen to songs that were popular during the war. Musical instruments of the day were also on display.

A large diorama featuring an authentic cannon, and what is thought to have been the last remaining ambulance used during the war, were just two of the many solemn reminders of what had taken place.

One of the most arresting features of the last stop on our tour was a life-size portrait of Abraham Lincoln, painted by John Buxton. There was also a mask made from the face of the doomed president. The portrait was stunning, but the mask, which had been in contact with Abraham Lincoln’s face, was truly haunting.

In one area of the exhibit, we could ask pre-scripted questions of Honest Abe. Upon request, he is programed to answer questions about his favorite food, or launch into one of his tales. I wanted to ask him questions like: Did you feel hopelessness at any time during the war? Did the carnage and destruction ever make you regret your choices? Would you do it all again?” But I didn’t think he was programed for such questions. No one will really know what went through this great man’s mind. All I know is I never would have wanted to be in his shoes.

The National Civil War Museum is one of the largest facilities of its kind in the world, and one of only eight Pennsylvania museums affiliated with the Smithsonian Institution in Washington, DC. Its primary goal is to accurately present a complete and unbiased history of the American Civil war for historians, students and anyone interested in looking at the big picture.

On February 12, 2001, Abraham Lincoln’s birthday, the National Civil War Museum opened its doors to the public for the first time. This $32 million project had long been the vision – some call it an obsession – of Harrisburg Mayor Stephen R. Reed, a Civil War enthusiast and the city’s mayor for 24 years.

Most of the museum’s approximately 24,000 artifacts and documents were collected between 1994 and 1999 during Reed’s time in office.

On display are 850 of the museum’s mammoth collection that can be viewed in the galleries.  The rest are in storage, awaiting future exhibits,

A recent update of the museum’s labeling system will enable staff to rotate items. This will protect the entire collection from the damaging affects of light, and give visitors even more reasons to return in order to see what’s new.

Bronze Statue in the Courtyard of the National Civil War Museum (©simon@myeclecticimages.com)

Along with the permanent galleries, the Civil War Museum features special exhibits. These have included subjects such as the lives of children during the war, the Buffalo Soldiers (black men who fought on the side of the Union) and “Vice and Virtue” outlining the temptations of being away from home and at war.

We had a little over an hour in the National Civil War Museum, which was more than enough to make me want to return and spend several hours among the artifacts, sound tracks and one of my heroes, Abraham Lincoln. It had been the worst of all possible times, but the war once and for all resolved an issue that should never have been allowed to stand., Still, I have to ask myself, in the more than 150 years since the American Civil War ended, how much have we really learned?

Have you ever been deeply affected by a period in history such as the American Civil war? If so, please tell us about it in the comments.

A Reminder of the “United” States (©simon@myeclecticimages.com)

Disclaimer: While in Pennsylvania, we were generously hosted by Visit Hershey-Harrisburg, however, all opinions are, as always, entirely my own.