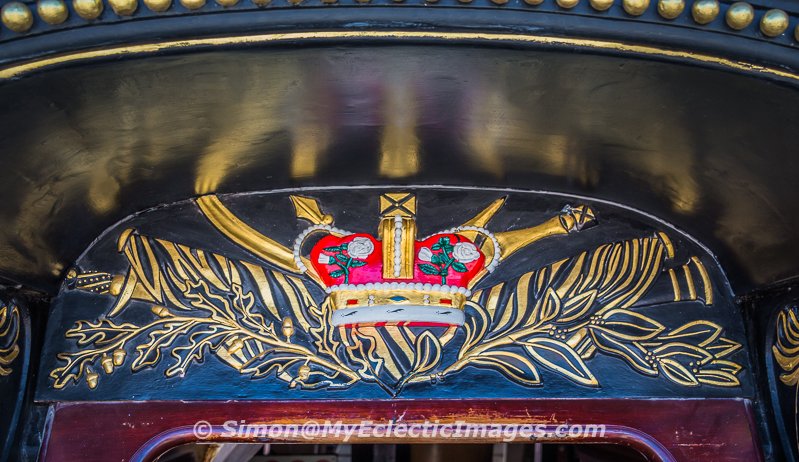 The lady was undergoing yet another facelift. The ravages of time were still evident from the many beatings she had taken. But we had to admit, the old girl looked remarkably good considering she was over 250 years old. The HMS Victory, the flagship Vice-Admiral Lord Horatio Nelson sailed into battle at Trafalgar in 1805, was a magnificent sight to behold.

Simon, Otto and I were spending an entire day at Portsmouth Historic Dockyard, and the excitement of boarding the ship that played such a pivotal role in British naval history didn’t hit home until we were standing on Victory’s deck. We were free to walk about above and below, envisioning the day-to-day lives of the 800 sailors who lived, fought and – sadly for some – died on this ship.

Part of the Gun Deck on HMS Victory (©simon@myeclecticimages.com)

Knowledgable guides were available to point out relevant artifacts, answer questions and provide historical background. We learned that the day room of Sir Thomas Hardy, Victory’s captain at Trafalgar, was located where he had easy access to the quarter deck so he could easily reach the scene of the action.

Captain Hardy, Admiral Nelson and Victory’s officers had their own digs, but the remaining sailors slept in hammocks hung near their stations, which for some were between the guns.

Shipboard life for early 19th century British sailors was uncomfortable to say the least. When nature called, they made their way to the bow, where they could relieve themselves over one of six holes designed to send their bodily excretions directly down to Davy Jones’ locker. I tried not to be amused at the mental image of someone performing this function during a storm. In this situation, I hoped the lads had a plan B.

Considering the number of men aboard Victory, the ship’s galley seemed to be incredibly small, even though the sailors ate in shifts. Men who were physically unable to go into combat were assigned to this station, whether they knew how to cook or not.

Upon entering Nelson’s quarters, it was our good fortune to have met a guide who not only understood her subject, but made every effort to enable me to derive the most from my time in these cabins.

We began in the admiral’s private dining room. Although the carpet was relatively new, it had been produced in a pattern true to the style of the 1790s. Our guide showed us how all the furniture was hinged so it could be folded and stored down below during battle.

The carpet in the day room was at least 200 years old, but wasn’t from Victory. However, the round table  and desk belonged to Nelson himself.

The desk was strictly hands-off, but I was invited to touch the smooth, cool surface of the table. I did so with reverence for the remarkable man who had owned and used it.

Nelson Desk and Table in the Day Room Aboard HMS Victory (©simon@myeclecticimages.com)

I asked about the wood, and was told the table was made of beach. Apparently, the French Navy was particularly fond of mahogany, which shattered upon impact; of which there was a lot in those days. Not so with beach, or the oak from which Victory had been built.

A Beech Table with Navigation Charts Aboard HMS Victory (©simon@myeclecticimages.com)

On the port side was what was known back in the day as a ‘seat of ease’. This was a single-hole version of the six at the bow. One of the most coveted privileges of being an officer may have been the ability to ‘sit’ in complete privacy and comparative comfort.

Seat of Ease in the Port Stern Quadrant (©simon@myeclecticimages.com)

For most, a hammock was the bed of choice, especially in stormy seas, but not for Nelson. Because he had one arm, Nelson slept on a flat bed, enabling him to easily get in and out.

On his wall hung a portrait of lady Emma Hamilton, Nelson’s mistress. As well as one of Emma with their daughter, Horatia. Nelson was married, but was hopelessly in love with Emma.

HMS Victory was designed by Sir Thomas Slade, whose vision took six years to come to fruition. Completed in 1765 at Chatham Dockyard in Kent. Victory saw considerable action before the Battle of Trafalgar, and went through alternating periods of repurposing and neglect during the subsequent decades.

In 1922, no longer fit to float, HMS Victory was moved to her permanent address at Portsmouth Historic Dockyard’s No 2. Today, HMS Victory serves her country as a museum ship, where 400,000 visitors annually walk her decks, explore her interior and relive the triumph and tragedy of the Battle of Trafalgar.

We saw the location on the deck where Nelson was mortally wounded, a bronze plaque marking the spot. He was carried below where he languished for three hours before succumbing to his injuries. Nelson had two requests. The first was to know the course of the battle. Captain Hardy was able to assure the dying admiral that the British fleet had carried the day.

Bronze Plaque Marking the Spot on Deck Where Nelson Was Mortally Wounded (©simon@myeclecticimages.com)

Marking the Spot on Board HMS Victory Where Nelson Died (©simon@myeclecticimages.com)

Nelson’s second request was to not be buried at sea. This one created a problem, because of the time it would take for the severely damaged Victory, who could not run on her own steam and had to be towed, to reach England. The solution? Nelson’s body was placed inside a barrel, which was then filled with brandy. The admiral arrived home perfectly preserved, and was buried in the soil of his homeland.

HMS Victory is the oldest serving warship still in commission worldwide. As befitting a lady of such stature, she has her own Captain, officers and crew.

With ongoing restoration and renovation, Victory is slowly being returned to her Georgian appearance. Recently painted in her original colors of black and yellow, she is now dressed according to her age.

Much care is being taken to balance authenticity with practicality. After all, the lady is fragile. The guns we saw were not even close to the original weapons she carried. They were  lightweight replicas placed aboard her to represent the way they looked without adding unnecessary weight that would further damage the ship.

As part of the renovation, the poop deck was opened to the public. Fortunately, Otto didn’t mistake the name for an invitation. From this vantage point, we had a stunning view of the dockyard.

View of the Deck of HMS Victory from the Poop Deck (©simon@myeclecticimages.com)

I would have liked to have stayed a while longer, to further explore the ship,. After all,. There’s  so much for me to learn from women even older than I.

HMS Victory is one of many fascinating attractions to be experienced at Portsmouth Historic Dockyard: museum ships, a harbor tour, boat-building shop, the Museum of the Royal Navy and more. Based on our visit, I highly recommend you spend an entire day to explore British naval history at its finest. Information on times and tickets can be found on the dockyard’s website. (Insert http://www.historicdockyard.co.uk)

Disclaimer: Our day at Portsmouth Historical Dockyard, which included the visit to HMS Victory, was complementary. However, all opinions, as always, are entirely my own.

Do you have a favorite historic military site? Let us know in the comments.