An Award-Winning Eatery Serves Up Traditional favorites and Mediterranean  Delights

Dining at Fairfield Harbour Food and Spirits is like treating all your senses to a meal out.

The walls are washed in a soft blue, which compliments the view of boats on the water and at the docks at Northwest Creek Marina, located approximately 12 miles southeast of the historic city of New Bern, North Carolina. The tables and chairs are unpretentious, but comfortable. Tantalizing aromas welcome you even before you walk in. The sounds of conversation and soft music assure your ears that they have nothing to fear. But it will be your taste buds that will really thank you.

The menu is varied without being overwhelming. My first meal at Fairfield Harbour Food and Spirits was lunch with a friend. We both had the Gyros with home made potato chips. The thinly sliced meat was tender and juicy, with subtle flavors of lemon, oregano and other traditional Greek seasonings. This was nothing like the dried, over-cooked stuff you sometimes find when you order from folks who have no clue what they’re doing. The chips were crisp and not the slightest bit greasy, so they couldn’t be bad for me. Well, that’s my story, and I’m sticking to it!

While working on a story about FHFS for The County Compass, I  had the pleasure of interviewing Roy Simmonds, who owns. the restaurant along with husband and wife, Chris Manoudakis and Tina Scire. I asked him if we could get some pictures of the food, especially the Greek specialties. He said that they would set something up for us after the dinner crowd. Meanwhile, he suggested that we have dinner there that night.

This was the first time we had enjoyed dinner at FHJFS, but definitely not the last. Simon had the pork souvlaki, which was fork-tender and deliciously consistent with the restaurant’s reputation for quality and flavor. Since I can’t get enough of their Gyros, that’s what I chose.

Evolution of a Really Good Thing

On August 28, 2013, culinary standards in the New Bern area rose to a new level of “yum” with the opening of FHFS, a casual dining experience that offered something for everyone: reasonable prices, generous portions, an outdoor deck with a pleasant view, a children’s menu, breakfast on the weekends and a lot more. Oh, and did I mention that the food is superb?

Open less than a year, FHFS may have been the new kid on the block, but this didn’t prevent the ownership team  from making a spectacular showing at the 11th Annual Taste of Coastal Carolina at the New Bern Riverfront Convention Center on March 11, 2014. Generous samples of some of their Greek specialties were offered to hungry attendees, who showed their appreciation by voting for FHFS to take home the Golden Peppermill trophy for best overall restaurant, a blue ribbon for best new participant and a second-place award for presentation.

For Roy, Chris and Tina, this was a dream come true, and the culmination of years of hard work and perfecting their skills.

The talented trio got together several years ago when Roy, a New York native, opened a restaurant in Alabama for his boss of 14 years, who owned numerous diners along the east coast.

There was an immediate synergy. “We hit it off,” Roy recalled, “because we had the same work ethic.”

Chris, on the other hand, had grown up in the family restaurant in Florida. “By the time I was eight, I was bussing tables,“ he said. “I worked after school and on weekends.”

Several years later, the three found themselves in a position to realize their dream of owning their own restaurant, working for themselves and making a life for their families. In fact, the opportunity arrived so suddenly that they had a matter of days to decide if they were going to leave everything behind in Atlanta and start a new restaurant and life in the New Bern area. “We were playing Russian roulette,” Roy said.

The Fabulous Greek Flavors of FHFS

Although the menu offers a feast of options from which to choose, I can’t help gravitating to the bright, yet subtle flavors of the Greek offerings. Here is just a sampling of what you’ll find 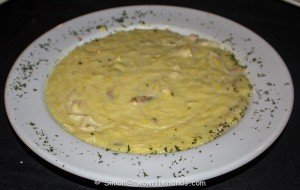 If you’re looking for some comfort food with a twist, you can’t go wrong with chicken soup with orzo. The night I tried it, it felt like a touch of my mother’s Jewish Penicillin, kissed by a Mediterranean breeze. The soup had the traditional hint of lemon in the broth that was thickened by the pasta, and the tender chunks of chicken made it a meal in itself. It’s the kind of chicken soup I would want to have if I had a cold.

If you’re not into pork, try the chicken souvlaki. It’s  just as delectable as Simon’s pork souvlaki, except it taste like chicken.

FHFS also does an outstanding job with their Spanakopita, the flaky spinach and cheese-filled triangles that everyone loves, but few can pronounce.

Despite my love affair with the Gyros, my favorite Greek offering at FHFS is the Pastitsio. Some call it Greek Lasagna, but the two dishes couldn’t be more different. 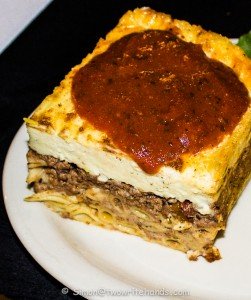 It begins with seasoned ground beef mixed with penne pasta. This is topped with more seasoned ground beef and then a thick layer of béchamel sauce that is smooth but firm. The crowning touch is a thin layer of tangy tomato sauce. Like the soup, I would consider this to be comfort food. The combination of flavors and textures is pure harmony going down. 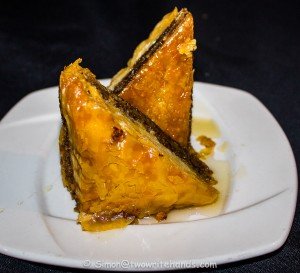 Make sure you have room for dessert. FHFS makes some of the best baklava I’ve ever had the pleasure to consume. The crisp, layers of phyllo dough and the nutty, sweet filling will make you forget all the calories that accompany all that goodness. Well, they say that nuts are good for you, don’t they?

These, as well as other Greek specialties, can be enjoyed every Wednesday evening on “Greek Night”. Several of these items, including the Gyros,  can also be found on their regular menu.

Pleasing More than Just Your Palate

If greek-style food isn’t your thing, FHFS’s menu includes a variety of seafood dishes, steaks, spaghetti and meatballs, creative sandwiches, italian specialties and some of the best burgers I’ve ever had. If there’s one thing that Roy and Chris know how to do, it’s season meat to the point of over-the-top scrumptious.

But FHFS has still more for its regulars, as well as new diners. Tina has turned her creative talents toward organizing special theme nights with their own menus, such as country music parties, complete with barbecue and line dancing. “Tina comes up with the ideas, and I come up with the appropriate food”, Chris explained. Live music and deck parties are regular fixtures on weekends. Schedules can be found on a monthly calendar that appears on the FHFS website and Face Book page.

Along with the delicious offerings of FHFS, prompt and friendly service, create a winning combination that makes this establishment a local gem, as well as a destination for those who appreciate food that is prepared and served by passionate professionals.

When I asked Roy what the secret is to what makes this restaurant so special, he replied without hesitation, “It’s the passion behind what we do. It’s the love.” Since I appreciate both of these ingredients in my restaurant experiences, there’s no doubt that when I walk into FHFS, I’ve come to the right place

Fairfield Harbour Food and Spirits is located at the end of Broad Creek Road at 100 Marina Drive.