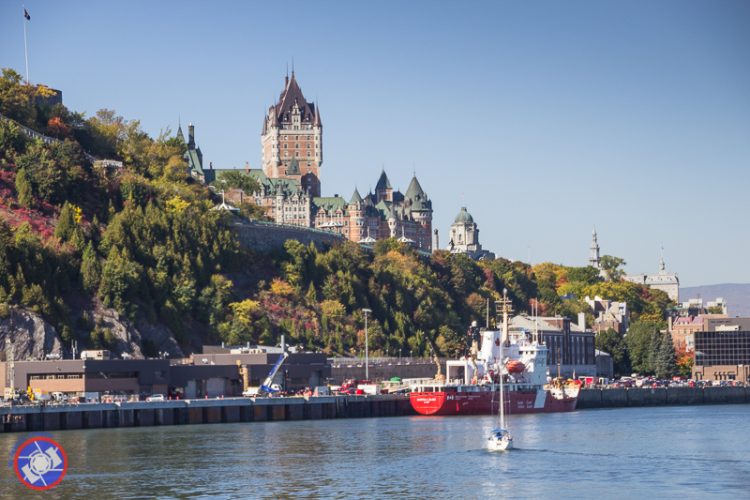 Stunning Scenery and an Entertaining History Lesson on the St. Lawrence

Quebec City is a perfectly balanced combination of fascinating history, magnificent landscapes, cosmopolitan atmosphere and friendly inhabitants. The city is walkable, and touring on foot or by hop-on-hop-off bus is a true pleasure. But one of the most enjoyable ways to experience the magic of Quebec City is on a guided river cruise on the St. Lawrence River.

Simon, Otto and I boarded the AML Louis Jolliet on the kind of Indian Summer afternoon you might see depicted on a Quebec City postcard. We took our seats on the bow terrace, and we were off. A View of Quebec City with the Chateau Frontenac Dominating the Skyline (©simon@myeclecticimages.com)

Our guide was a young man dressed in the attire of the 17th century explorer Louis Jolliet, for whom the boat was named, complete with try-corner hat. Jolliet was a French cartographer and sailor hired by the King of France himself to chart bodies of water in what was then known as New France. Along with his accomplishments exploring the St. Lawrence River, he was the first to chart the Mississippi.

Alternating seamlessly between French and English, “Louis” imparted historical facts and explained passing points of interest during our one-and-a-half-hour cruise. For one thing, we learned the name Quebec is not French. It was in fact inspired by the Algonquin word for narrows.

Like Quebec City, the Louis Jolliet has a history, albeit not as long. Built in 1938 by Davie Shipbuilding, now known as Chantier Davie Canada Inc, it was originally used as a car and passenger ferry. During this time, the Louis Jolliet was powered by a steam engine, which had been salvaged from another vessel. The engine was converted to diesel in 1972, when AML reconfigured the Louis Jolliet, and repurposed it as a river cruise boat.

Today, the Louis Jolliet can accommodate up to 1,000 passengers. It sports four decks, three terraces, three restaurants and a full bar. The lowest deck, where cars were once transported, was renovated and is now used for weddings, parties, fundraisers, press conferences and other events. This part of the boat was closed during our river cruise.

Cruising Down the River

As we departed, we waved goodbye to the Queen Mary II, the biggest ship to dock at Quebec City. Because it has a deep water port, massive hulks such as this can carry thousands of passengers to and from this remarkable destination.

The Queen Mary 2 Docked Adjacent to the Historical Section of Quebec City (©simon@myeclecticimages.com)

Our history lesson began as we passed the Cap Diamant Cliffs, which separate the lower and upper parts of Quebec City. It was at a point approximately a quarter mile upstream from us where, in 1759, British General James Wolfe and his troops scaled the cliffs to engage French forces in a dramatic battle. Wolfe’s subsequent victory marked the beginning of the end to France’s claim to the land that would become part of Canada in 1867.

Moving down stream from the city we passed a large shipyard, and learned it had been built in 1829, and was one of the largest in Canada. During WWII, it played a critical role in the drama unfolding in the Atlantic. The yard had been pressed into service, building escort ships for convoys transporting vital supplies and troops to England. These ships were charged with defending the convoys against the ever-present threat from German U boats.

A View of the Quebec City Skyline from the St. Lawrence River (©simon@myeclecticimages.com)

The Laurentian Mountains, dressed in brilliant fall colors, provided a stunning backdrop as the Montmorency Falls came into view. On the way toward them, we passed close to Île d’Orléans. This small island had been one of the first areas in Quebec colonized by the French. To this day, the 7,500 residents continue to keep their culture alive. You’ll see no shopping malls or fast food chains. Instead, you’ll find delicious artisan cheeses, apple cider from local orchards, hand-made chocolates and fresh produce. If you can’t make it out to the island, you can become acquainted with Île d’Orléans’ bounty at the Marché du Vieux-Port, in Quebec City.

To the Falls and Back

The Montmorency Falls begin their journey 50 miles away in the Laurentian’s. At 274 feet, these falls are taller than their Niagara counterpart, but not nearly as wide

The Louis Jolliet didn’t get close enough to the falls for us to hear their roar, but even from a distance, there was no doubt as to their formidable strength. In fact, the first hydroelectric plant built in Quebec was powered by the Monmorency Falls.

The Montmorency Falls as Seen from the St. Lawrence River (©simon@myeclecticimages.com)

“Louis” gave us sufficient notice as we approached the best vantage point for photographing the falls. Then the boat turned, and we were on our way back to port.

You can purchase food and drinks during your river cruise, but I opted, in the interest of good journalism, to try something only available in the Provence of Quebec. Coureur des Bois is served over ice, and consists of Canadian whiskey blended with maple syrup to create a liquor. A shot of this concoction on board the AML Louis Jolliet normally sells for $8 but, on this particular afternoon, mine only set me back $5.

The texture was surprisingly smooth. I was aware of the subtle sweetness from the maple syrup at the front end, but the flavors seemed to blend and mellow farther down. The Coureur des Bois website will tell you more.

History lesson over, I sipped my Coureur des Bois, and enjoyed the warm sunshine reflecting off the water and soft breeze. Our river cruise had all the elements for a perfect afternoon: historical references, breathtaking scenery, beautiful weather and another opportunity to wave at the Queen Mary II on our way back into dock.

The Croisières AML guided sightseeing cruise of Quebec City’s port on the AmL Louis Jolliet departs from Chouinard Pier daily from early May through the third week in October. The duration of the tour is 90 minutes, and is conducted in French and English.

Indoor and outdoor bistro service is available during the cruise . Smoking is prohibited , and food or drinks cannot be brought aboard.

The Louis Jolliet is not able to accommodate electric wheelchairs, however, passengers using manual wheelchairs are welcome to take the river cruise. Assistance will be provided upon embarkation, disembarkation and for moving about the boat.

For ticket prices and information about this or other cruises offered by Croisières AML, visit their website, there is a link for online reservations or you can call 1 866 856-6668 in the USA or Canada.

Disclaimer: Our visit to Quebec City was generously hosted in part by Office du Tourisme de Quebec. However, all opinions, as always are entirely my own.