In Search of a Panamanian Paradise ~ Chapter 2

Six Legs on the Ground in Panama: First Impressions 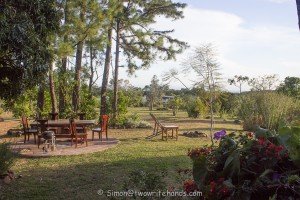 The current temperature is in the low 70’s, with a light breeze rustling the tree branches. There is the sound of birds and a dog barking in the distance. I can hear Simon preparing the barbecue pit for the chicken he will grill for tonight’s dinner. I’m sitting on a porch in a rattan chair with my computer in my lap and Otto comfortably settled next to me, waiting for one of my hands to wander from the keyboard and scratch him behind those buttery ears. Life in Panama is good!

What began as a two-day trip from our home in New Bern, has turned into a month-long vacation in one of the most beautiful and friendly locations in the world. From the kind, helpful and efficient officials that worked with us at the airport in Panama City in dealing with Otto’s paperwork, to the dentist who is working on Simon’s teeth, to the cab drivers in their beat-up vehicles, the people of Panama are as warm and friendly as the breeze on a Boquete morning.

Simon, Otto and I are comfortably situated in a small apartment in the hills above Boquete (pronounced Bo-keh-tay). 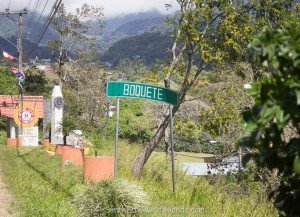 Marni Craig, our landlady, is in California, and will be returning on Monday. Her apartment is right behind ours, so she will soon be our neighbor, too. 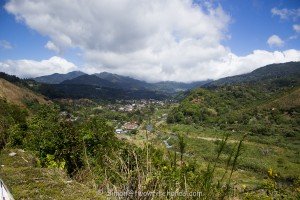 The apartments are actually a single-story building divided into three living areas. There is no heat or AC, but there is no need for any. Our windows are open 24-7, and we are never too hot or too cold. The one drawback is the dust. it gets into everything, and we are constantly cleaning it off our computers, as well as other things. It’s a good thing that I gave us both keyboard protectors for Christmas. 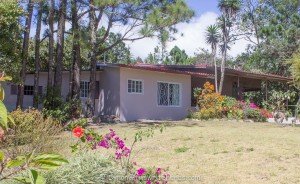 Oswaldo and Yilka, a married couple, are the caretakers, and a more delightful couple would be hard to find. Today, while I was in my usual writing spot on the porch , Yilka brought me an orange she had picked fresh from one of the many citrus trees on the property. She had peeled it, and cut a piece off the top. She showed me how to squeeze the juice until it comes to the top for drinking.

Our neighbor is Jay, a retired energy consultant from Houston, TX. We’ve shared meals, cocktails and trips into Boquete, along with a lot of laughs.

The weather is warn, dry and sunny. We’ve seen some clouds, and it has felt as though it might rain, with short periods of tiny droplets landing on us, but it hasn’t rained.

It is summer in Panama, and very dry. Temperatures in Boquete range from the mid 60’s to the low 80’s, with lots of wind.

The wind in the trees can sound like rushing water, or a train coming through. Last night, it even howled. The interesting thing, though is that, even when it’s blowing hard in your face, the wind isn’t at all cold.

Every morning I say the same thing, “What a beautiful day!” I may vary the adjective, using words like “glorious” and spectacular”, but the sentiment is the same.

We have been here just over a week, and I feel comfortable in sharing my early impressions of our region of Panama.

Although life moves at a slow pace here, the time definitely does not. We have done quite a lot since we arrived in Panama, but there is still much we want to do. One thing is certain: we will savor every minute we are in this country.