In Search of a Panamanian Paradise ~ Chapter 3

Down in the Mouth in Panama

One of our purposes for visiting Panama was for me to have some long overdue dental work performed. You might ask why one would want to visit a dentist in a foreign country rather than having the work done close to home. Well it all boils down to the almighty dollar.

I first heard of the concept of medical tourism several years ago but never imagined that I would one day consider this a viable option for myself. However, after being told that I needed to have three crowns added to my mouth and the associated cost I first went into denial, then I put off the work over a period of several years and finally admitted that now that I had the time to have the work done it made infinite sense to combine a mouthful of dental work with a vacation.

So started the search for the right dentist to whom I could entrust the work. My first point of attack was of course to conduct a diligent search on the internet. Originally I was considering going to either Costa Rica or Panama so included both countries in my search. I tried contacting several clinics in both San Jose, Costa Rica and Panama City describing the type of services that I had been told I needed and requested preliminary quotes that included cleaning, the necessary x-rays and the cost per crown. What I found was that several of the clinics in San Jose were using US-based companies to handle enquiries, while with the Panamanian dentist in Panama City they either did not respond or the response came directly from the clinic.

Based on pricing I refocused my search just in Panama and started looking outside of Panama City because we did not relish the idea of spending two to four weeks in a busy city. Expanding my search I stumbled on some dentists in David in Chiriqui province and once again sent out emails enquiring an estimated cost for their services. In the meantime I also discovered several expat websites and was able to gain some additional insights on the dentists to whom I had sent my initial enquiries. 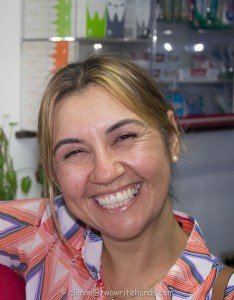 Based on all the information I had gathered and the responses from the dentists I ended up selecting Dra Luz Magalys Serrano who owns and operates the Clinica Medico y Dental San Antonio (http://www.panamadentalclinic.com). 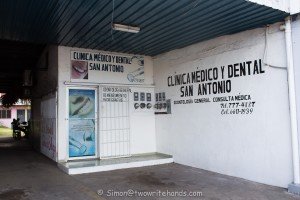 Entrance to the dental clinic

Even before my first appointment I met an expat in the Boquete supermarket who during the course of conversation provided me with some powerful accolades for Dra Serrano. This gave me an extra measure of reassurance that my gamble would likely pay off.

Having now been twice to see Dra. Serrano, the first time to have x-rays and a discussion of the treatment I would need and the second time to replace two very old amalgam fillings I am convinced that I had made the right decision. Dra Serrano is a seemingly very competent dentist with a gentle touch and a winning personality. Her English is excellent so I feel very comfortable with discussing what needs to be done and her staff also speak enough English to facilitate making future appointments.

Once my treatment is complete I will provide an update with some real time costs and how our month long trip to Panama including the dental care compares to having the same work completed in the USA.