In Search of a Panamanian Paradise ~ Chapter 4

Life’s a Beach, and then You Enjoy the Heck Out of It

Through our spotty internet access, we’re hearing the reports from home about snow, ice, stranded motorists and the complete inability of anyone to deal with it. Were we there, we would be having a hard time dealing with it ourselves, but, we’re not in New Bern, North Carolina. We’re at Barqueta adjacent to Las Olas Resort, a popular beach area on Panama’s Pacific coast.

After countless long walks (which were pleasant but time-consuming), bus and taxi rides, we finally broke down and rented a car, and made a beeline for the Pacific coast, in search of one of the country’s famous beaches. 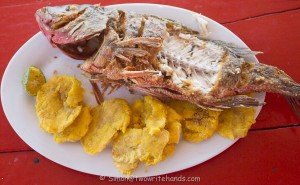 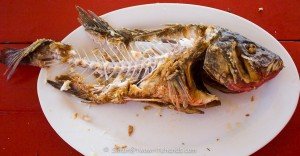 The end of a great meal

Right now, I’m sitting on the patio of a small seafood restaurant, a stone’s-throw from the crystal blue waves breaking on a quiet stretch of sandy beach. We have just finished a simple, but tasty, lunch of perfectly prepared shrimp, red snapper and crisp patacones (fried green plantain patties). As I write, I can hear the sound of several conversations in Spanish, children shouting to each other as they play on the beach and music coming from the interior of the restaurant. But these sounds are no match for the steady roar of the surf. 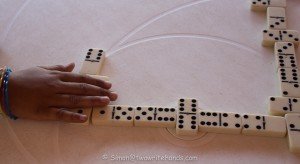 My almost-empty cerveza (beer) is on the table, just to the right of my computer, Simon is in the chair to my left, checking his email, and Otto is snoozing on the cool tiles. If I wasn’t sitting upright in one of those butt-busting plastic chairs, I would be very tempted to join him, and let the soft, gentle breeze caress me to sleep. 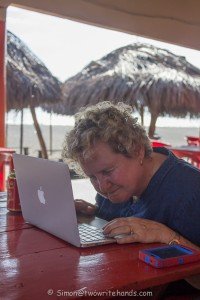 What a dedicated writer does at the beach

From the cool, dry air of the hills overlooking Boquete to the site of this sensory massage parlor is a mere 90 minutes, over relatively well maintained roads. The sun is very intense, and the air is humid, but the constant breeze takes the edge off any discomfort.

Although the ocean here has a dangerous undertow, visitors are still drawn to its soft sand and laid-back atmosphere. There are people sitting on the sand, while the waves roll over their legs. There are people in the shallow water, cooling off. But no one seems inclined to venture into deeper water. The reports of several drownings in recent months appear to have made sensible behavior a popular notion. 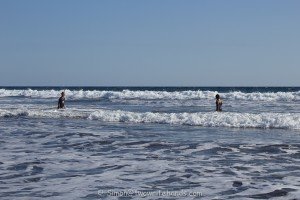 People in the Pacific 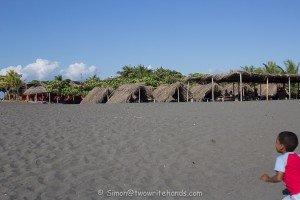 With my fair skin, which tends to burn, and the fact that I haven’t written anything in days, I will keep my butt on the plastic, while Simon takes a quick dip in the Pacific. My second ice-cold cerveza has just arrived, making the task of catching-up ahead less daunting than it would be almost anywhere else.

If You Can’t Find the Beach, Enjoy the Heck out of What You Do Find

After having spent a stress-busting afternoon on Panama’s Pacific coast, we decided that while we still had the rental car, we shouldn’t miss the opportunity of visiting the Caribbean shore. So, at the butt-crack of dawn, we set off on what turned out to be a four-hour drive to Almirante in the seaside Bocas del Toro District in search of another beach.

The drive took us south from Boquete and then east to Caldera, from which we continued east on to a bumpy road that led us several bone-jarring miles, until we turned north. This road took us through hills with spectacular views and lush greenery, and down through a rain forest, finally depositing us at a T-junction. There we had a decision to make. Should we go the over 60 kilometers to Almirante, or should we take a shorter route to Chiriqui Grande? 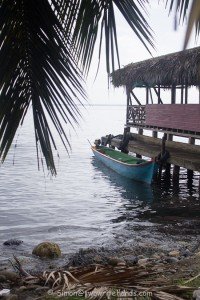 We went to Chiriqui Grande, and ended up in a tiny port village. It was dusty, with tiny houses on stilts and one or two little shops in the main street. The people may have been poor by American standards, but they were clean, wore simple, but neat clothes and, most important, they looked happy.

We found a spot where we could look over the harbor. Simon found some good photo ops. I found the salty smell of the ocean and the light breeze invigorating. But we found no beach. So, it was back to plan A.

When we finally arrived in Almirante, we learned that the beach we were seeking was to be found across the water at Bocas del Toro, at least a half hour away by water taxi. William, a young man with a ear-pleasing Caribbean lilt, said that it was “paradise”, and offered to arrange to have us taken there.

Since it was mid-afternoon, and Simon had no intention of taking that challenging drive back in the dark, we did the next best thing. We found lunch. 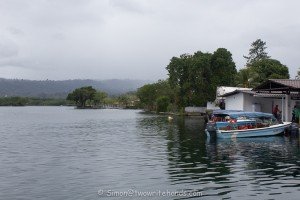 A view from a restaurant in Almirante

The restaurant we chose had a thatched roof and a concrete deck that stretched about 20 feet over the water, where boats could pull up and drop passengers off for a meal.

My lunch consisted of shrimp, vegetables and vermicelli in a savory sauce. Of course, it was washed down with cerveza.

I settled down to do some writing, while Simon engaged the owner of the restaurant in conversation. His good command of English and his jovial demeanor made for an enjoyable interlude for Simon, in which he was introduced to a big, friendly fish that lived underneath the dock. It seems that all one has to do is drop something into the water, and the fish will come right up to investigate.

When we return to Panama, a visit to Bocas del Toro is near the top of the list of “must do’s”. But, for us, the time spent getting to the Caribbean side wasn’t a waste. Between the scenery and the pleasant atmosphere of the restaurant, it literally wasn’t a beach at all.