In Search of a Panamanian Paradise ~ Chapter 6 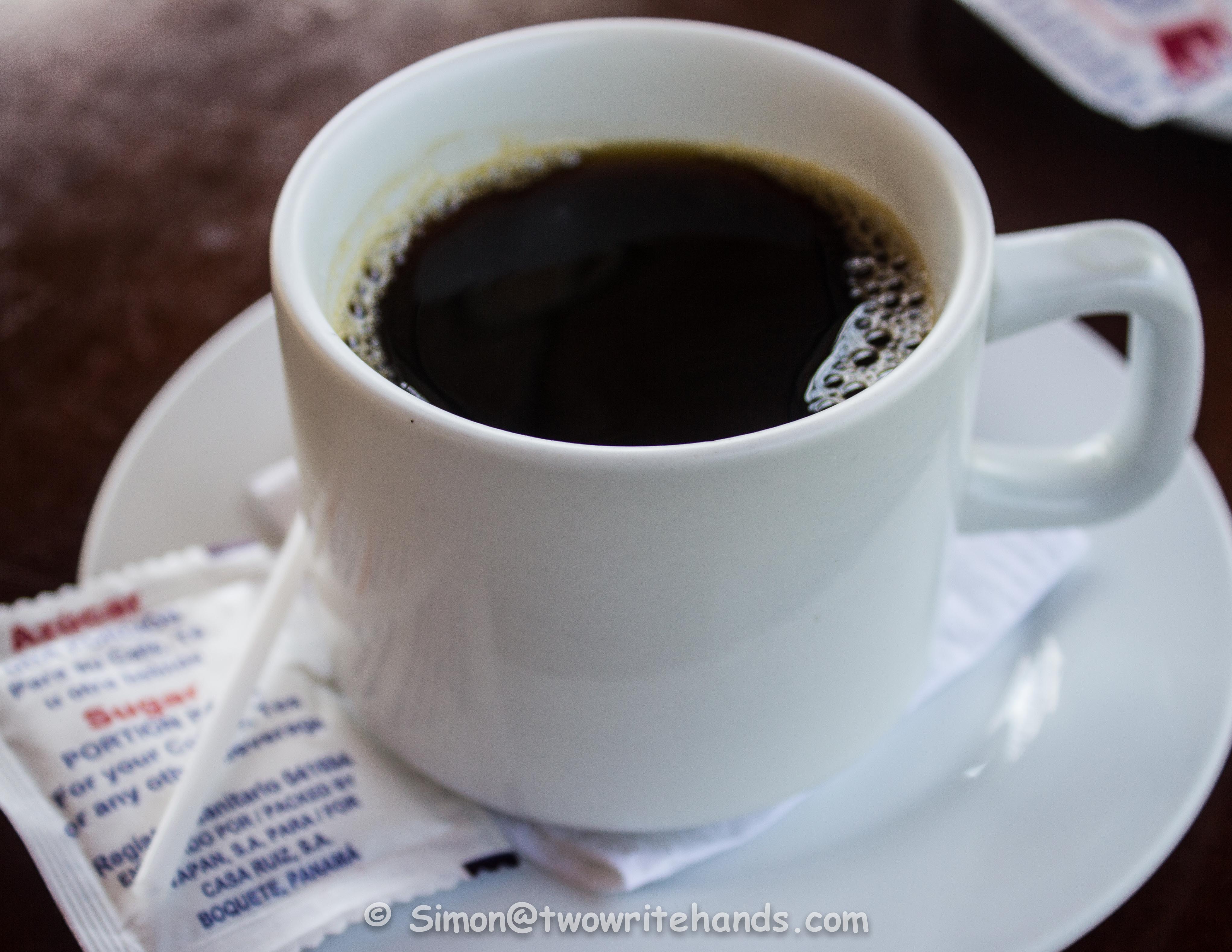 Boquete Coffee: Nirvana in a Cup

(Of late, the stories of our adventures in Panama have been sitting on the back burner. The reasons why don’t matter. What’s important is that there is still much to tell, and the saga will not be finished until I say it is.) 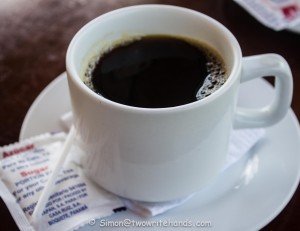 If you’re anything like Simon and me, you appreciate a good cup of coffee. One morning on a coffee farm in the Boquete area of Chiriqui Province, Panama, we learned to appreciate it even more. The lessons with which we came away about the coffee-making process, from the seed to the cup, will last a lifetime.

Our guide was Carlos, a man from the indigenous Ngobe tribe, in his mid-30’s, with an obvious dislike for thoughtless clear-cutting of trees, gated communities and people with no sense of humor. Since Simon and I were in full agreement, we instantly liked this forthright and articulate man. The tour took three hours, but by the time we left, processes had been explained, myths had been shattered and coffee has never been the same for us since.

Based on the nationality of the majority of first-place winners in coffee competitions such as the Cup of Excellence, Panama produces some of the best coffee in the world. Over 60 percent of that coffee is produced in the Boquete area. Although Panama is not considered a large coffee-producing country, this is one situation where quality trumps quantity every time.

There are 1200 coffee growers in and around Boquete, and 25 producers. Casa Ruiz, the company on whose property we stood, walked, learned and tasted, has 11 farms and produces all of its own coffee, as well as processing that of several other local growers. 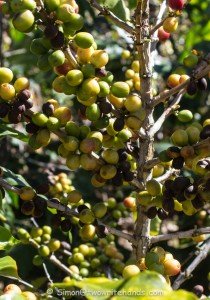 A Mass of Unripe Coffee Cherries

Because there is no coffee monopoly in Panama, all the growers are independent. This is why you can find excellent coffee, a fact to which we can attest. In other coffee-producing countries like Costa Rica and Nicaragua, the industry is controlled by either the government or cooperatives. The best beans are exported, and the folks at home in these countries can’t get a good cup of coffee to save their lives.

In Costa Rica, it is actually illegal to sell good quality coffee in-country. I wouldn’t even consider living there, even though it is supposed to be a lovely place to visit.

In Columbia, all the growers sell their beans to Juan Valdez. No, not the guy with the hat and the donkey; the cooperative named Juan Valdez. My friends can no longer claim that Juan named his donkey after me, to honor the magnitude of my coffee consumption. He doesn’t exist.

Before we move on to the 16-step process that results in the best coffee Simon and I have ever tasted, here are a few more fun facts:

There are two stages in the production process. The first seven steps take place outside, and the remaining nine are accomplished indoors.

As we walked, Carlos told us about the history of the Ruiz family, owners of the 11 farms, processing business, exporting business and a popular coffee shop in the town of Boquete, Cafe Ruiz:

The most common type of bean grown in the Boquete region is called Arabica, considered to be the best mass produced coffee bean in the world. The beans originally came from Ethiopia. Because Panama has the same latitude, high elevations, along with lots of rain this bean can grow just as successfully. Add to this the fact that coffee grows well in volcanic soil, and Boquete has a winning combination for producing truly spectacular coffee.

Speaking of beans, Carlos explained to us how Sumatra Beans, from Indonesia, are initially processed. Apparently, the coffee fruit is fed to civet cats. The beans themselves are not digested, and do not get damaged. “Once they poop it out,” said Carlos, “people take the poop, roast it. Then they take the roasted beans from the roasted poop and sell it in the United States.”

“Whatever for,” some of us wanted to know. Well, it seems that the coffee ferments in the cats’ stomachs, and the acid takes the bitterness away, making it sweeter. My initial reaction was that if I want sweet coffee – perish the thought – I can always put sugar in it. Thank you very much! But then my commitment to trying anything once began to insert doubts into my own assertion.

In Carlos’s opinion, Ruiz makes better coffee at $7 a pound. “Besides,” he added, “we don’t have the right cats here.”

According to Carlos, they are trying something similar in Thailand with elephants and calling it “Black Ivory”. Okay, I do eat, and love, mushrooms, which grow in horse shit, and I suppose that this method of coffee bean excretion isn’t much different. So, if offered the opportunity, I would try it, and hope the beans used in my cup of Joe were thoroughly washed!

Sumatra is the second most expensive coffee in the world. So what is the most expensive? It’s Geisha; grown in Boquete, without any help from the animal kingdom.

Geisha coffee has a sweet and fruity aroma, with a hint of jasmine. The taste is citrusy, with some coffee flavor, but doesn’t taste like regular coffee as we know it. The finish is orangey, and the whole thing is supposed to taste more like tea. In fact, this difficult-to-grow, expensive coffee is tailor-made for people who don’t like coffee. Go figure!

Cafe Ruiz sells its Geisha coffee for $9 a cup and close to $110 per pound. But exporting it to Europe may be problematic, because a lot of Europeans, who are used to drinking espresso don’t necessarily care for the mild flavor of Geisha.

Thus informed, entertained and surprised, we were ushered into the indoor area to learn about the remaining steps of the coffee process.

A Taste of Nirvana

Finally, after nearly three hours of walking, seeing, learning and enjoying, we were invited to sit down and indulge ourselves in some of the heavenly product we watched being created. First we were offered a sample of light roast coffee. It was sharper at the front end, with a smoother finish

Then came the medium roast, which was more balanced with a slight sharpness at the end. Most Panamanians drink their coffee this way.

The dark roast is used to make espresso. It has a smoky aftertaste, and, just in case you didn’t hear me the first time, has the least caffeine.

We then tried the light roast again, and noticed a very subtle hint of citrus.

Carlos told us that water affects coffee flavor, and suggested using filtered or bottled water to make the best coffee. He also said that the ideal temperature for the water is 205 degrees F.; just below the boiling point.

We were each sent on our way wit a goodie bag containing a 1 pound bag of Ruiz’s medium roast ground coffee, which Simon and I immediately swapped for bags of light roast beans.

Now, several months later, we mail-order Boquete coffee, and, following another of Carlos’s suggestions, we only use a French press. But more important, we have a deep appreciation of the time and effort that we now know has gone into our delicious morning brew.

To learn more about Cafe Ruiz, go to http://www.caferuiz-boquete.com