In Search of a Panamanian Paradise ~ Chapter 7 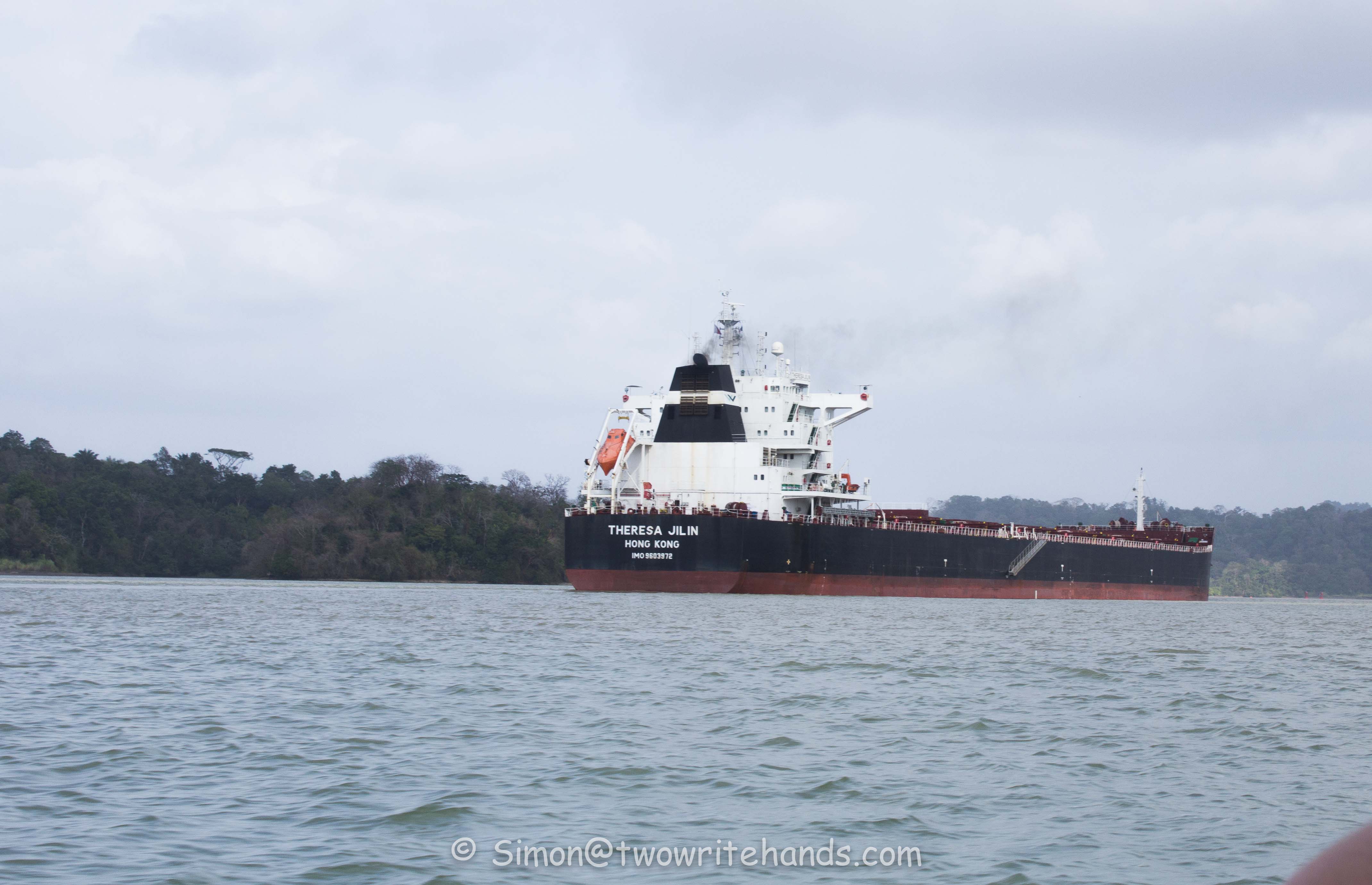 The Panama Canal: The 100-Year-Old Gift that Keeps on Giving

What is a man-made wonder that has benefited the entire planet, and has brought a century’s worth of economic growth, tourism, political stability and a prominent role on the world stage to a small Central American Country? If your answer was the Panama Canal, go to the head of the class. 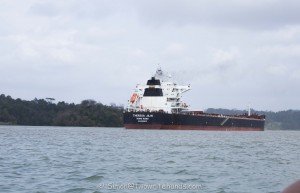 Since Simon, Otto and I spent the better part of a month in the hills overlooking the town of Boquete, about eight hours west of Panama City, our encounter with the Panama Canal had to wait. That’s not to say that we weren’t able to see its benefits for the Panamanian people in terms of the low rates of crime and unemployment, as well as in the availability of goods and abundance of food to be found.

We had two days to spend in Panama City before our return to New Bern, and it was on the first day that Simon took the Panama Canal Boat Eco Tour.

We thought this would be a unique way to experience the Canal. But when, while making our reservations, I informed Panama Travel Corp Operations Manager, Pierre Miller, that I was traveling with a guide dog, he notified me, with regret, that Otto was a no-go, because the boat would be traveling through areas where encounters with monkeys and other wildlife were part of the tour, and that these creatures could cause unpleasant consequences for the other passengers, because of the presence of a strange animal.

Now normally I would vigorously dispute exclusion of my guide dog from areas and activities to which the public has access, but there were two reasons why I didn’t. The first was that in Panama there is nothing remotely resembling the Americans with Disabilities Act, and I had no legal leg on which to stand. The second, and more important was that Pierre was right.

My mind went back to more than one excursion to the zoo with our children where big cats went crazy and monkeys threw feces at us. And those monkeys had damn good aim!

One particularly pissed off tiger loudly roared his frustration and threw himself at the bars of his cage again and again at the sight of my golden retriever, Regal. She must have looked liked a very tasty lunch that was just beyond reach, but since that day, I’ve never gone anywhere near big cats or monkeys when visiting the zoo. Sadly, the prohibition made perfect sense.

Since there was no place to safely leave Otto, I spent the day catching up on reading, writing and a little much-needed sleep. When Simon returned, I was caught up and rested enough to grill him mercilessly about his six-hour adventure.

Before continuing with Simon’s experiences on his tour, it’s important to understand how the Panama Canal came to be. If history just isn’t your thing, feel free to skip to the next section. Of course, I hope you’ll stick around and that you’ll find it as fascinating and inspiring as I do.

The world-famous waterway that joins the Atlantic and Pacific oceans is approximately 50 miles (77 km) long. Although the official construction period took place between 1903 and 1914, the dream of building a passage between these two giants that would save ships bearing goods, military personnel and equipment and travelers 8,000 miles rounding the southern tip of the Americas was over half a century in becoming a reality.

Great Britain signed a treaty with the United States in 1850 that proposed construction of a canal through Nicaragua. However, the project never got off the ground.

France decided to capitalize on the potential, and began work on a canal project through Panama in 1880. Ferdinand de Lesseps, the famous builder of Egypt’s Suez Canal lead the project, however, bankruptcy, in 1888, along with deplorable  working and living conditions, malaria, yellow fever, and other tropical diseases,resulted in a disastrous conclusion. In all, approximately 20,000 workers lost their lives.

But the United States was still interested in seeing the dream come to fruition. A new treaty, signed in 1901 licensed the undertaking of the building of what we now know as the Panama Canal.

Columbia, of which Panama was then a province, began squabbling over financial concerns. This didn’t sit well with Panama or Theodor Roosevelt, who dispatched warships to both sides of  the soon-to-be sovereign nation. Panama achieved its independence on November 3, 1903. Today, the country goes into party mode for the entire month of November to celebrate.

Construction of the canal was restarted, and by 1908, the number of workers had swelled to 45,000. These workers came from Panama, the United States, Europe, Asia and the West Indies. The men worked insanely long hours that today would have had the entire project shut down by the government within days.

During the combined French and United States building period, approximately 25,000 workers died. There were enormous obstacles: excavation of mountainous land, clearing of jungle, outbreaks of deadly diseases, faulty construction techniques, landslides, accidental dynamite detonations not to mention governmental bureaucracy and allegations of fraud. I guess not much has changed in the way things are done.

Still, the canal took shape, grew and on August 15, 1914, the Panama Canal officially opened for business.

When in 1999, the United States turned ownership of the Panama Canal over to the Panamanians, there was skepticism that this small Latin American nation was up to the daunting task of harnessing the full potential of this maritime miracle for the benefit of its people.

Fast-forward 15 years, and the Panamanian people are now the second-wealthiest in Latin America, and hot on the heels of first-place Chile.

The growth of the economy during this period has been nothing short of amazing, and all Panamanians have benefitted from this expansion. In fact, Panama now has a Gross Domestic Product Purchasing Power Parity per capita of about $16,000.

On August 15, 2014, Panamanians celebrated not only the 100th anniversary of the opening of the Panama Canal, but the near-completion of an expansion that will widen the canal with the addition of a third set of locks. This will allow today’s floating giants to pass through, bringing even more prosperity and jobs to Panama. Look out, Chile!

A Day of Discovery and Relaxation

Simon’s day exploring the Panama Canal began at the Gamboa Public Dock close to the Parque Nacional  Soberania and a 30 minute cab ride from the city. A dozen tourists boarded a small flat-bottom boat with bench seats that could accommodate approximately 20 passengers, and a hard-top canopy that offered protection from the relentless tropical sun.

The captain/ tour guide steered the boat under a railroad bridge and into Rio Chagres /Lake Gatun, which are interconnected as part of the canal system. 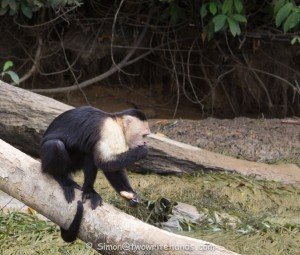 The first stop was a small island, where a single capuchin monkey lives, eats, plays and does what ever single monkeys do. When the guide called out, the monkey came out to the water’s edge and caught peanuts thrown to him by the guide and passengers. This particular monkey is not permitted to board the boat, lest he try to escape from the island.

The tour then proceeded off the main  waterway into the area that was exclusively Lake Gatun, where a myriad of wildlife could be seen close up. There were ibis, snail kites and caracara along with other water birds, crocodiles, and small monkeys. Visiting another island these primates, mostly capuchins, were permitted to come aboard, and were fed peanuts and banana pieces. Some grabbed the food and ran, while others chose to dine onboard hoping for additional handouts. I shudder to think what would have happened had Otto been present. 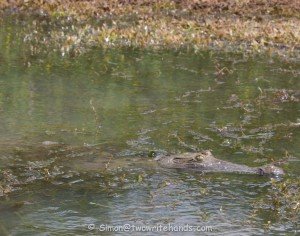 As the tour continued, the guide pointed out the indigenous flora and fauna.

The boat cruised past an industrial area that boasts the largest floating crane in the world. This is one of three that were built in 1941 by the Nazis, and were seized by the allies as “war booty”. The British lost theirs in a storm on its way to England, no one knows what the Russians did with theirs, and the Americans took theirs to Long Beach, CA, where it was dubbed Herman the German.

In 1996, the Panama Canal Authority bought the crane, named it Titan and it is now in use lifting 700 ton lock gates as part of the canal’s maintenance program. 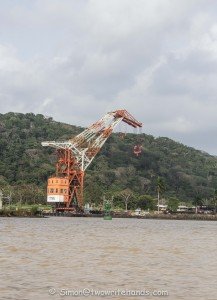 As the tour progressed, the captain explained the sophisticated and complex processes used to expand the Canal. The land is excavated down to the water level, holes are drilled, explosive charges are carefully lowered into place and ignited. Bulldozers and then floating bucket cranes and dredges remove the rubble and deposit it along the new shoreline in order to build it up. These areas will be claimed by the jungle within a year. 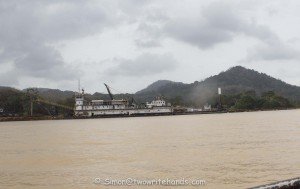 Dredge for Excavating Rock from the Canal

Dredging barges with half-mile-long pipes are being used to increase the depth of the canal from 40 to 70 feet. The dredge spoils are also dumped to build up the land along the new shoreline.

The expansion is scheduled to be completed by April, 2015, giving the Panamanian people yet another reason to celebrate.

Views of enormous ships sailing along the canal and the ongoing expansion work rounded out the first part of the tour. Then it was play time.

The boat maneuvered up a shallow, narrow creek through the jungle, which opened out into a small lake. The destination was a floating hotel called Jungle Land. 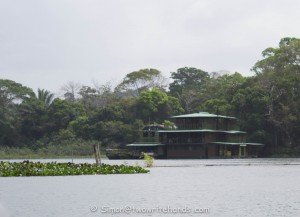 There the passengers enjoyed a Panamanian-style lunch of grilled chicken, beets, vegetable fried rice, tamales and an unusual coleslaw. There was a choice of afternoon activities including swimming, kayaking, fishing and/or snoozing in hammocks. Simon opted for a kayak trip into the jungle to a natural pool at the bottom of a waterfall where the participants spent time swimming in the refreshingly cool water. 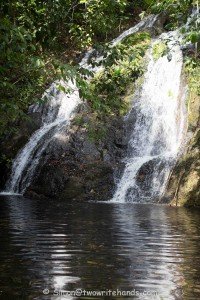 Waterfall and Swimming Hole Buried in the Jungle

All too soon it was time to board the boat for a high speed return trip to Gamboa public dock. But Simon had experienced a day of learning and relaxation that affected him on many levels.

Since we have every intention of returning to Panama sooner rather than later, we might try the Panama Canal Transit tour, which will hopefully be Otto-friendly. Meanwhile, Simon and I have nothing but respect for this super-centenarian known as the Panama Canal.

Learn about the Panama Boat Eco Tour, as well as other available tours at   http://www.panamatravelcorp.com or by calling either of the following numbers: