In Search of a Panamanian Paradise ~ Chapter 1 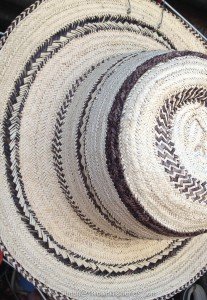 Simon, Otto and I are in Panama mode, and I will be updating this blog regularly on all that this entails. From advance preparations for our month-long visit, to experiences while there, I’ll be sharing the details of this adventure with you. There will be travel tips, stories and, no doubt, the occasional rant. You’ll learn along with us about the food, culture, politics and people of this popular Central American haven for tourists and expats. My hope is that you will find these posts both informative and entertaining. So stay tuned, and please share your comments, questions and suggestions.

Birth of a New Adventure

The first time Panama appeared on my mental radar screen was in Sixth Grade Geography. We were making an academic pit stop in Central America before moving on to the many countries of South America. Since I so enjoyed running my fingers over that pear-shaped continent on the raised map in our classroom in anticipation of learning about places like Brazil, “where the nuts come from,” and home of the then current dance craze called the bossa nova, I paid just enough attention to what was being taught about Panama and its neighbors to pass the mid-term test. In fact, by the end of the school year, all I could remember about Panama was that there was a big, important canal, and the people wore really cool hats.

Fast forward over half a century, and Panama is now looming large in our lives. For one thing, we are at a point where we can travel with no time restrictions, such as school schedules and job commitments. For another, Simon needs to have some extensive – and expensive – dental work, and we figured that we could have this done by an internationally trained Panamanian dentist, and enjoy a month’s vacation in Panama for about the same as it would cost to have it done Stateside. Once we have a final tally I will try to provide you with an update of how reality compares with assumptions we made while planning this trip.

Deciding on Panama as our destination was fairly easy. Although we had looked at Costa Rica as well, it came down to which country intrigued us more. Although we had heard wonderful stories about this geographically diverse and Gringo-friendly nation from friends and family members who had vacationed there, Panama still had the canal and the hats. Costa Rica is definitely on our list as a future destination.

Once we had settled on our destination and when we wanted to be in Panama, we read all we could, from articles in International Living to posts on expat forum web sites. Panama City seemed to be a logical choice at first, but Simon did further research, and found that dentistry was even less expensive in David, in the western province of Chiriqui and about 40 miles from the border with Costa Rica.

So David it was, but this is where we hit a snag. Chiriqui Province is very popular with both foreign and Panamanian tourists alike in what passes for winter over there, and accommodations in David were scarce. We also found that not everyone welcomes dogs, and, unlike the U.S., Canada, Great Britain and a host  of other countries, there is no legal obligation to make exceptions for service animals.

We cast our net farther afield, and came up with what looks like a delightful little cottage in the hill town of Boquete. With a population of about 20,000, Boquete is about 3,500 feet above sea level, so should be cooler during the day. Since we prefer the mountains to a big city, we thought that Boquete seemed like a Plan B that was just as good as Plan A.

Now, let me stop for a moment and speak in praise of the internet, no matter if Al Gore really invented it or not. Through Google, we found the generous and helpful expat online communities, where we were able to get recommendations for a dentist, AirBnB.com, where we found accommodations and online translation programs that provided us with the ability to send emails in Spanish that seemed to be acceptable enough to communicate with service providers.

Once we had our plane reservations, hotel in Panama City for our first night and home away from home sorted out, it was time to get Otto ready for his first Central American experience. Every country is different when it comes to animals, but they all have one thing in common – they want to make sure that all critters crossing their borders are healthy and properly vaccinated. In order to enter Panama, Otto had to be current on his shots, get an international health certificate from the vet. This then had to be certified by a vet at the US Department of Agriculture, and sent to the Panamanian Embassy in Washington for final certification. We will take all this paperwork to Tocumen Airport in Panama City, where a vet will be there to meet us and check Otto out.

If this sounds like a pain in the butt, remind me to tell you about what we had to go through last year, when we traveled to England and Israel! In fact, this will probably have a post of its own.

Before we can take off on our latest adventure, though, there is much to be done. We need to make arrangements for C.J., so she will be well looked after in our absence. Set timers on several lamps so that the house looks like we’re home, instead of exploring the natural and man-made treasures of Panama. Thoroughly clean the house (that’s like the clean underwear admonition), so no one will think we were’ pigs, if there’s an emergency and someone needs to get into the house. You get the picture. But now it’s almost show time, and the curtain is about to rise.