A Review of My UK SIM Card: 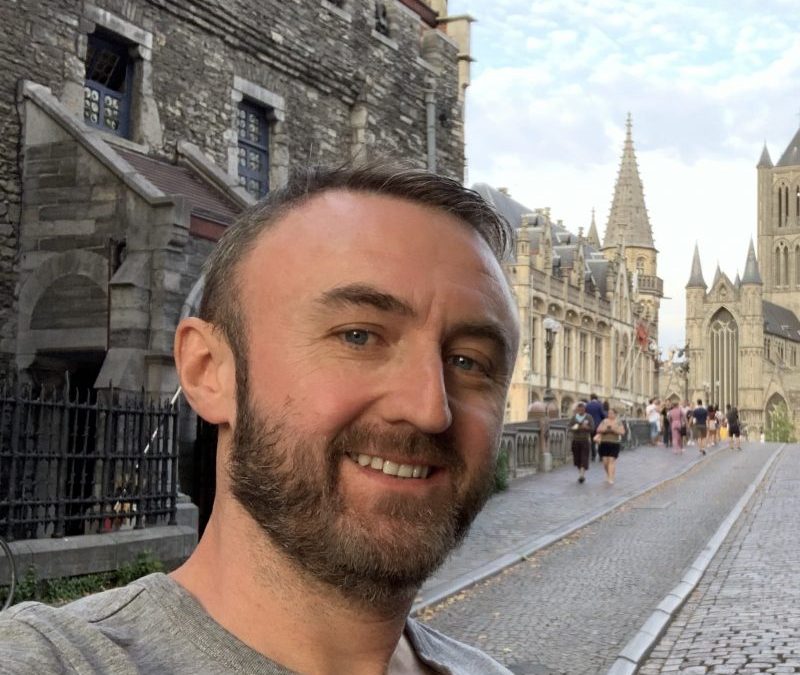 We often take for granted the degree to which we are dependent on our cell phones. This hit home in September 2019 when Simon and I arrived at London Gatwick late at night and couldn’t activate our European SIM cards properly. We had purchased them before leaving the U.S. and inserted them into our phones on the flight over.

Our immediate concern was not how we were going to text our sons that we had arrived safely. It was how the heck we were going to find our way from the airport to our hotel after midnight without GPS, as our rental car didn’t have onboard navigation. Fortunately, Simon was able to get excellent directions from a convenience store clerk, but that experience left us determined to find a better SIM card provider before our next overseas trip.

This is why, four months later, Simon suddenly took off like the proverbial bat-out-of-hell as we were waiting for the New York Times Travel Show to open. He had just seen a man with a shoulder bag emblazoned with “My UK SIM Card” and wanted to talk to him. This was how we met Nick Brennan, founder and CEO of My UK SIM Card, and how we found the solution to our SIM card problem.

My UK SIM Card is a prepaid card that is available for purchase in the USA and Canada. It comes with 12GB of high-speed data, unlimited minutes and unlimited texts for use in the UK and Europe for 30 consecutive days following activation. You can also use your phone as a hotspot with other devices.

The card can be used in the UK – England, Scotland, Wales, and Northern Ireland – as well as 30 European countries. And in case you were wondering, My UK SIM Card service is not at all affected by Brexit.

According to the My UK SIM Card website, the card self activates within minutes of turning on your cell phone upon arrival in the UK or any other part of Europe. After 30 days, a quick visit to the company website allows you to top up the card for one additional period of 30 days.

My UK SIM Card functions with all unlocked iPhones, as well as most other unlocked Smartphones. All your apps, contacts, and emails remain stored on the phone and not on the SIM card.

The cost of a phone SIM card is currently $39.99. You can also purchase a My UK SIM Card for a tablet that gives you 3GB of 4G LTE Data for the same price.

Nick Brennan was born, raised and attended law school in Sydney, Australia. He practiced law in Australia and then in the UK. Right around the time the global financial crisis hit, Nick became disillusioned. “Like many of my former colleagues,” Nick recalled, “I saw the light and got out of law.”

Finding another line of work proved to be more of a challenge than Nick had expected. He moved back to Sydney, earned a masters degree in project management, and began working for a friend who owned a software marketing company

Although Nick initially came onboard in a legal capacity, he soon moved into sales and account management. “That’s where I first got the idea of doing or selling something online,” Nick said. “I was around a lot of marketing people and learned how online advertising worked.” That was half of Nick’s transformation. The other half fell into place through Nick’s travels overseas, primarily to the USA. He quickly learned the challenges involved in trying to obtain reliable information and cell phone service.

As so many businesses are born, Nick’s began by solving a problem for himself and then for others. Nick started selling SIM cards on eBay to Australians traveling to the USA. Then he set up his own website. “That’s the core of a lot of small businesses; saving people time and money,” Nick said. His business grew from there. First providing SIM cards for travelers from Australia to Europe, and from the USA to the UK and Europe. Two years ago, Nick established his My UK SIM Card website.

Nick sees what he does as a win-win. My UK SIM Card provides his customers with peace of mind before departure. “They have everything already set up”. They have their SIM card in hand, knowing their phone will function when they arrive at their destination. “It’s not as though my product is unique and can’t be purchased elsewhere,” Nick explained, “but people need to have their phone working as soon as the plane touches down.” He knows from his own experience people need directions, to call for transportation, and to text family. “Google maps and translate when you don’t know the language is like having clean drinking water,” Nick said. “It’s a necessity for people in their normal day-to-day lives, let alone when they’re in a foreign country.”

For Nick, his business isn’t only about earning a living and providing quality service to his customers. My UK SIM Card donates 1% of the company’s annual profits to the Village Enterprise Charity, which empowers rural African people living in desperate poverty to lift themselves up through small sustainable businesses and savings groups.

Putting My UK SIM Card to the Test

Our My UK SIM Cards arrived as expected before our most recent trip. We inserted them shortly after take-off, and the cards behaved as advertised. We took our phones out of airplane mode as soon as the wheels met the runway and had full service by the time we reached the gate.

Throughout our travels, My UK SIM Card worked flawlessly, without interruption. We had all the capabilities we needed in terms of communication, navigation, and access to information. Each time we arrived in another country, a message would appear on our home screens letting us know our cards were functional.

As we have learned from past experience, the one downside to the use of a European SIM card is that one cannot call the USA directly as international phone rates are in effect. Nor is it possible to send SMS messages to the USA or other countries outside of Europe. However, this can be partially overcome by using any communication app that uses the data plan. A few examples include Apple FaceTime, iMessage, WhatsApp, Skype, Facebook Messenger, and Google Duo.

But forget about trying to communicate with your credit card company or insurance carrier. Unfortunately, these large corporations have not entered into the 21st century since they still instruct you to “call collect” – something that is impossible from a cell phone!

Our original plan was to spend six weeks in the UK and Europe, but Coronavirus shortened our trip to two. That meant we didn’t have the opportunity to see if the renewal process also worked as advertised. But considering our experience with My UK SIM Card, plus the simplicity of the process, we fully expect it would have gone off without a hitch.

The bottom line is that we will purchase My UK SIM Card’s product again. We recommend it to anyone who wants cost-effective, reliable cell phone service while in the UK and Europe.

Disclosure: The SIM cards we used for the purpose of this review were generously provided by My UK SIM Card. However, all opinions, as always are entirely my own.