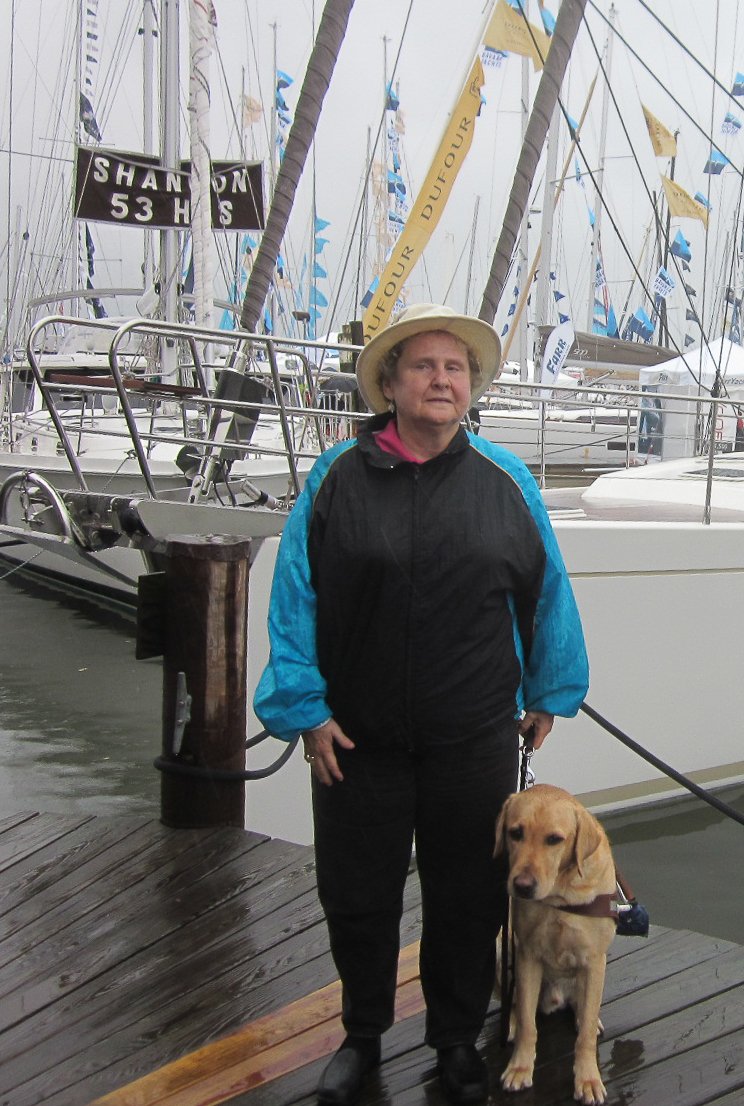 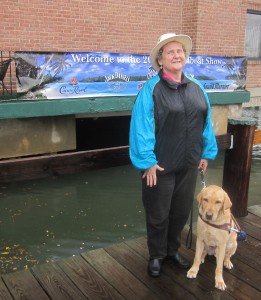 At the entrance to the Annapolis Boat Show
Copyright (c) 2013 simon@twowritehands.com

Annapolis, MD is a charming town with a world-famous Naval Academy, a rich history and friendly citizens. However, every October this normally peaceful place becomes a weekend paradise for swarms of sailors and sailor “wannabes”. But this year, not all the water was in the Chesapeake.

Yes, it rained. It rained the day before Simon, our friends, Jerry and Mallory, Otto and I left New Bern. It rained almost the entire time we were in Annapolis. And it rained most of the way home. For our first day at the Boat Show, the weather forecast said “drizzle”. But I’m sure that this was because someone didn’t know how to spell “deluge”!

Fortunately, all the exhibits, except the sailboats, were in tents. There were boat-related gadgets galore, and Simon couldn’t get enough. I mean that literally. We had to listen to him complain all the way home that there were at least one-and-a-half tents he missed.

While the boys lost themselves in GPS systems and such, Mallory, Otto and I went in search of girl stuff, and we weren’t disappointed. There was a booth featuring items from Alpaca International that was a touchable treat. There were sweaters, scarves, ponchos and capes, knitted, crocheted and woven into textures that made my fingertips sing!

Mallory handed me a red cape with rabbit fur detailing. When I held it up against me, she assured me that the shade suited me very well.

Knowing the quality of the materials and workmanship, I wondered out loud as to the price tag. “Four ninety-five,” said the helpful vendor.

“Four dollars and ninety-five cents,” I exclaimed. “I’ll take it.”

Around this time, Otto noticed the toy alpacas on display just slightly above nose level. It was Mallory’s quick intervention that averted a potentially disastrous and costly situation. I could almost hear Otto say, “But they looked like doggy toys to me!”

Otto presented us with a new challenge when we reached the edge of the tent in order to make our way to the next exhibit area. Now let me digress for a moment. Otto is my fourth guide dog, my third yellow Lab, my first male and the biggest wuss on four paws! It is those very paws that he hates to get wet. So I literally had to drag him out into the rain. To his credit, though, once outside, he worked like the excellent guide that he is.

Our next stop was Hendrick’s Gin, where they were giving away samples of their unique blend, mixed with tonic and a slice of cucumber floating in the luscious concoction. I say “luscious” because the gin is infused with cucumber and rose.

The first sip actually reminded me of why I no longer drink gin, but the second held the surprise of a floral note, which cut the bite of the drink. By the end of my second sample, I was actually loving it! “Great gin, I proclaimed, ”and the best damned pickled cucumbers I’ve ever had!

Next came the chocolate, courtesy of Parfections: Truffles and Gourmet Chocolates. There were samples of a wide assortment of truffles and bark.

We tried a dark chocolate bark with a strong coffee hit. Then we moved on to another dark chocolate bark, studded with dried raspberries. The combination of slightly sweet and slightly tart made a perfect tickle for the taste buds. We both chose this decadent treat to take back to our guys, in the hope that they would share. 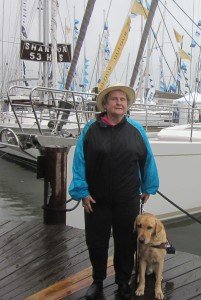 And so it went. We walked the floating docks between downpours, ogled the array of exquisite sailboats and discovered that we weren’t the only representatives of New Bern’s sailing contingent in Annapolis. In fact, we were chatting with one of the vendors, when she suddenly recognized me. It turned out that she lives about a block from our house. I told her that there was no need to apologize, because I hadn’t recognized her either.

But one of the best, and totally unexpected delights of our two-day adventure in the world of sailboats was the map shop in which Mallory and I waited for our husbands to emerge from Toy Land at the end of the second and last day. The great part was that all the maps were raised, meaning that I could “see” them. The not-so-great part was that they were all under glass. Fortunately, there were clocks that were not thus imprisoned. Mallory told me about her childhood memories of visits to her grandparents, on Nantucket, while pointing out geographical highlights that I could understand by moving the hands out of the way and running my fingers over the face of the clock that was a raised map of the island, surrounded by tactile numbers. Naturally, by the time we left, the hands weren’t even close to telling the correct time..

For those who have the slightest interest in boats, Annapolis has two multi-day extravaganzas each fall. The first boat show is devoted to getting the power boaters revved up. This is followed closely by the sailors’ delight that has become a siren song for Simon and me. When we were unable to be there, we would note its passing with a sigh and a, “Maybe next year.”

It’s not just about the boats, boat toys, or even Annapolis, which is worth a visit any time of year. It’s the relaxed atmosphere and the type of camaraderie, where there are no strangers. There are just fellow sailboat junkies we haven’t met.