The Kite Runner ~ by Khaled Hosseini: 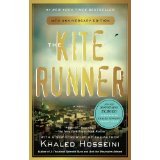 So Disturbing and Inspiring, You Can’t Switch It Off

Betrayal, guilt and a chance for redemption are the themes that flow like blood through this 2003 novel about fathers, sons, friends and 30 years of the tragedy that is Afghanistan.

The summer of 2006 found us traveling back and forth between Atlanta and New Bern several times, as we solidified our plans to relocate in October. This might have been a good time to read mysteries and thrillers, but there were books I had committed to finish for my book club, and Simon was willing to share my reads.

The Kite Runner turned out to be one of those books that grabbed you by the heart and didn’t let go until the last sentence.

The story is told in the first person, by Amir, and begins when he was a boy growing up in Afghanistan in the 1970s. And although Amir may have been the protagonist, he was no hero. In fact, he was nothing more than a spoiled brat.

The book is divided into three parts. The first takes place in an affluent neighborhood of Kabul. Amir, and Hassan, the son of Amir’s father’s servant, are inseparable friends, despite their social and tribal differences. They spend much of their free time engaging in the popular sport of kite fighting. Hassan is Amir’s “kite runner”, and has an uncanny ability to predict where the kite will land, giving him a head start on retrieving it.

Amir’s father – Baba – loves both boys, but is particularly critical of Amir. Needing a more sympathetic mentor, Amir turns to Rahim Khan, his father’s closest friend, who encourages his interest in becoming a writer.

Then Amir wins the local kite fighting tournament, setting into motion events that will leave no one unaffected.

As Hassan retrieves the last cut kite, the trophy, that may finally win Amir Baba’s approval, Hassan is beaten and raped by the local bully, Assef in an alleyway.

In spite of his humiliation, Hassan steadfastly holds on to the kite for Amir. Meanwhile, Amir is hiding from Assef and witnesses the horror. Too cowardly to come to his friend’s aid, Amir slips away, goes home and pretends nothing out of the ordinary has happened.

Baba’s long yearned-for praise is lavish, but cannot compensate for Amir’s overwhelming feelings of guilt. Deciding that Hassan’s departure would be the solution to his problem, he commits the ultimate betrayal by setting his friend up as a thief.

Five years later, Baba and Amir are fleeing the Soviet invasion of Afghanistan. They manage to escape to Peshawar, Pakistan, then make their way to a small Afghan community in Fremont, California.

The second part of The Kite Runner spans the next 20 years of Amir’s life in the United States: his adjustment to the contrast between his former life of privilege and the run-down apartment he shares with his father, Baba’s job at a gas station, Amir’s graduation from high school, his writing classes at a local community college and his marriage to Soraya, a fellow Afghan immigrant.

By 2000, Amir is a successful novelist, but after 15 years of marriage, he and Soraya are still unsuccessful at having children.

Then comes a call from a dying Rahim Khan, offering Amir a chance to come to terms with the guilt that has never left him. “There is a way to be good again,” Khan tells him, and despite the danger he knows awaits him, Amir is off to Afghanistan to rescue Hassan’s young son, Sorab, from the clutches of the Taliban.

The third part of the book takes place in Taliban-controlled Afghanistan, where Amir traces Sorab to an orphanage, only to learn that a man recently gave the orphanage money and took Sorab away. This man turns out to be none other than the sadistic Assef, the neighborhood bully now turned Taliban executioner.

To no one’s surprise, there is a confrontation between somewhat good and pure evil. But it is who becomes the unwitting hero.

The Kite Runner is the kind of book that stays with you long after the reading is over. Not only does the book explore the complexities of relationships, you also get a glimpse into life in Afghanistan during and after it was a monarchy, as well as the suffering of its people under the horrendous abuses of the Taliban.

The characters are compelling, and the writing is rich with emotion.

The film, The Kite Runner, is definitely worth a watch, but it doesn’t hold a candle to the book.

More than a decade after reading The Kite Runner, the story is still fresh in my mind, as is my sorrow for the people of Afghanistan, then and now.