Thanjai a Neighborhood Restaurant in Montreal 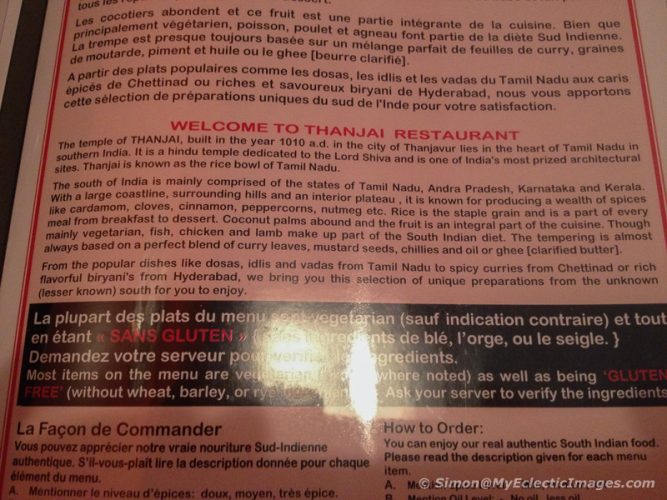 During a visit to Montreal, Simon, Otto and I discovered Thanjai Restaurant. In previous posts, I advised my readers to, “look for the surprises.” Well, since I’m always on the look-out for the unexpected, it’s no surprise that we found another gem when we least expected it.

The night we arrived, Simon and I decided to indulge ourselves in Indian food for dinner. After wandering around the neighborhood where our Airbnb was located, we  found ourselves at Thanjai Restaurant, the first eatery in Montreal specializing in the rich flavors and exotic dishes of South India, looking forward to trying something new, we settled in for a sampling of dishes that tasted as spectacular as they looked and smelled.

Thanjai Restaurant is located near the corner of Van Horn and Victoria, two busy streets in Montreal’s Cote de Neige area. The decor in the main restaurant is neutral, with tables and booths that seat 70 diners. If not for the high ceiling, you could almost call it cozy. There is also a banquet room downstairs that will seat up to 100.

A display of the spices used in South Indian cooking caught our eye, and gave us a mouthwatering preview of what was to come: Ginger, garlic, black pepper, coriander, cinnamon, cumin, cardamom, fennel seed, turmeric, saffron, cloves and fenugreek.

Another positive sign was that most of the diners were of Indian extraction. To us, that’s a good omen for the food being authentic and delicious. The ethnicity of the majority of the diners in a restaurant is one of the criteria upon which we rely before venturing into a new culinary experience. We also look at vehicles parked at the target eatery. Pick-up trucks will encourage us to try a barbecue place, but not fancy foreign cars. Since parking is at a premium in Montreal, looking at the vehicles on busy Van Horn Avenue would have been no help at all in this situation.

Before we even ordered, we had decided that the warm aromas emanating from the kitchen, and the unfamiliar, yet tantalizing offerings on the menu made sharing this great find with you a no-brainer.

For our appetizer we shared an order of Masala Vda, described as, “crispy fried lentil doughnut with onions, green chiles and curry leaves, served with chutney. What the dish turned out to be was two lentil cakes that, according to Simon, looked more like Indian hush puppies. The texture was crunchy, with a soft interior containing some distinguishable pieces of lentil. They were somewhat dry, but moistened up quickly with the addition of the chutney, which was more like a thin yogurt sauce. But it was the flavor that stood out: spicy, but not uncomfortably hot, allowing the blend of seasonings to give your mouth a wake-up call.

We ordered two main dishes to share. The lamb curry came without rice. In fact, unlike most Indian restaurants, the tempting variety of Thanjai’s rice dishes need to be ordered separately. Since we also shared an order of Chapati – whole wheat flat bread – we made good use of it mopping up the rich savory sauce.

Lamb Curry with a Side Order of Chapati Served at Thanjai Restaurant (©simon@myeclecticimages.com)

The lamb was tender, and served in chunks, bone and all. The sauce had a different tone and taste from more familiar curries, because of the unique South Indian spice treatment. It was so good, we used our spoons to get up what the Chapati couldn’t.

The second dish we shared was interesting as it was delicious. Pav bhaji Dosa, a paper thin crepe, prepared from a batter made with finely ground rice. It is fried crisp in an 18 inch diameter pan, spread with the desired filling (in our case, mixed vegetables) and carefully rolled.

The dish is served with three distinctly different, but artfully seasoned warm dipping sauces. After breaking off pieces of the crisp edge and dipping them in the sauces, you pour the remains of your favorite sauce over the remainder of your dosa, and take a knife and fork to it.

Thanjai Restaurant also prepares six foot Dosas, the largest available in North America. These would make a delightful change from your standard massive Italian sub for your next party.

By the time we had finished our meal, we were pleasantly full, and ready to leave. But I just had to ask the owner a few questions, so I could tell you about this wonderful restaurant find in Montreal. That was when the evening took an even more interesting turn.

Kumar Muthukrishnan, who opened Thanjai Restaurant in 2012, turned out to be a most fascinating and gracious host. When he came to Montreal, it was as a banker, and a full-time banker he still is. The restaurant is a family business, the first one in the family, and with their support, Kumar can have the best of both worlds.

Kumar grew up in Thanjai, and named his restaurant after his home town. The dishes his kitchen prepares are made from family recipes going back generations. Although Kumar is not a chef, his staff is trained in the preparation of authentic South Indian cuisine.

We asked Kumar about the difference between South Indian and the more familiar North Indian cuisines. He told us that different regions in India use different spices in their cooking.  North Indian dishes tend to be creamy, making lighter, simpler South Indian food more healthful. Also, whereas tea is the beverage of choice in the north, coffee is grown and consumed in the south.

We were surprised when Kumar told us that his clientele is mostly non-Indian. Contrary to the ethnicity of the diners we had seen when we entered, the makeup of Thanjai Restaurant’s customers is only approximately 20 per cent Indian. The rest is comprised of folks who like to try something new, as well as those who did, and are now addicted. Unlike many Indian eateries that offer several levels of heat in their dishes, Kumar refuses to compromise authenticity in the preparation of his food.

After Kumar had patiently answered all my questions, he invited us to sample some coffee and dessert. Sensing we were about to experience something out of the ordinary, we accepted his kind offer.

Our intuition didn’t let us down. The coffee was served in two metal cups, the smaller one resting like an island in the center of the larger.

A Double Dose of Coffee (©simon@myeclecticimages.com)

The contents of both cups was identical. You can use a spoon to drink your coffee, or lift the smaller cup out and drink it first. If you choose the latter approach, be aware that you’ll drip coffee from the outside of the cup. This is where the saucer comes in handy.

The coffee was slightly Frothy, like a South Indian style Cappuccino, only the milk is stirred into the coffee before serving. The flavor was strong but not bitter. It was excellent on its own, but a small amount of sugar intensified the flavor.

The dessert Kumar selected for us to try was called Ashoka. It was served warm, and resembled cake, but was softer and not overly sweet. It consisted of cooked cream of wheat flour, lentils and clarified butter called ghee. The dessert was flavored with cinnamon and cardamom, giving it a warm spiced flavor. It was one of the most unusual and delicious desserts I had ever tasted.

Montreal is an interesting place to eat. There is no end to the variety of ethnic restaurants available in which you can find every authentic cuisine you can imagine. Having grown up in this foodie paradise, I can recommend Thanjai Restaurant as one of the best casual dining experiences you’ll find in the city.

Thanjai’s hours of operation aren’t necessarily intuitive, so pay close attention. You definitely don’t want to experience the torture of turning up when the restaurant is closed.