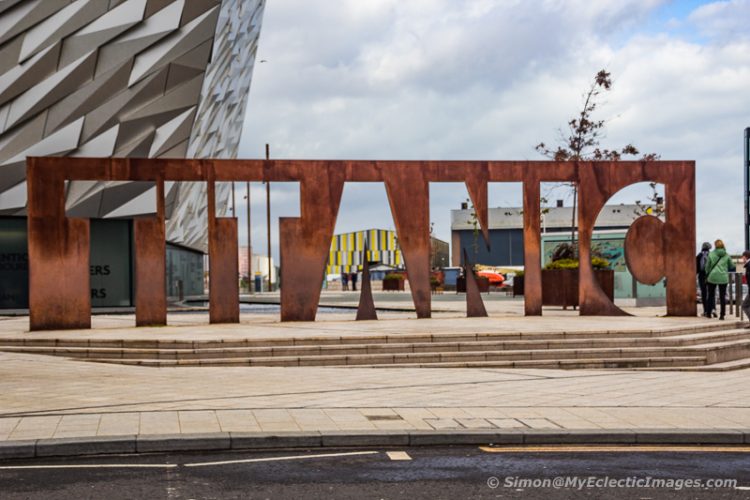 The story of the ill-fated maiden voyage of RMS Titanic has been the subject of books, poems, films, documentaries, theatrical productions, and much speculation. Most focus on the final hours of the doomed ship and her passengers, but before Titanic’s end, her story had a beginning and a middle. In this two-part series, You will see her birth in Belfast, Northern Ireland and the location of her last port of call in Cobh, Ireland before she disappeared over the horizon for the last time.

On a gloomy, rainy September morning, Simon, Otto and I had the privilege of touring Titanic Belfast. Much more than a museum dedicated to a tragedy, this mammoth attraction brought Titanic to life. Nine highly interactive, painstakingly accurate, and at times, soul-wrenching  exhibits beckoned us to take our time  and explore.

Titanic Belfast is located at the dry dock where the supposedly unsinkable ship was built and launched. The attraction opened in the Spring of 2012, revealing the complete story of the mighty White Star Line ship’s birth and subsequent demise.

There is far more to Titanic than her tragic sinking, and when we walked through the doors of Titanic Belfast, we embarked on a complex journey that placed us in the center of her triumphant beginnings.

Titanic Belfast is situated on Queen’s Island, located at the entrance of Belfast Lough, an area of land which once had been under water until it was reclaimed in the mid-19th century. There, the shipbuilding firm of Harland and Wolff constructed enormous slipways and graving docks where Titanic and her sister ship, Olympic, were built simultaneously.

View of Titanic Belfast from the Dry Dock (©simon@myeclecticimages.com)

Another tip-of-the-hat to Titanic involves the ticket counters, which are constructed from large wooden blocks designed to resemble those used to bolster and keep her upright during construction. It should come as no surprise that the building’s capacity of 3547 visitors, is the same number as the capacity of Titanic!

Had we visited Titanic Belfast on a sunny day, the building would have sparkled with more than 3000 individual anodized aluminum silver-toned shards on panels that comprise most of its façades.

Our experience began with an hour-long tour that covered areas both inside and outside the Titanic Belfast building. Our guide, Johnny, deftly interwove human stories with facts about Titanic’s construction and departure from Belfast. He left us in front of a massive glass pane looking down on Titanic’s outline in white on the concrete slipway below.

View of the Slipway Where Titanic was Built (©simon@myeclecticimages.com)

Once we were able to tear ourselves away, we took our time exploring six floors containing nine interactive exhibit galleries that transported us from Titanic’s construction to her sinking and beyond. In chronological order, the events of Titanic’s story were integrated with Belfast’s industrial history during the early part of the 20th century.

Each exhibit captured our imaginations as well as our attention and gave us much to ponder. Here is a small sample of what we experienced.

An indoor cable car carried us around a replica of Titanic’s enormous rudder and through projections of some of Titanic’s construction stages. Realistic sound effects such as the cacophony created by hundreds of workers pounding rivets into the ship’s hull assaulted our ears. We experienced how Titanic must have felt from a height of 66 feet, realizing the original gantry was four times the height of the replica. It took three years and 3,000 men to build Titanic.

on May 31, 1911, approximately 100,000 Belfast residents, visitors and members of the press gathered to witness Titanic’s launch. In the Launch Gallery, scenes and sounds from that day gave me the sense of being in the middle of the excitement. A woman’s voice shouted, “She’s in,” heralding the moment when Titanic slipped into Belfast Lough. Because of the sloping slipway from which Titanic was launched, the ship took a fraction over a minute to transition from land to sea.

We explored the exhibit gallery devoted to Titanic’s sinking with sounds in the background of SOS messages in Morse code being sent from the crippled vessel to other ships. The combination of images and audio of survivors’ stories gave me chills. The unspeakable terror of the night of April 14, 2012 crashed in on me. It seemed so real, I felt as if I could almost reach out and touch the icy water of the North Atlantic.

We had an oddly humorous moment in the last gallery, which depicted Titanic in her final resting place 12,000 feet below the surface of the ocean. The scene was covered with transparent glass upon which visitors walked. The idea of stepping on the virtual watery graves of so many might have given me the shivers had Otto not stubbornly refused to take me on to the glass. In his beautiful mind, this was a dangerous situation, and he was determined to protect me. A little coaxing and the sight of others traversing the perceived danger zone without falling in finally got him moving again.

After exploring the exhibits in the Titanic Belfast building, we took a short walk to Hamilton Dry Dock, where Nomadic awaited us. Nomadic was the original tender that transported passengers out to where Titanic was anchored. The vessel had been meticulously refurbished and was in remarkable condition. The ornate plasterwork and original wooden bar reflected her glorious past and gave us the opportunity to experience what Titanic’s passengers saw and felt as they unknowingly set out on what, for many, was to be their last journey.

Nomadic is the last remaining White Star Line ship. She was constructed in 1911, alongside Titanic. The fact that she was exactly a quarter the size of her enormous neighbor was no coincidence.

Nomadic saw active service in both World Wars, shuttled thousands of passengers to gigantic trans-Atlantic ships for over five decades, and was used as a restaurant and party venue for 30 years while moored beside the Eiffel Tower in Paris.

Now, back in her birthplace at Titanic Belfast, Nomadic welcomes visitors with her own magnificent story. Recorded voices spoke to us as if we belonged there. It was easy to imagine the excitement the passengers must have felt as the view of Titanic grew larger and more imposing as Nomadic approached. The luxuriously appointed Nomadic surely helped passengers prepare for what they would find when they boarded Titanic. For me, the experience was both fascinating and haunting.

Hologram of a Bar Tender on Board the Nomadic (©simon@myeclecticimages.com)

We spent nearly an entire day at Titanic Belfast, but the hours flew by. Some other areas we explored included:

Sculpture of a Diving Woman in Front of Titanic Belfast (©simon@myeclecticimages.com)

One of the Drawing Offices of the Old Harland and Wolff Building that has been Converted to a Bar for the Titanic Hotel Belfast (©simon@myeclecticimages.com)

Titanic Belfast is fully accessible with the possible exception of the cable cars, which may not be able to accommodate certain large wheelchairs.

Of course, there is a gift shop, which sells books, posters, local food items, and souvenirs. The shop’s inventory is of a higher quality than most.

Disclaimer: We were generously hosted by Titanic Belfast. However, all opinions, as always, are entirely my own.

The second article in this series will feature The Titanic Experience in Cobh, Ireland. This attraction marks Titanic’s final departure point and the spot from which the last 123 passengers were ferried to the ship before heading out to the North Atlantic, bound for New York.