The Tower of David Night Spectacular: 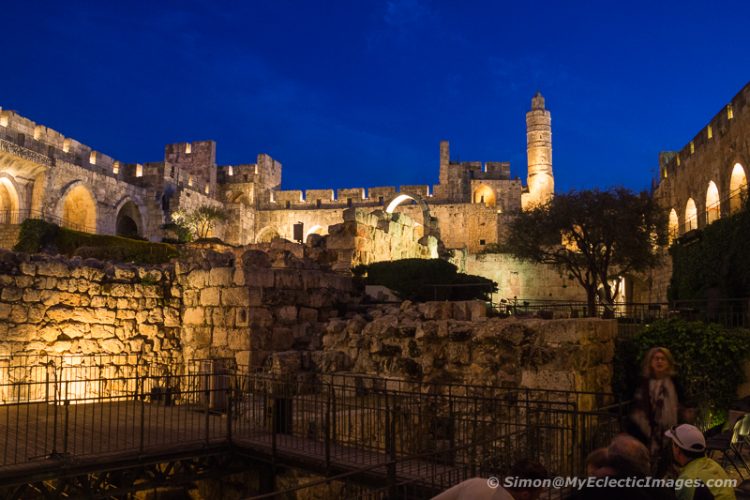 Four Thousand Years of Jerusalem’s History in Sound and light

The Old City of Jerusalem has had me under its spell since the first time I walked its ancient stones in 1971. We were treated to new aspects of the city on three separate pre-conference tours while in Jerusalem for the TBEX (Travel Bloggers Expo) International 2017. Each tour covered some of the same ground, but offered entirely different perspectives. Our second visit to the Jerusalem Citadel took place after dark, and introduced us to a chronological history of the city through the Tower of David Night Spectacular, a stunning sound and light extravaganza.

Courtyard of the Tower of David Prior to the Night Spectacular (©simon@myeclecticimages.com)

The Tower of David

We caught our first view of the ancient citadel, also called the Tower of David, on a sunny morning upon entering the Old City via the Jaffa Gate. This medieval fortress is a historical and archaeological site, where Jerusalem’s tragic and triumphant past is still being uncovered. We climbed to the top of the tower, with a stunning 360-degree view of the Old City. In the distance, we could see the new Jerusalem, and observe the stark contrast between old and new, ancient and modern.

Contrary to popular belief, the Tower of David has nothing whatsoever to do with the biblical king whose name it bears. The misnomer resulted from an error made during the Byzantine period by Church fathers, who misinterpreted the written words of Josephus Flavius. They mistakenly attributed a Herodian tower to King David. Muslims later reinforced the myth of this connection. When westerners arrived in Jerusalem in the 1800s, Tower of David’s identity was shifted to the minaret, which had been added to the Mamluk Mosque by the Turks.

Riveting virtual reality scenes, realistic sound effects and haunting music from nearly four millennia were being projected all around us upon the ancient stone walls of the Citadel. Giant image after giant image carried us along from Jerusalem’s beginning to the present.

The Tower of David Before the Start of the Night Spectacular (©simon@myeclecticimages.com)

We had been fortunate to have been invited to see the show twice – once as part of our TBEX conference, and the other as part of a reception for visiting attendees from an international conference on accessibility. Rather than being bored the second time around, we were able to hone in on segments of the show that had stood out for us. And I wouldn’t hesitate to experience this extravagant multi-sensory display a third, and even a fourth, time.

A Scene from the Night Spectacular at the Tower of David (©simon@myeclecticimages.com)

The complex technology used to choreograph the Tower of David Night Spectacular is beyond me, but the combination of 20 projectors, 10 video players, 14 computers and 14 speakers produced a magical effect. To no one’s surprise, it took 10 kilometers of cable and two projection rooms to pull it all together. The show was created in France by the Skertzo company, with original music composed by Etienne Perruchon.

Another Scene from the Night Spectacular at the Tower of David (©simon@myeclecticimages.com)

A Third Scene from the Night Spectacular at the Tower of David (©simon@myeclecticimages.com)

The Tower of David Museum

Following the second show, Simon and several others took advantage of the opportunity to climb the tower for some night photography. Unfortunately, this left us no time to visit the Tower of David Museum, located within the Citadel.

Instead of the usual endless rows of glass display cases, the Tower of David Museum utilizes digital technologies, games and apps that enable visitors of all ages to experience Jerusalem’s history; from nearly 4,000 years ago until it became the capital of Israel. I vowed the next time we are in Jerusalem, a chronological voyage through the history of this magnificent city will top our list of things to do.

I was pleasantly surprised and impressed by the museum’s commitment to eventually making the entire citadel complex accessible to wheelchairs. Although ramps have made the courtyard where the Night Spectacular takes place and the museum accessible for wheelchairs, this is not yet true of the tower. Plans are being discussed to make the entire Citadel accessible to all. This will be a daunting task, but, through conventional or unconventional methods, the museum staff and volunteers will succeed.

The Tower of David Night Spectacular was created eight years ago, and was the first of its kind. Now, there is a new production in the works that promises to be even more stunning and engaging than the current production. Based on what we saw, the current Tower of David Night spectacular will be a tough act to follow. When the new show is ready for its debut, We’ll have yet another reason to return to Jerusalem.

Take a walk through the courtyard prior to the Night Spectacular. Touch Roman stones inserted in walls erected by the Crusaders, and prepare yourself for a trip through Jerusalem’s 4,000 year history.

Visit the website for more information, hours and ticket prices for the Tower of David Night Spectacular.

Disclaimer: Our Tower of David Night Spectacular experience was provided through the generosity of the Tower of David Museum. However, all opinions, as always, are entirely my own.