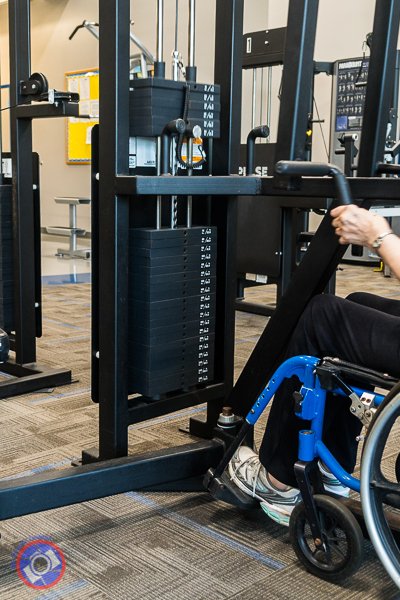 When it comes to inclusion, this facility leaves no stone unturned.

(In my July 13 post, “F” is for Fort Wayne, I promised a detailed account of our visit to Turnstone Services and Facilities. So without further ado, here is the story of this shining jewel in Fort Wayne’s crown.)

Upon our arrival at Turnstone, Tina Acosta, Director of Outreach, greeted us. Over the next two hours, she introduced us to all this groundbreaking facility had to offer. During our tour, we came upon one innovative surprise after another. As our awe intensified, so did our respect for the services available for individuals with disabilities of all ages and with every kind of physical challenge imaginable.

We began our tour in the 125,000 square foot Plassman athletic center, which was constructed as an addition to the Turnstone facility in 2015. There, Tina introduced us to what a truly inclusive fitness center could be: regular and warm water pools, adapted treadmill, and stationary bicycles.

A giant court that can be partitioned into four separate areas, a 230 meter (755 foot) track circling the entire perimeter of the court, and anything else one could possibly imagine for individual and team activities. In this magical place, everything necessary for maintaining a desired level of fitness is available and accessible.

The center is equipped with bleacher seating that can accommodate 500 spectators to watch competitive events such as wheelchair basketball and tennis, power soccer, sled hockey, goalball, and more. Turnstone also rents out the courts for outside team practices and tournaments. The latter, plus revenue from the onsite concession stand, provide additional funding for Turnstone’s work.

I was particularly fascinated by the power soccer equipment. Tina showed us a bar that attaches to the front of a power wheelchair. This enables players to push the oversized ball used in the game around the court. If this sounds easy, I can assure you it is not.

From Seeds of Change to Blossoming Possibilities

Turnstone began its work in 1943, bringing home education to children with disabilities who could not attend public schools. A therapy component was soon added. The facility continued to steadily change and grow over the decades.

Today, Turnstone offers adult daycare, a memory care unit for adults with Alzheimer’s or other forms of dementia, pediatric and adult physical, occupational, and speech therapy, an equipment loan program for those in need of wheelchairs, walkers, shower chairs and such, licensed daycare, and a host of other services under one roof. It’s no wonder Turnstone has become a national and international model.

The city, along with Visit Fort Wayne collaborate in an ongoing effort to attract and host national and international tournaments. Among other achievements, their efforts have resulted in USABA (United States Association of Blind Athletes) National Goalball Team living and training in Fort Wayne.

So, What is Goalball, Anyway?

The game of goalball was created in 1946 in order to provide World War II veterans who had sustained vision loss with a challenging and accessible sport to help maintain physical fitness. Today, goalball is a premier team sport for athletes who are blind and is played in 112 countries. Goalball made its debut as an official Paralympic sport at the 1976 Summer Paralympic Games in Toronto and is currently the most popular team sport among athletes who are blind.

Goalball is played with two teams of three facing each other across a designated court. Players attempt to roll a ball the size of a basketball over the opponent’s goal line. The ball is hollow and contains bells, enabling players to listen for and locate it in order to stop and take control of the ball. Since no two people who are blind see alike, blackout goggles are used so as not to give players with light perception or residual vision an unfair advantage over their totally blind counterparts.

Goalball requires excellent listening skills, quick reaction times, and a high level of fitness. In order to play competitively, an athlete needs to understand strategic concepts, and must be a committed team player.

Tina ushered us into the U.S. Goalball team’s training room, and introduced us to Jake, a coach, and Cal, one of the players on the men’s team. It was clear they were anxious to get back to competition. Had it not been for the postponement of this year’s Summer Olympic and Paralympic Games thanks to Covid19, they would have been in Japan instead of chatting with us.

Cal holds a bachelor of arts degree in recreational therapy and is close to earning his master’s in healthcare administration. Although the athletes can participate in a residency program with some meal support, they must either be working, volunteering, or going to school in order to qualify.

Goalball is the only Paralympic sport that doesn’t have an Olympic equivalent. This makes sponsorships much harder to obtain.

Before we left Turnstone, Cal graciously agreed to give us a brief demonstration of how goalball is played. Considering he accomplished this minus two teammates and an opposing team, he did an excellent job giving us a peek into the mechanics of the sport.

During our time in Fort Wayne, we discovered firsthand that the city walks the talk when it comes to striving for full inclusion. There is no doubt Turnstone is a valuable team player in this effort.

Disclosure: Our sincere thanks go out to Visit Fort Wayne for their generosity in hosting us. However, all opinions, as. always, are entirely my own.