Make a Viking Splash in Dublin: 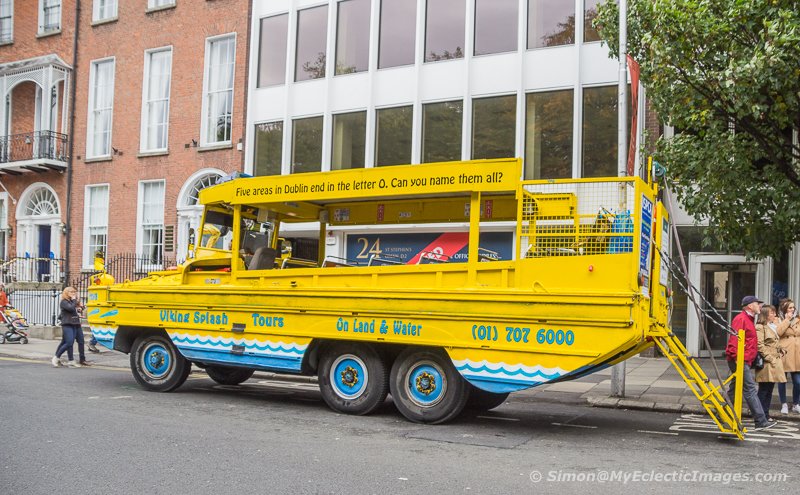 Family Fun on land and water.

The weather was damp, cloudy with occasional showers – a typical day in Dublin – and we were going to be on the water as part of our Viking Splash Tours adventure. One way or the other, “waterlogged” was the operative word.

When Simon, Otto and I began our Viking Splash tour by boarding a DUKW – a World War II amphibious transport vehicle – we knew we were in for a treat. The 28-seat bright yellow open-sided vehicle was tall, wide and totally out of place among the cars, buses and bicycles it passed along its Dublin route. But once underway, the DUKW owned the road.

For over an hour, our charming Viking-clad guide entertained us with history and humor while encouraging us to raise our hands and roar at passersby. The young children loved it, as did the older kids like us.

Our Viking Splash Tour took us past many of Dublin’s well-known sites: Trinity College, Christ Church Cathedral, Viking Dublin, Medieval Dublin, Georgian Dublin, Government buildings, the Dublin Docklands and more. The narrative was half historical fact and half corny humor. Despite the threatening weather, we couldn’t help but smile.

A Full Load of Temporary Vikings Aboard the Viking Splash DUKW (©simon@myeclecticimages.com)

In true sturdy Viking fashion, tours run rain or shine. We weren’t worried about getting wet, though. Unless you were seated in the last eight rows, you had a canvas roof under which to shelter from the rain, and rain ponchos were made available on the Viking Splash Tours for all passengers.

When the DUKW arrived at the dock for the water portion of the Viking Splash Tour, we were all required to don life jackets. Floatation devices were attached to the sides and in we went. In fact, the water wings were never used when the DUKWs were employed in the military but were an added precaution to provide an extra layer of safety.

Our transition from land to water was barely noticeable. The sounds and smells of Dublin gave way to a change in the DUKW’s engine and water moving around us. The humor-punctuated history lesson continued as we maneuvered through the water of the Grand Canal until we were once more on dry land.

Buildings Lining the Waterfront of the Grand Canal and Seen from the Viking Splash DUKW (©simon@myeclecticimages.com)

History of the Lucky DUKW

In the 1940s the DUKW was built and utilized for the purpose of transporting men and equipment from ship to shore and back again. Often used to transport wounded soldiers from land to hospital ships, missions of mercy were also on the DUKWs agenda.

The DUKW weighed 13,000 pounds empty and moved at a whopping 50 miles per hour on the road. On the water it made 5.5 knots per hour. It measured 31 feet in length, 8 feet 3 inches in width and 8 feet 9 inches high with the canvas top in place.

In World War II the DUKWs were used in the Sicilian invasion in the Mediterranean and played a prominent role on the beaches of Normandy on D Day. When the Korean War broke out the United States military deployed several hundred DUKWs to bring supplies ashore during several key battles.

Originally designed as a military vehicle, the DUKW made a smooth transition to civilian life. Police and fire departments, as well as rescue units, pressed these multi-purpose vehicles into service. They were present during rescue efforts for the Great Flood of 1993, and Hurricane Katerina in 2005, maneuvering through flooded neighborhoods and transporting individuals and families stranded on their rooftops.

Today, the DUKWs have found a new career as tourist transports for companies such as Viking Splash Tours.

If you’re looking for a deep dive into the history and culture of Dublin, you might want to give this one a pass. But if you’re after a lighthearted outing with the kids, grandkids or your silly self that will put a goofy grin on your face, Viking Splash Tours will hit all the high notes. Besides, having fun is good for your health, and this kind of fun is just what the doctor ordered.

A Derelict Ship in a Bay Off the Grand Canal (©simon@myeclecticimages.com)

Disclaimer: Our heartfelt gratitude goes out to Failte Ireland for hosting us during our time in Dublin. However, all opinions, as always, are entirely my own.