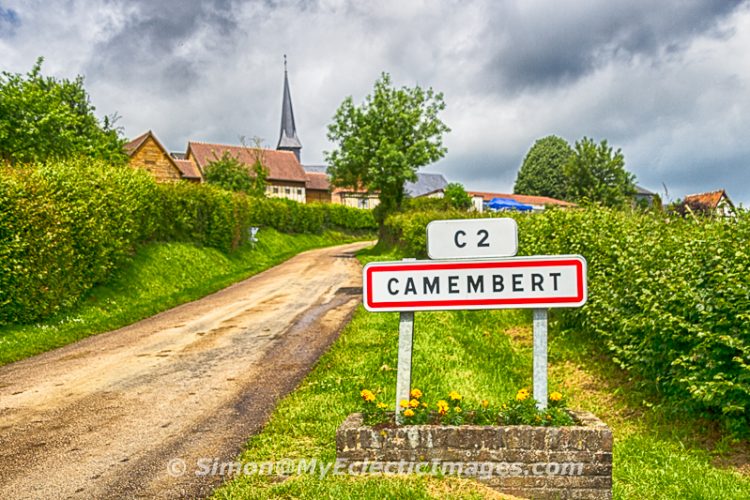 Two of the Cheesiest Villages in Normandy.

The Camembert was at it’s peak: smooth and creamy on the inside with a firm skin. I took a bite. The flavor was mild with a slight tang. Once upon a time it would have been pure perfection. But that was before I tasted Camembert de Normandy in Camembert, Normandy.

Simon and I had a gastronomic awakening when we visited this region of France earlier this year. We saw how Camembert was made, using techniques and equipment similar to those of the 18th and 19th centuries. We compared samples of Camembert made with both pasteurized and unpasteurized milk. And we discovered Livarot, another soft cheese, which transformed our gentle Camembert awakening into a jarring jolt. Since then, no domestic Camembert has even come close to our experience, and we haven’t even been able to find Livarot.

On a damp, dull morning, punctuated by the occasional drizzle, Simon, Otto and I arrived at Fromagerie Durand, a short drive from the village of Camembert. We began with an introduction to the source of all good cheese: the cows. Norman cows are the milk producers of choice in the area, and are recognizable by their dark brown color, white stomachs, and faces with dark brown, or sometimes black, surrounding the eyes. Their rich milk results in superior dairy products. This sturdy bovine was bred into existence during the 19th century, and thrives on the region’s temperate climate and lush spacious pastures in which to graze.

The entire scene was about as rural as it gets. That farm smell. (you know the one I mean), cows ambling out of the barn to graze, And a cacophony of birdsong, in spite of the threatening sky. I attempted to capture the sound of the cows mooing, but by the time my digital recorder was ready, the cows had stopped talking and started emptying their bladders. At first I thought it was a high-power hose. Once the truth had been revealed, however, I didn’t think the recording would be welcome on this blog, or anywhere else, for that matter.

Next came a self-guided tour around the exterior of the Camembert production facility. Large windows enabled us to observe the process by which fresh milk is transformed into those familiar rounds of luxurious Camembert. Explanatory information was posted at every station, and we were able to watch and learn without disrupting the workers.

One of the Explanatory Placards Describing the Cheese Making Process at Fromagerie Durand (©simon@myeclecticimages.com)

Considering the glorious end result, the process is surprisingly simple. Milk from the morning and night before are combined and heated to a temperature of 86 degrees F. A starter is then added to curdle the milk, which takes approximately 90 minutes. The yogurt-like substance is ladled into cylindrical molds, the same circumference as a round of Camembert, with drainage holes. The table on which the molds stand is slanted, allowing the whey to run into a trough. When the amount in the molds is reduced to a third, the molds are then turned over, and the cheese turned out to be sprinkled lightly with salt, and sprayed with penicillium, a non-toxic white mold, also used on Brie and other similar cheeses. The Camembert is left to dry for a week, allowing the rind to form. Then it’s off to the aging room, where the rounds are placed on wooden shelves. The entire process takes three weeks, after which time the cheese is ready to be packaged.

This is how it was done from the beginning, and this is how it is done today on farms like Fromagerie Durand. Most of today’s Camembert, however, is created with modern machinery. Either way, producers must make their cheese from unpasteurized milk, in order to label their product Camembert de Normandy. If the milk is pasteurized, it’s just plain Camembert.

We fell in love with Camembert de Normandy in the tasting room. The flavor was mild and had that pleasant familiar tang, and the rind was slightly crumbly. But the intensity of flavor was similar to looking out on a spring garden through a picture window after a winter’s worth of soot and dirt has just been cleaned off.

So, how did this intensely flavorful cheese come to be? Well, if you believe the most popular story, it was Marie Harel, a farmer’s wife, who began making Camembert in 1791. A priest arrived in Camembert from the Brie region. Seeking shelter from the violence of the French Revolution. Marie took him in, and was rewarded with his knowledge of cheese making. Coupled with what she already knew, Marie began to produce and package her cheese in the small round boxes we now know and love. Marie’s tale makes for a good story, but has been disputed by those who believe Camembert was already being produced in the 17th century.

Meanwhile, back in the tasting room, we were just coming to terms with the difference between what we had just experienced and what we thought we knew about good Camembert, when we had our first taste of Livarot.

Once out of the bottle, our foodie genie couldn’t, and wouldn’t be put back. So, we followed it and our noses to the nearby village of Livarot to learn more.

Antique Truck Outside the Cheese Factory in Livarot (©simon@myeclecticimages.com)

What we found was E. Graindorge, the total opposite of Fromagerie Duran. Instead of a rustic setting where cheese was made the old fashioned way, we were swallowed up by a shiny modern facility where the view through the glass was not of workers making cheese by hand, but that of robots making cheese by machine. The scene was impressive, but sterile in comparison to our experience down on the farm.

Like Camembert, Livarot is round and made from cow’s milk, but that’s where the similarity ends. The, earthy flavors are stronger, and the texture denser and more gelatinous than that of Camembert. The, uh, fragrance of Livarot falls under the category of ‘stinky’, but by no means the ‘stinkiest’. The cheese is slightly taller, and is encircled by five strips of raffia, resembling colonel’s stripes. Hence the nickname Le Colonel. Also different from Camembert is the aging process. Livarot takes two to three months to fully ripen, and can be on the runny side at room temperature.

With Otto, Visiting a Modern Cheese Factory in Livarot (©simon@myeclecticimages.com)

One of Normandy’s oldest cheeses, Livarot first appeared in the late Middle Ages. By the 19th century, the cheese was known far and wide for its small holes and springy texture, slightly nutty flavor and melt-in-your-mouth sensation.

E. Graindorge produces Livarot and Camembert, as well as other cheeses. We tried several, and purchased a round of Livarot to go along with the two Camemberts from Fromagerie Durand.

We thoroughly enjoyed our cheeses over the next few days, accompanied by fresh baguettes, on outdoor, car and room picnics. Saving the Liverot for last seemed like a good idea at the time, but it stunk up the rental car something awful!

It may come as a surprise, but, most of the Camembert we buy doesn’t come from Camembert or even Normandy. Early cheese makers were so busy, well, making cheese, they didn’t protect the Camembert name by obtaining an appélation d’origine controlée (AOC), This designation, given to wines, cheeses, and other, items essential to life, is based on geographical and other considerations. In 1983, however Camembert de Normandie was born with the granting of an AOC, and nine years later, a Protected Designation of Origin. Now, the only real thing is Camembert de Normandy, made from unpasteurized milk.

It is legal to bring cheese into the U.S., but it must be made from pasteurized milk. So, instead of packing every nook and cranny of our luggage with small round boxes, we took only our deliciously cheesy memories.

Camembert has a 45 per cent fat content, but a little goes a long way. Try it with crusty fresh bread and another Normandy speciality, Calvados.

Like Camembert, Livarot comes in both pasteurized (red banded) and unpasteurized (raffia bands) forms. Keep this in mind if you plan to bring some home with you. And make sure you wrap it as tightly as you can, or you may have issues with your fellow passengers.

This cheese has 40 per cent fat content, and is at its finest when paired with a full-bodied red wine, Calvados or hard cider. And don’t forget the crusty French bread.