Want an Introduction to English Wine? Look No Farther than a’Beckett’s Vineyard 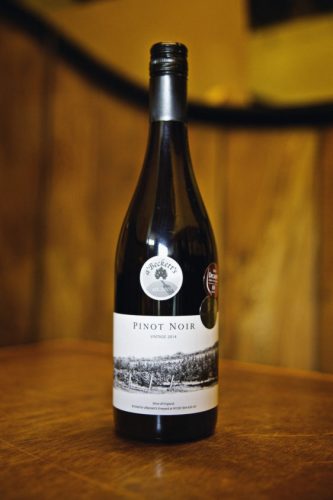 There are many excellent reasons to visit Wiltshire, England: Salisbury Cathedral, Stonehenge, Avebury Circle, and that’s just for starters. But, if you like trying new English wine, make sure you include a tour of A’Beckett’s Vineyard in your plans. Here’s why.

A Delightful Way to Discover Something New – English Wine

On a grey Wiltshire morning, Simon, Otto and I ambled over to near-by a’Beckett’s Vineyard after our sumptuous Littleton Lodge breakfast. We were greeted by Paul Langham, who, along with his wife, Lynn, own and operate the vineyard and produce fine English wine.

Paul, a charming Brit with a dry sense of humor, graciously showed us around, and shared his story.

The main field of a’Beckett’s Vineyard consists of 15 acres, 11 of which are dedicated to grape vines. The rest are apple orchards, from which comes the intensely flavored apple juice we enjoyed earlier that morning at Littleton Lodge. Several types of apples are grown for a variety of uses besides juice: cooking, cider making and other scrumptious pursuits.

Part of the a’Beckett Vineyard (©simon@myeclecticimages.com)

The Langhams produce their own juice and cider onsite. They own a community apple press for area residents with loads of apples. The growers bring apples, and a’Beckett presses the fruit for them

But, back to the wine, a’Beckett’s grows mainly Pinot Noir and Chardonnay grapes, with several other varietals to round things out.

a’Beckett’s Vineyard doesn’t produce many blends. “We work with the palate we’re given for the year,” Paul explained. “Some are worthy of single, status. Others are best blended.” Chardonnay is the current grape of choice for a’Beckett’s Vineyard’s sparkling wine, while Rosé is always blended.

Part of the a’Beckett Vineyard (©simon@myeclecticimages.com)

From Vine to Wine

There’s much more to producing fine wine than planting and harvesting. The process of clearing out the detritus from the previous year, and tying what remains continues January through March.

No bees are involved with the flowers. It’s all done through air pollination. The challenge during this period is too much rain. Once the flowers and berries are set, it’s 100 days until harvest.

During this time leaf control and vine trimming are in full swing. Once the berries begin to change color – yellow for white and red, well, for red – pest control is added to the workload.

Closer View of the Vines at a’Beckett Vineyard Used for Making English Wine(©simon@myeclecticimages.com)

Harvest generally begins the last week of September, and runs through the first three weeks of October. During this hectic time, the entire family gets involved in harvesting the grapes.

Once the grapes are in, Paul prefers to work off-site with a wine-maker at his winery. There, the process is completed, and the wine is bottled. Then it’s back to a’Beckett’s Vineyard for labeling

From Clueless to World-Class

Paul wasn’t always a vineyard owner. “I worked for an American multi-national,” he recalled, “and I got bored.”

The Langham’s were living in the village next to where a’Beckett’s Vineyard is located. One June afternoon in 1999, Paul and Lynn were sitting in the garden, sipping wine and watching their children play. “Lynn,” Paul said, “we must be able to do this.”

That was the beginning of their adventure in wine. They considered France and Vancouver, which had a similar climate. Then, spotting a vineyard on a leisurely drive, they stopped to have a look. The couple enjoyed the wine, but what made the proverbial light bulb go on was a map showing vineyards all over the country. “We went on a voyage of discovery,” Paul said. “We went out drinking.” That was how the Langhams discovered English wine, and came to purchase the fruit farm now known as a’Beckett’s Vineyard.

By the end of 2000 the couple had a deal to purchase the land. They kept the orchards and removed strawberries, raspberries and beans. They cleared bamboo canes and nine foot tall cut-your-own Christmas trees. “The place was overgrown,” Paul recalled. “It was a mess.”

Although Paul and Lynn had never made wine before, They hired a vineyard consultant, read books and took courses. They completely immersed themselves in the subject. “If you want something,” Paul said, “you’ve got to put the effort into it.”

English Wines Are Here to Stay

Vineyards in England go back as far as the Romans. In the second century AD permission for grape-growing and wine-making outside of Rome was granted. Paul told us that there is evidence of wine production in the village during medieval times.

The climate was warmer during Roman times, and is warmer today than it was 20 years ago. This may explain the 170 wineries and over 600 vineyards in England.

“English wine performs better every year on the international stage,” Paul said proudly. And he should know all about what’s trending. When we visited a’Beckett’s Vineyard, Paul had just completed three years as National Industry Chairman.

And what does Paul like to drink? “A good pint of IPA.” Spoken like a true Brit.

The Truth is in the Tasting

Before we left a’Beckett’s Vineyard, Paul showed us his wine shop located in a cleverly converted stable. There, visitors can purchase his delicious products. He generously sent us off with three of his award-winning wines to try.

The first cork we popped was on Paul’s luscious Pinot Noir, 2014, which earned him bronze medals in both the Decanter World Wine Awards and the UK Vineyards Association “Wine of the Year” competition 2014. This rich red was fresh and fruity with a minute bite of black pepper. The wine was pure decadence paired with our room picnic of fresh bakery bread and the last of our Livarot from France.

We saved the Chardonnay 2014 and the Rams Cliff Rosé 2014 to share with family a week later at their Lake District cottage. 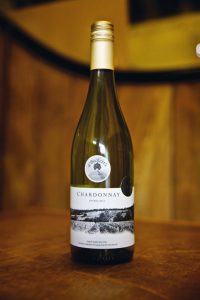 The Chardonnay took home bronze medals at the UK Vineyards Association “Wine of the Year” competition 2014, the English and Welsh Wine of the Year Awards and the Wessex Wine of the Year awards. This wine was a soft yellow, with a fragrance that reminded me of June honeysuckle in Tennessee, but not nearly as heavy. It was crisp with hints of lemon and peach, but I found the finish a little on the sharp side. To be fair, I drank so much Chardonnay in the 80’s and 90’s, it has been a challenge to make friends with it again. 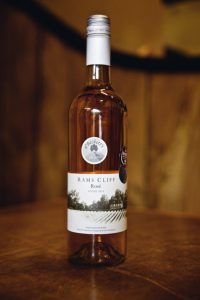 The Rosé was a blend of Pinot Noir and Reichensteiner. It was light and refreshing with strawberry as it’s primary flavor. This wine won the Decanter World Wine Awards 2016 bronze medal, and the silver medal at the UK Vineyards Association “Wine of the Year” competition

According to my uneducated and unrefined taste buds, all three wines were winners in their own way, and I have no doubt a’Beckett’s Vineyard has wines to suit your individual tastes and preferences. So the next time you’re in England, give your palate a treat with English wine in general, and a’Beckett’s Vineyard’s wines, cider and apple juice in particular. Like me, you’ll be pleasantly surprised at what you find.

a’Beckett’s Vineyard is located at High Street, Littleton Panell, approximately 4 miles south of Devizes on the A36.

a’Beckett’s Vineyard wine, cider and apple juice can be purchased locally at Planks Farm Shop at Lydeway, or Edwin Giddings in Devizes. Products can also be ordered online in the U.K. and parts of Europe.

Disclaimer: We are most grateful to Visit Wiltshire, Littleton Lodge and ‘aBeckett’s Vineyard for their combined assistance in making our time in this beautiful, historic English county a true delight. However, all opinions, as always, are entirely my own.