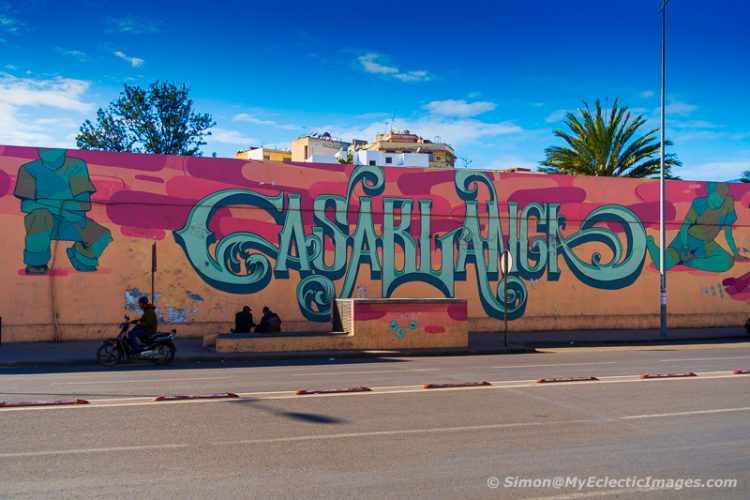 When Time is Short, Go Local.

Casablanca is a city with a rich history, a hodgepodge of architectural styles, and fabulous food. So, how do you experience this delightful city when you only have a few hours? This was our dilemma on our most recent Holland America repositioning cruise. And our answer was the “Medina and Beyond Tour” with Urban Adventures Tours.

We were picked up a short walk from where the Rotterdam docked and whisked away in a van for a four-hour immersion into Casablanca’s culture, commerce, and culinary delights. Our guide was knowledgable, genuine and entertaining.

The time flew by quickly on our part-walking, part-driving tour, and although we didn’t come close to experiencing all Casablanca has to offer, we came away with a good idea of what makes this dynamic city tick.

Casablanca Past and Present

Casablanca was founded by Berbers thousands of years ago. Then came the Phoenicians, Romans, Portuguese and Spanish. In 1755, the same devastating earthquake that destroyed Lisbon seriously damaged a large portion of the city. The Europeans abandoned Casablanca until Sultan Mohammed Abdallah turned the ruins into the Casablanca we now know and love.

In 1492, Ferdinand and Isabella, in the name of Christianity, gave Spanish Jews and Muslims three choices: convert, leave Spain, or be killed. Many fled to Northern Morocco. “Morocco is a mosaic of ethnics,” said our guide. And throughout the tour, he pointed out numerous examples of how the three monotheistic religions live in harmony in Morocco. One striking example was a block containing a mosque, a synagogue, and a church in close proximity to each other.

Morocco is a Berber democratic monarchy with a parliament. Its economy is driven by agriculture (olives and olive oil, saffron, argan oil, and fish). Taking advantage of its long coastline, the country produces about one million tons of fish a year. Industries such as automobile manufacturing, aeronautics, call centers, and crafts comprise another pillar of the country’s economy. Morocco also has the second-largest tourism industry after South Africa and has the fourth-largest port in Africa. It’s no wonder Casablanca is a beehive of activity, and five million inhabitants call this vibrant city home.

We began our tour in Old Medina. This used to simply be called Medina and included the area inside the walls and surrounding countryside. “Medina” means “city”, and this area was Casablanca, until 1912, when the French set up political shop. The area they expanded due to immigration and people moving from the countryside, is now known as New Medina.

We visited the Sqala, consisting of remnants of the fortress built to keep the Portuguese from returning to conquer. Touching parts of old cannons that remained embedded in sections of the walls took me back to that period. I wondered if the people of that time were also inspired by the same views over the ocean from the ramparts.

The Sqala or Old Fort in Casablanca (©simon@myeclecticimages.com)

Old Medina runs between Casablanca’s port and the Hassan II Mosque. The streets were lined with tiny shops. Unfortunately, because it was a Friday, the normally hectic open-air market was closed and deserted. So we had to forego wandering among the stalls displaying taste-tempting Moroccan food, antiques, and handcrafted items. The Old Medina of Casablanca (©simon@myeclecticimages.com)

The New Medina’s architecture is a blend of French and Moroccan styles. This section of the city is charming, vibrant, and jumping with activity. There you will find souks, to satisfy the bargain hunter in you, souvenirs, traditional Moroccan clothing, leather, jewelry and food.

“Carpet Alley” in the New Medina of Casablanca (©simon@myeclecticimages.com)

Had the day of our visit been on any other day than a Friday, we would have partaken in the bustle of the olive market. But plan B did not disappoint. Instead of just viewing the magnificent Hassan II Mosque from the outside, our guide was able to take us on a tour inside this remarkable place of worship.

On King Hassan II’s birthday, July 9, 1980, he made a proclamation. He would build a grand mosque in Casablanca that would serve as a defining landmark for the city.

True to his word, land was appropriated, master craftsmen and artisans labored around the clock, and the mosque was completed in 1993. At an estimated cost of $800 million, the Hassan II Mosque is the third-largest in the world with the world’s tallest minaret soaring to a height of 689 feet.

All but three of the materials used in building the Hassan II Mosque came from Morocco. The magnificent glass chandeliers were imported from Murano, near Venice, the white marble from Carrara, and the titanium doors from Russia. The mosque’s location is almost as spectacular as the structure itself. Both the Koran and the Bible state that the throne of God was over water. And so the mosque sits above the Atlantic Ocean. An automated retractable roof opens for a view of the heavens on fine days, and because marble is cold, the floor is heated.

There was so much beauty surrounding us, it was difficult to know where to look first. Fortunately, our guide shepherded us from one stunning place to the next. When I asked for more description, he rose to the task with enthusiasm. And why not? This mosque is where he regularly prays. An Ornate Door in the Hasan II Mosque Looking Out of the Atlantic Ocean (©simon@myeclecticimages.com)

The prayer hall where as many as 20,000 men can pray was enormous. A separate upstairs gallery with a capacity of 50,000 is where the women pray. Outside the mosque, there is room for another 80,000 worshippers.

Courtyard of the Hasan II Mosque with Space for Over 80,000 Worshippers (©simon@myeclecticimages.com)

The floor of the prayer hall consisted of local marble in shades of beige and carpets of deep red and gray with pink stripes. The cedar roof was hand-carved, as were the walls and columns. The designs were intricate and a treat for the fingertips. The fountains for foot-washing were downstairs and had a grandeur of their own.

Part of the Hand Carved Cedar Ceiling of the Hasan II Mosque in Casablanca (©simon@myeclecticimages.com)

Our guide pointed out symbols of Christianity and Judaism, including a star of David and the 12 tribes of Israel, to emphasize co-existence. I certainly felt a sense of peace and tranquility despite the enormous crowd.

Decorative Tile Work at the Base of the Columns with a Star of David Motif in the Ablution Room of the Hasan II Mosque in Casablanca (©simon@myeclecticimages.com)

I learned, having bought a headscarf in Spain, that female visitors aren’t required to cover their heads. But those praying do. If you visit the Hassan II Mosque, and I strongly recommend you do, be sure to dress conservatively. That means no shorts, sky-high hemlines, sleeveless tops or anything you wouldn’t wear to a house of worship. You will be asked to remove your shoes and be given a bag in which to carry them while inside the mosque. A minor inconvenience, but well worth it.

You can only visit the mosque on a guided tour, so be sure to check for times when tours are available.

Main Entrance to the Royal Palace in Casablanca (©simon@myeclecticimages.com)

Alternating driving and walking, we were able to see and admire more of Casablanca than we would have on foot alone. Our Urban Adventures guide provided us with facts and stories about the fascinating sights we were seeing. Here are just a few highlights:

No visit to Casablanca would be complete without sampling some of its culinary offerings. Our guide led us into temptation at Pâtisserie Bennis tucked away in the souk Habous. This iconic patisserie is located in an old house and serves up freshly made traditional sweet and savory pastries. After sampling a small bite of what was available, we couldn’t help ourselves. We emerged from the shop carrying a box of assorted treats rich with almonds, honey, and chocolate. The sweet blend of flavors and textures in those delectable cookies set our taste buds dancing.

Included in our Urban Adventures tour was a sampling of mint tea served in the traditional style. Our guide poured the tea back and forth from pot to glass from a height of about eight inches. This ritual not only cools the tea down for drinking but is supposed to improve the flavor. I can’t say for sure that it does, but the tea we sipped was some of the best I’d ever tasted. Our tea break was accompanied by a sample of freshly baked pita-like bread (batbout) that was firm in texture and full of flavor. Following our tour, at our guide’s recommendation, we ended up for lunch at Zayna for a shared platter of couscous with meat and vegetables. The dish was enormous and comforting with subtle spices and tender textures. Juices from the meats and vegetables soaked the couscous and gave it an extra kick of flavor.

A Couscous Feast for Two at Zayna in the New Medina in Casablanca (©simon@myeclecticimages.com)

Urban Adventures is an Australia-based company offering tours in 68 countries and 160 cities. All tours are created and coordinated by local teams and are led by local guides.  This means no one size fits all itineraries and cookie-cutter patter. Urban Adventures offers tours focusing on history, food, religion, and other topics that introduce visitors to a city’s finest features.

Although Urban Adventures makes every effort to accommodate all participants, Casablanca is a challenge for individuals in wheelchairs. Between buildings with stairs, occasionally rough terrain, narrow obstructed sidewalks and a lack of consistency in curb cuts, many attractions may be inaccessible. However, there is still much to do and see in the city that can be accessed. As with any tour, it is advisable to contact the local Urban Adventures office to learn what each tour entails.

Disclosure: We received a generous discount on our Casablanca tour courtesy of Urban Adventures. However, all opinions, as always, are entirely my own.