Hardship and Hope at EPIC The Irish Emigration Museum: 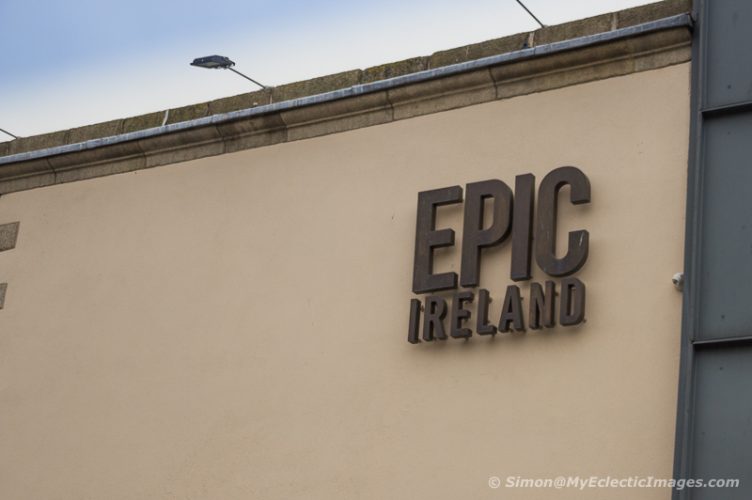 Powerful and Poignant Accounts of Leaving Home and How the World Has Benefitted.

Ireland is like a savory and sweet stew, composed of multiple textures and complex flavors. Throughout the last 700 years, the stew has boiled over, sending its contents out into the world to influence the flavors of other nations and cultures. The story of this Irish overflow is beautifully preserved and exquisitely presented at EPIC The Irish Emigration Museum in Dublin.

Simon, Otto and I had the privilege of visiting EPIC on two occasions. With 20 interactive galleries, representing four themes, and over 300 individual stories of desperation, adventure, tragedy, and success, we had barely scratched the surface on our first visit. On our second walk-through, we took in more detail and began to gain a deeper understanding of their significance. If the opportunity for another visit to EPIC arises, we’ll jump at it. There are still layers we have yet to explore, and much to learn.

The Front Facade of the CHQ Building (©simon@myeclecticimages.com)

It is only fitting that EPIC is located on Custom House Quay (CHQ) along the banks of the river Liffey. In the 1800s, this was the departure point for many of Ireland’s emigrants.

Before entering EPIC, linger for a few moments to absorb the Famine Memorial across the street. These sculptures represent the painful impact of the great potato famine (1845 – 1852) on the people of Ireland. Take in the scene of emaciated men, women, and children fleeing Ireland. Many of these emigrants would ultimately perish en route. Particularly touching was the sculpture of a dog, bones protruding in stark relief. Hunger didn’t discriminate.

Sculpture of an Irish Emigrant during the Time of the Potato Famine (©simon@myeclecticimages.com)

Sculptures of Irish Emigrants during the Time of the Potato Famine (©simon@myeclecticimages.com)

Custom House Quay is also home to a replica of the Jeanie Johnston, a tall ship that carried starving inhabitants of Ireland on 16 voyages to the United States.

EPIC, is the world’s first fully digital museum. Take your time moving through the exhibits and experience remarkable stories as told by Ireland’s emigrants from the middle ages to the present through videos, holographs, original letters, interactive displays, and more.

A Display at EPIC Illustrating the Different Modes of Transport Used by Emigrants (©simon@myeclecticimages.com)

Before you begin your self-guided tour, be sure to pick up your personal “passport”. The galleries are divided into four themes and there will be several locations in each where you can get it stamped.

Migration: Introduces you to Ireland’s migration patterns over the centuries. You’ll meet 16-year-old Annie Moore from Dublin. She was the first immigrant to be processed through Ellis Island.

A Poster Seeking Single Women to Emigrate to Australia on Display at EPIC (©simon@myeclecticimages.com)

Motivation: Examines why so many people left Ireland. The reasons were varied:

Other reasons for leaving Ireland included religious persecution – think Oliver Cromwell – as well as social discrimination. It wasn’t until 1993 that homosexuality was no longer considered a crime and 2015 when Ireland became the first nation in the world to legalize same-sex marriage through public referendum.

Then there were the wars in which there was Irish participation:

Take the time to watch the stories of six Irish emigrants played out on video. They’ll tell you their reasons for leaving, what they hoped to achieve, and their outcomes.

Influence and Connection: These two themes will lift your spirits with stories of how Irish emigrants fared overseas, and how they influenced their adopted countries. They are a celebration of Irish successes in the areas of business, science and politics, as well as sports, music, dance, art, fashion, literature, and storytelling. And let’s not forget eating and drinking.

When you leave the exhibit area, be sure to use your stamped passport to unlock a display, which will enable you to send a digital postcard to a friend or family member of your choice

Since it opened on May 6, 2016, EPIC The Irish Emigration Museum has moved and fascinated visitors from Ireland and abroad. But the building that houses it has a history of its own.

Built in 1820, CHQ was originally used as a bonded customs warehouse storing tea and coffee, as well as whiskey, wine, and tobacco. Constructed of brick and cast iron, it was the first fireproof building in Dublin.

EPIC is entirely privately funded. Former Coca-Cola chief executive Neville Isdell – an emigrant from County Down – purchased CHQ for €10 million in 2011. The Dublin Docklands Development Authority had converted it into a shopping center immediately prior to the economic crash of 2008 and only a quarter of the building was occupied when Isdell took possession.

An advisory group was formed in 2015, to help develop EPIC. A panel of academic and expert advisors created the museum’s content, and the exhibition itself was designed by Event Communications, the same organization that had worked on the stunning Titanic Belfast.

Heroes and Villains of the Irish Diaspora

Over seven centuries, 10 million people have left Ireland resulting in 70 million worldwide who claim Irish heritage today. Most live and have lived normal, uneventful lives, but some of the following well-known individuals may come as a surprise to you:

The largest number of Irish descendants live in Canada, the United States, the United Kingdom, and Australia. Surprisingly, Argentina’s 1 million citizens of Irish descent are the result of approximately 50,000 people who emigrated from Ireland.

Irish emigration has benefited global society in more ways than we can count. And even those who wrought havoc have left behind legacies from which we have learned much. It’s the indomitable Irish spirit of survival, generosity,

Courage, and adaptability that is Ireland’s gift to the world. Irish pubs can be found in far-flung corners of the globe. St. Patrick’s Day is celebrated in towns large and small around the world, and not solely by those of Irish descent.

The music to which we listen, the books we read, the belly-warming lamb stew we savor, the Guinness and Jameson whiskey with which we wash it down, the phrases we use daily and historic events that touch our hearts, all represent the Irish diaspora.

If you visit Dublin, and I hope you do, your first stop should be EPIC The Museum of Irish Emigration. There is nowhere better to prepare yourself to embrace the Ireland of today than by meeting those who left her shores.

Reservations are recommended, but not necessary. Special rates are available for groups of 10 or more and must be booked in advance.

Disclaimer: Our heartfelt gratitude goes out to EPIC The Emigration Museum for hosting us on both our visits and to Failte Ireland for hosting us during our time in Dublin. However, all opinions, as always, are entirely my own.